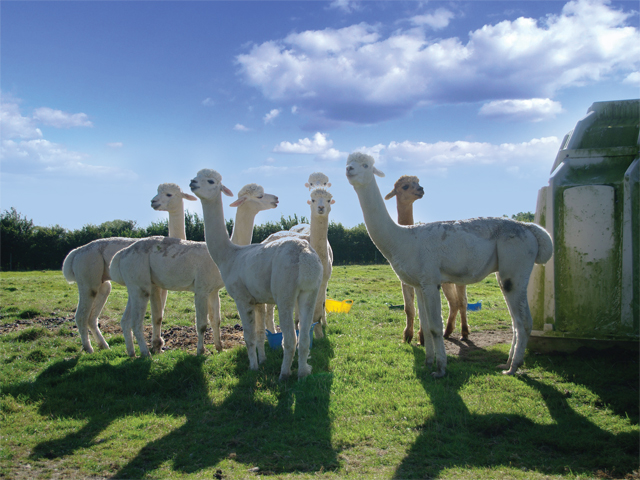 Coats of many colours

When asked what they love about alpacas Leslie and Elaine Reetham, almost in unison, said: “They are very calming and they never hesitate to make us smile.”
The alpacas are kept on Leslie’s family farm at Great Carlton, near to Louth. Leslie was born on the farm but Elaine has a completely different background, originally coming from the London area. However, she is fully immersed in her world of alpacas and products made from their fleeces.

South American in origin, the unusual animals first caught Elaine’s eye in a television documentary. After thorough research, four pregnant females were brought onto the farm. That was about six years ago and now she has a herd of thirty-one.

“They are definitely addictive,” she said, “but they are not to be taken on lightly. They need very careful care and you cannot keep one on its own.”

A trip to the paddocks soon confirmed what she had said about their soothing effect. The small herd were gently moving about and showed a great deal of curiosity about anyone who was new to them. To be among them you need to be quiet and not move suddenly. They can be a little skittish but not aggressive. Thriving on a lot of human contact will make them tame and some of the older ones were eating out of Elaine’s hands. They are almost hypnotic, with huge eyes and long eyelashes.

“They need a lot of attention and then they become very tame and easy to handle,” said Elaine. Part of the camel family known as camelids, one pale brown one certainly had the look of a camel with its long neck and cloven feet. Many colours of fleece range from true black to white.

Their chequered history means that numbers declined severely after the Spanish invaded South America in the 1500s, but numbers have grown with approximately three million in Peru alone. Bred in many parts of the world, their popularity is still growing.

Elaine explained that they do not like prolonged wet weather and have to be carefully monitored and provided with shelter.

Two distinct types of alpaca give very different fleeces. The Suri’s fleece is much prized, being long and silky, growing into dreadlocks. It is used in the making of men’s and women’s high quality suits. The Huayaca’s fleece is more compact, but also very silky.

“Inca people used to make robes from the wool and the quality of the wool is comparable to cashmere,” said Leslie.

Baby alpacas, called crias, are usually born in daylight and are up and running in about twenty minutes. They are very endearing and I met Errol, born only four days previously to Maggie, a rose grey alpaca who has a dappled appearance. They make excellent, devoted mothers and the crias are weaned when they are about six months old.

Alpacas are generally very quiet, only making a gentle humming noise. The males can be boisterous at times and more vocal, particularly if competing with other males.

The longer outer hairs on a fleece, called guard hairs, protect the lower part of the fleece.

Alpacas are sheared once a year. Australian shearers travel around the world being welcomed onto the farm each April.

Along with their own fleeces from the farm, Elaine and Leslie take in alpaca fleeces from all over the country. They run Farrlacey Mill at Holmes Court, in Horncastle.

At the mill, with the help of dedicated staff, they produce alpaca products of the highest quality. Their most impressive product is an alpaca fleece filled duvet, along with pillows and cushions. It takes about thirty-kilograms of fleece to make ten duvets.

The work is labour intensive and the fleeces go through several processes. These include hand picking the fleeces to remove grass and loose dirt and placing the fleece on a ‘hamster wheel’ to further remove any dust. The fleeces are then put into nets and washed in an industrial washing machine. There are several more stages after drying, including conditioning and carding.

The final material is called batting. It is laid out with all the hairs going one way before being placed and stitched into a dense cotton cover by a skilled quilt maker and secured in such a way that the fleece does not bunch up or ‘mat’ inside. Eventually organic cotton may be used for the covers.

Sheep fleeces from all over the country are taken in, processed and spun into wool which is returned to the owner.

A loom has been set up and woven articles, such as blankets and scarves, are produced. Alpaca wool is often blended with other fibres, such as merino wool or silk, to produce a very smooth fabric. The products are also exported.

Elaine said: “I feel there is a resurgence of interest in the old skills.”

Sheep and alpaca owners must get a lot of satisfaction from receiving the spun wool or products back from their fleeces.

There is a shop open to the public which sells the products, and even teddy bears. The bears are individually made from felted alpaca fleece and make a delightful present. The wool is also suitable for making fine pashminas.

On the premises, spun Alpaca wool is dyed in a selection of warm colours in small batches and one ball will knit up into a beanie hat. The end products are very soft and cosy.

Local knitters create some warm, durable garments including snoods and gloves. With her enthusiasm, it is plain to see that Elaine’s products will always be of the highest quality and a warm welcome is ensured for visitors to the mill and shop.