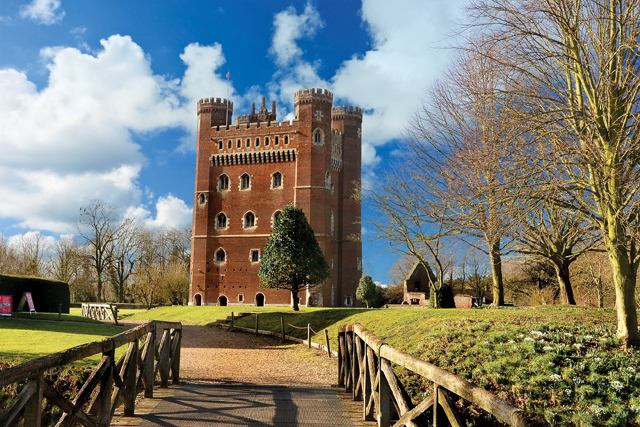 Communities with tales to tell

The small but busy village of Tattershall, situated between the Fens and the Wolds of Lincolnshire, has much to offer not only local residents but visitors from all over the country.
For the historians among us, there are a number of interesting historical features to explore within walking distance of each other, including the imposing Tattershall Castle. Of interest to conservationists, bats regularly roost in the crevices of the Holy Trinity Collegiate Church and have been resident there for centuries. And for the RAF enthusiasts, the Battle of Britain Memorial Flight is based at the neighbouring RAF base at Coningsby, just a stone’s throw away.

Tattershall even has one of the best holiday parks in the county, with first class watersports facilities, fishing and golf.

It has takeaways to suit all tastes, long-established pubs which probably have a tale or two to tell, a traditional barber’s shop, a craft and hobby shop and even its own Post Office and supermarket.

Located within the long-established Richard Sivill Gallery – which offers a full framing service, trophies and trophy engraving together with arts and crafts supplies, specialised gifts and Memory Lane pictures – there is also a delightful little traditional sweet shop, with jars of different flavoured bonbons and confectionery lining the shelves.

The gallery is run by Richard and Stella Sivill who have been connected to Tattershall for nearly seventeen years and the sweet shop which also sells cards, jewellery and gifts, is in the hands of their daughter, Michelle.

It was opened in November 2013 by Alexandra Clarkson and her husband, Martin who settled in Tattershall from the north-east five years ago and spotted a gap in the market for good quality children’s clothes.

“It is such a nice village and everyone is very friendly,” said Martin, who was a hotelier for twenty-two years and now runs all the functions at The Old Palace in Lincoln.

“There are three primary schools within a two-mile radius and we got to thinking that, if there are so many children in the village area, where do parents have to go to get good quality outfits for them? We opened last November and have been doing well.”

The shop stocks top name collections from France and the USA which are proving highly popular with the local youngsters.

“We do an expensive range but we also do mid-range outfits too. We are the only supplier of La Queue du Chat from France and we stock OshKosh, which is all the rage in America,” Martin added.

If you take a walk round the village, Tattershall Castle is a good starting point. A unique fifteenth-century red-brick castle, it is the first thing you see as you approach the village.It was the work of Ralph de Cromwell, Lord High Treasurer of England between 1434 and 1447, as a display of his wealth, power and ambition under Henry VI. There are six floors to explore and a spiral staircase with 149 steps to climb, but there are stunning views of the Lincolnshire countryside from the top.

This year is an important one for the Castle. It is 100 years since it was reopened after its restoration by Lord Curzon of Kedleston. It remains today one of the three most important surviving brick castles of the mid-fifteenth century.

The Castle’s visitor experience officer, Paul Robinson said: “It was opened to the public four days after World War One was declared in 1914. The Castle was a shell. It was used as a cattle shed and the Moats had been filled in. We are hoping to get some of the items that were collected from the Moat during the excavation and we are looking for old pictures of the castle too.”

The Castle comes under the umbrella of the National Trust and has a programme of changing themes through the year.Development work at the Castle is an ongoing programme but one matter which needs urgent attention is a toilet block built by Lord Curzon.

“It is falling into the Moat. The rabbits have burrowed away at the foundations and if we don’t do anything about it this year, they will disappear into the moat,” said Paul.

Neighbouring the Castle are the village’s Bede Houses – built in 1440 and restored in 1967 – and the Holy Trinity Collegiate Church which is one of the finest examples of English perpendicular architecture in the country.

The Church was completed in 1500 AD having been endowed in 1439, by King Henry VI, with Collegiate status. A Collegiate Church is one that has attached to it a Chapter of canons and prebendaries – priests whose livings are paid through endowments and by the income from land or tithes.

One attraction helping to put Tattershall on the national map is Tattershall Lakes holiday park. Regarded as one of the best holiday parks in Lincolnshire, it is dominated by lakes that are set aside for watersports of all kinds including waterskiing, jetskiing and wakeboarding.

It also offers a full eighteen-hole golf course, fishing lakes, a spa and a gym, making it an important part of Tattershall’s fabric.

The site’s holiday homes sales manager, Liam Lucock said: “We provide facilities for the local community and also the holidaymakers to the area and support local businesses. We have several developments underway, including an outside landscaped entertainment area, an amphitheatre in the water and a heated paved pergola. We are also putting in our first beach in the lake with a walkway bridge onto it and we are also developing forty-two more bases for static caravans and lodges.”

Tattershall Lakes has always been a holiday park but fresh investment has come from new owners.

“The current company has four parks throughout the country and Tattershall is its biggest. We have seven lakes on the park and several lakes on the eighteen-hole golf course. There is a purpose-built jetski lake, a purpose-built waterski lake and three fishing lakes. Everyone can use the facilities and we are open all year so we are very busy.”

TOM THUMB AND THE BATS
No visit to Tattershall would be complete without a look inside the Holy Trinity Collegiate Church, a close neighbour of Tattershall Castle.

It is a Grade I listed perpendicular-style church, endowed by Ralph de Cromwell, 3rd Baron Cromwell, but built after his death. It received its charter from Henry VI in 1439 but building did not begin until 1472, reaching completion around 1500.

Visitors are intrigued when they enter and find one of the flagstones near the font marked with a floral display on a tiny stool engraved T Thumb 1620.

Legend has it the plaque marks the grave of Tattershall resident Tom Thumb, who was reputedly only 18.5 inches (47cm) tall and who died in 1620 aged 101. Tom Thumb’s small house can be seen on the roof of a larger house in the Market Place.

Another interesting fact about the church is that it is home to a number of bats and has been for centuries, even from the early days.

Stone churches are like caves to bats and the Holy Trinity Church offers a range of conditions suitable for roosting throughout the year, including warm crevices for mothers to rear their young in the summer and cool humid places in which to hibernate in the winter.

Members of the Lincolnshire Bat Group undertook a survey over two different days in June last year to try and establish bat numbers in the church.

On the first day, 14th June, it revealed there was a total of 476 soprano pipistrelle bats and 111 Daubenton’s bats located across three different areas of the church and one in the castle.

On the second day, 28th June, there were 373 soprano pipistrelles and eighty-two Daubenton’s in the same locations.

Bat populations have declined dramatically during the past century and now all British bats and their roosts are protected by law.

Just up the road from Tattershall is the town of Coningsby, which is famous for its RAF base and the Battle of Britain Memorial Flight.

However, it does have some other interesting features such as the clock on the tower of the fifteenth-century parish church of St Michael’s.

As well as only having one hand, its face is painted directly onto the wall of the tower and is thought to have been installed in the seventeenth century.

It is one of only a few one-handed clocks in the country and is reputed to be one of the largest of its kind in the world measuring just over sixteen feet in diameter with the hand being nearly nine feet long.

It consists of a Lancaster, five Spitfires, two Hurricanes and a Dakota and they can be regularly seen at air shows during the summer.

Unsurprisingly, there is also a war memorial which was built by Thomas Kent of Boston and erected in memory of those who lost their lives in the Great War of 1914 to 1918.

It is made of broken Aberdeen red granite on a Portland stone base. The broken column depicts the broken lives of those young men and women who perished in the war.