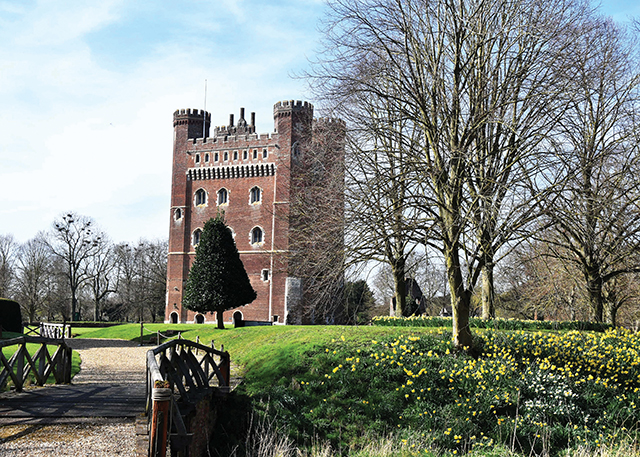 Coningsby and Tattershall come together

Barbara Young finds out how the communities in these neighbouring villages are united through volunteering efforts.

Located between the Lincolnshire Fens and Wolds, the villages of Coningsby and Tattershall show a rare mix of iconic historic buildings and modern living, with the two communities sharing a close bond.

Taking pride of place in Coningsby is St Michael’s Church with its unique and striking 17th-century single-handed clock with a diameter of more than 16ft towering over the high street. The nearby RAF base, built before World War II, is home to the Battle of Britain Memorial Flight and a number of historic aeroplanes, as well as being the Main Operating Base for the RAF Southern Typhoons and home to two frontline, combat-ready squadrons.

Just a short walk away, in Tattershall, lies the National Trust’s historic Tattershall Castle, which has become a popular visitor attraction, being one of the select few built from red brick by the powerful Treasurer of England Ralph de Cromwell, 3rd Baron Cromwell (c.1393-1456).

Paddy Donnellan, chairman of Coningsby Town Council, explains that with Coningsby and Tattershall occupying a parcel of land, “bisected, rather than divided”, by the River Bain, the communities remain close.

“For decades, the RAF station has brought people from all over. They have joined the community of local families, whose members live both sides of the river and the community groups including the Lions, The Royal British Legion, Helping Hands, The Luncheon Club and the youth groups, have memberships which straddle the River Bain and many people are members of several organisations – it’s like the fibre which holds us together.”

Sense of community
Michael Phillips from the Coningsby & Tattershall Lions, which has 30 adult volunteers as well as 18 younger “Leo” members aged between 12 and 18, agrees: “The villages have long found themselves united by their shared sense of community which is evident in many of the combined voluntary initiatives as residents come together to help each other.

“Prior to lockdown, we ran a weekly youth club for the Leos, 12-17 years; a Lunch Club for seniors; and a community venue, The Lions Den, for Coffee & Chat, and for local social groups.

“Since lockdown, we have delivered fresh food to needy people; delivered medical prescriptions for those who had to remain housebound and assisted at Louth Hospital for the Covid vaccination roll out.

“Several stores provided short dated food, which would otherwise be wasted, for distribution by Lions and it’s become a community support effort.”

Michael says there has long been a strong community spirit in the area and once restrictions allow, the Leos will meet weekly both socially and to plan future events in The Lions Den, a converted bungalow leased by the Lions as a community centre in order to help raise funds.

“The community venues in both Coningsby and Tattershall are well supported; there are several diverse-interest groups, in fact something to interest everyone!” says Michael. “We hope to be able to hold our annual Beer & Cider Festival in August and looking further ahead, will most certainly be escorting Santa in his sleigh throughout December and also hoping to stage our annual pantomime next January.”

Another local initiative which has been welcomed by the community is the Pingle Local Nature Reserve, an eight-acre grass and woodland site formed from a previous railway embankment and small excavated gravel pits, owned by the Lions.

“The area at the eastern end of Coningsby on the A153 is open to the public and is in regular use by families and dog walkers; there is a scenic walk through part of the woods alongside a fresh water lake,” says Michael. “The Lions fund the grass-cutting and manage the trees and flower meadow, while the Leos are responsible for several planters in Coningsby, ensuring they are watered and replanted when necessary.”

Tackling litter
Kathy Roberts, clerk of Coningsby Town Council, says there remains a sense of pride among both communities to keep the surrounding areas looking their best.

“We as councils are very proud of our communities, the young and the not so young, working together. Our army of volunteer litter-pickers, who are known as the ‘Wombles’ [named after the famous inhabitants of Wimbledon Common] get together every week with the aim of getting rid of accumulated rubbish in the villages and surrounding areas.

“Since lockdown, people want to get out and do something positive for the area and we currently have around 150 volunteers. People are enjoying seeing the difference they can make, giving us all pride in the areas we love to walk, ride, live and work in.

“Everywhere people had become possibly a little isolated and this is gently bringing us out and doing a great job improving the area. The local public rights of way are better for the litter-pickers’ visits; we are lucky to have some of the most beautiful walks, which had previously sadly become cluttered with litter over the past year.”
Kathy says that volunteers are collecting up to 60 bags a day at weekends and around 10 to 15 a day during the week.

“We keep expecting it to slow down, but the litter keeps on being found; everyone is so pleased with the results and it’s an amazing community spirit. The really good news is that now we are receiving messages saying how lovely it is to walk the footpaths and drive through the area which is free of litter. People are talking to each other, planning for socially distanced trips out to clear the litter.”

Kathy says East Lindsey District Council has been “extremely generous and helpful” by donating litter-pickers’ bag hoops and bags, as well as providing funding for hi-vis jackets as part of the government scheme to help bring communities back together.

This is only one of many local initiatives which the Coningsby and Tattershall with Thorpe parishes have worked on together and there are also annual awards presented to those who have shown an outstanding community response. Each year both councils award trophies to the person or organisation who, in their opinion, has done the most for the village in the previous year: the Manning Trophy at Tattershall with Thorpe and the Rickard Trophy in Coningsby.

The joint Youth Awards, which has been running since 2009, is divided into two age groups – up to 10 years and 11-18 years – and sees youngsters nominated as individuals, with winners receiving a cash voucher and plaque engraved with their name.

More recently, Kathy says the town councils have worked together to purchase speed reduction equipment and train ‘Community Speed Watch’ volunteers to educate drivers through the villages with calibrated speed guns supported and run by the Road Safety Partnership.

Paddy Donnellan says he believes that “Covid and the lockdown, like any adversity, have brought out the best in people”.

“When you look at the work of local community groups, the spirit can only be described as ‘fantastic’,” he adds. “Some good things will come out of this wretched pandemic and I think that people being prepared to pull together, for the common good, will be one of those things.”

GINGER COW WELCOMES BACK CUSTOMERS
GINGER Cow, Coningsby’s family-run licensed café and bistro, is offering a refreshed menu during outdoor opening in April, with additional outside seating, thanks to the local Lions Den, until they can open fully in May.

“We look forward to welcoming our customers back to dine with us after such a long time and have extended our breakfast and lunch menus to suit both diners and takeaway customers,” explains owner Diana Connolly, who has run this popular café for the past seven years.

“New on the menu are the ‘grab and go’ freshly filled baguettes and our homemade burgers which are a combination of rich flavours and tender juicy textures. We can’t wait to finally serve them to you at the table.”

Since lockdown the owners of Ginger Cow say they have brought more of their baking in-house, which now includes scones and tray bakes, as well as their new range of individual cheesecakes.

During lockdown, the Ginger Cow team offered a popular takeaway and delivery service for almost any item on their menu, but say it was their Afternoon Tea Boxes that really helped to support them during this time.

Once fully re-opened, Ginger Cow’s Full Afternoon Teas will be available once again to enjoy and savour at the table for that special occasion.

During the past few months the kitchen has been upgraded to include a barbecue griddle for steaks and burgers, so once fully open again, they will be hosting their popular Gin and Burger (or Steak) evenings.