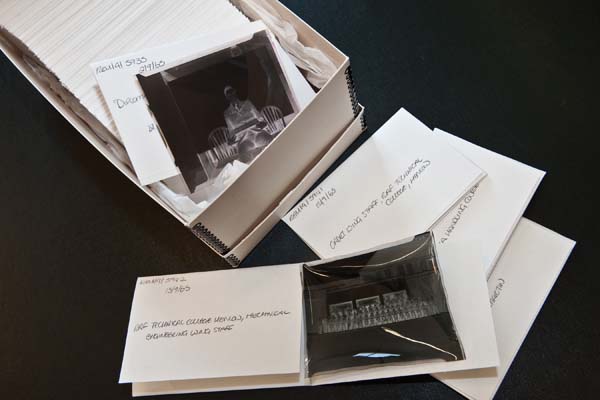 Conserving the treasures of Cranwell

Royal Air Force College Cranwell is overtly grand in both appearance and reputation. Members of the Royal Family, Prime Ministers and even Lawrence of Arabia have all graced the corridors. But the work that goes on behind the scenes to uncover and preserve priceless artefacts and heritage is equally as spectacular. Curator Hazel Crozier showed Alison Sandilands around…
Wearing special white gloves, Hazel carefully leafed through an original copy of Sir Walter Raleigh’s ‘History of the World’. At 400 years old, it is looking rather worn and it is her job to minimise any further decay. We are in the College Library – a real treasure trove of history containing more than 60,000 books, reports and documents. The smell of old books fills the air and the surroundings do not look to have changed much since the 1930s, when the College Hall first opened. This space is still a working library and the subtle studying sounds of whispering and pages turning can be heard.
Hazel is the first curator ever to have been taken on at the College and has spent the last two years periodically going through numerous photographs and documents in order to re-catalogue them in a more preservation-sound manner. On a table in a quiet corner of the library, she has laid out some of the most treasured literary works and interesting documents. This includes a copy of TE Lawrence’s ‘The Seven Pillars of Wisdom’. The author, famously known as Lawrence of Arabia, served at RAF Cranwell as an aircraft mechanic from 1925-26 under the pseudonym Aircraftman Shaw. This edition is particularly special because the pages have been annotated with the handwriting of the author himself.
In tribute to TE Lawrence, the north room of the library is called the Lawrence Room and features wartime letters and reports. There are letters from Montgomery and Mountbatten and combat reports from the World Wars describing engagements with the enemy in vivid detail. The ends of bookcases in the main reading room feature drawings depicting a flying accident in March 1942, where a Whitley bomber crashed into the College killing the three crew members and badly damaging the building. A plate taken from the aircraft’s engines is also on display here.
A conservation project currently being worked on is the re-cataloguing of negatives from courses and visits to the Technical College, RAF Henlow, from 1958-1973. Hazel explained how some of these images were damaged beyond repair after being poorly stored for many decades.
She said: “Envelopes and boxes of this era would have been very acidic, causing damage to the artefacts because they deteriorate quicker, as the acid eats into them. In the past these negatives were stored so tightly that many of the glass negatives have broken and many of the acetate negatives are crushed. These are handled as little as possible to prevent further damage. If they are handled, it is with purple nitrile gloves rather than the usual white gloves. Eventually it will be an aim to have all of these negatives made into prints so that they do not need to be handled again.”
In order to conserve the negatives, they are placed in boxes loosely with acid-free tissue padding around the edge.
A slow but rewarding element of the curatorial work has been delving into the vast archives. Located at the back of the library, the archive room is a drab stack of grey file units. Yet within these drawers many exciting discoveries have been made by Hazel, including images of the South Airfield Hangars under construction in 1916 and a set of reconnaissance reports sent from behind enemy lines in Germany in 1914.
Earlier on in the day, Hazel showed me around the College Hall where the best artworks adorn the walls. Famous faces stare from all directions in the form of striking, lifelike portraits. Winston Churchill, the Queen and the Duke of Edinburgh are all represented, with an incredible likeness. A close look at some of the paintings revealed ripples and cracks. Hazel said this damage had been caused by humidity issues over the years. To prevent further deterioration, she has set up dehumidifiers with absorbent crystals to soak up moisture.

Among the collection of paintings is a piece by seventeenth-century Flemish artist Adam Frans van der Meulen that is worth a staggering £2 million. This is located in the Trenchard Room and was a gift from the Duke of Newcastle estate in 1939.

New artworks have recently been welcomed, such as an oil painting entitled ‘To Be A Flight’, depicting an English village scene in the 1930s, with an Avro 504 flying low over a cricket match and a young man in a sports car driving along, wistfully looking up at the aircraft. Original oil works have also been received from the soon-to-close RAF Cottesmore, including a large, wooden framed nineteenth-century painting by German artist August Wilhelm Leu, of a Norwegian mountain scene, which will shortly be hung in the Trenchard Room.

In Hazel’s office I notice a poster on the wall featuring pictures and details of different types of insects. She explains how the College is now a year into a pest management plan – trapping bugs that cause damage to artefacts. This includes silverfish, which eat paper and starch. One way of controlling pests is freezing artefacts and placing new pieces in quarantine.

Hazel said: “There is still much more to be done to bring the RAF College’s collection of historical treasures up to complete conservation standards of storage, documentation and preservation. However we have made a good start and I hope that the same amount of progress will be made in 2012.”

THE TANTALUS COMES HOME
The professional highlight of Hazel’s year has been the addition to the collection of a ninety-three-year-old, three-piece crystal glass, wood and silver decanter set. She said: “Not only is this item pleasing in itself, it has a wonderful provenance that is interwoven with the history of HMS Daedalus and RAF Cranwell.”

The Robinson family owned and ran the post office at Cranwell from 1916 until 1976 over three generations. Donor Nick Robinson is the grandson of John William Robinson, the first postmaster to run the Cranwell Post Office.

The Tantalus, as it is called, was presented to John in 1919 in appreciation of his work. In his position as postmaster, John met many people and befriended two station celebrities. One frequent visitor was TE Lawrence. The other was Prince Albert (later King George VI). From February until August 1918, Prince Albert was Officer Commanding of the Boys’ Wing and 4 Squadron on West Camp. The Prince would regularly converse with John on matters affecting the boys’ welfare. On several occasions in 1916 both gentlemen used their own money to cash postal orders for the boys when there was a shortage of change to pay the apprentices. After the Second World War, King George VI visited RAF Cranwell to review a graduation parade and asked if John was still at the post office. On the assurance that he was, the King requested a visit and proceeded to have fifteen minutes with him reminiscing.

The next family member to take on the post office was Stanley Robinson. He was equally as active in the life of the station from 1945 until his retirement in 1976. Being a good pianist, his claim to fame was that he was a founding member of what became the RAF College Band.

Hazel said: “The Tantalus is back home and will be on permanent display here. There must be numerous artefacts which are still out there and I look forward to finding out just what other gems of RAF Cranwell history are to be discovered.”