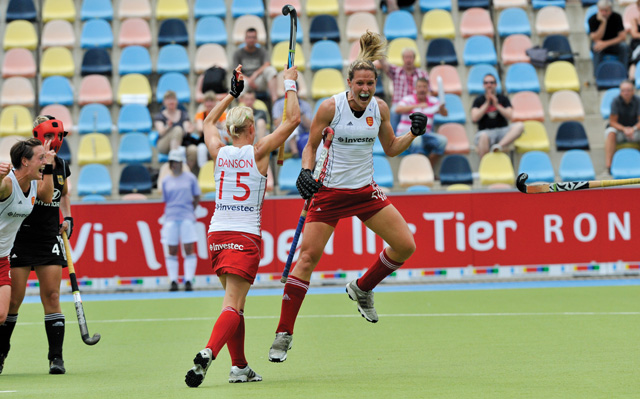 “I like the open space, and the county has definitely been a large part of my life. Africa was already in my blood, and Lincolnshire is very different to Kenya, but both have that element of space. There is definitely a similarity.”
While perhaps unwittingly creating a new marketing campaign for Visit Lincolnshire, Team GB hockey player Crista Cullen succinctly remembers a childhood split between our own sprawling fenlands and the savannahs of Kenya.

Such an environment proved conducive to a burgeoning athletic talent who has grown up to be a key member of the team looking to take Olympic gold at London 2012. Up until now, they’ve been so near and yet so far, with a series of European Championship and Commonwealth Games bronze medals, but Cullen is confident of taking that next step.

“We are one of the only team sports expected to earn Great Britain a medal and I think that’s a realistic ask,” she said. “We just need to make sure that we do the business. Any medal is a great achievement, but when you’re a little kid and you dream of going to an Olympic Games, you don’t dream of being third. It’s always your anthem that is playing.

“We have been in a lot of semi-finals and not come up trumps. That is an incredibly frustrating place to be,” said Crista, “but you learn so much more about your team and the personalities when you lose. If I have to lose every semi-final to get to London and win that gold medal, then so be it. All the pain will be worthwhile.”

Born in Boston, and lodging with a guardian on his farm near the town during her time at Oakham School, Cullen was born into a very sporting family. With a golfing father, a mother who was a professional squash player and a brother who has played international rugby for Kenya, she took full advantage of the opportunities afforded by her African upbringing.

“My parents never pushed me into anything, ever,” explained Crista. “It was very much me being slightly bossy and bolshy that got me into sport. It didn’t matter which sport I was going to be involved in, I just loved being outside. I played lots of sports at school, but I got involved in hockey quite early and decided that I wanted to be part of a team.

“Having my mates around me and enjoying experiences as a group became more important to me, so I decided that hockey was what I wanted to go for. And it seemed to be the one that took off for me – right place, right time and in front of the right people. I was very lucky.”

150 international caps and two appearances in the annual World Hockey All-Star Team later, to suggest that luck played more than a fleeting part in her success seems perhaps overly modest. A strong defender, blessed with great pace and agility, and famously adept at short corners – the sport’s key set-piece – Cullen hopes to follow in some revered but increasingly distant footsteps.

The 1988 and 1992 Olympics proved highpoints for British hockey, as the teams led by Sean Kerly and Jane Sixsmith brought home medals from Seoul and Barcelona. The sport has endured a somewhat lower profile since then, but 2012 (along with a new long-term sponsorship deal with bankers Investec) provides the perfect platform for all ‘minority’ sports to grab headlines.

“It’s a huge boost,” said Crista. “Kerly and Sixsmith became household names and it’s important for the sport that we get medals. There’s no getting away from it – consistent performances and winning medals is how you gain public recognition. So we need to ensure that we perform consistently throughout 2012 and build on our previous successes.”

Her training schedule continues to increase in intensity during the first half of 2012, including the vital Champions Trophy tournament in Argentina in January following almost immediately after a winter training camp in the December sunshine of San Diego.

However, at odds with many people’s perceptions of an Olympic athlete, Cullen continues to balance her hockey commitments for Leicester and Great Britain with a day job in sports recruitment.

“Unfortunately hockey is not something that people can generally make a living from,” she explained, although a number of the GB team are now full-time. “I took the decision that I wanted to do things that other twenty-six-year-olds do – get themselves on the property ladder, have fun with my work colleagues – and not come out of an Olympic Games without any sort of work experience.

“My bosses have really supported me, but since October I’ve had to reduce my hours. I love having the balance between my ‘real life’ and my training schedule, but it isn’t realistic in the build-up to an Olympic Games.”

London, of course, will come around almost too quickly, and every athlete can only hope that their preparation pays off. Having already come this far, the motivation and sacrifice required to make sure it’s ‘alright on the night’ are reassuringly familiar to Cullen.

“I think most athletes would say that there’s an element of self-drive, to do that extra training if you really want it. No matter what anybody says, if you really want to do something, you train hard enough and grab it with both hands.

“It would be so frustrating to ever be in that position, if somebody told you that one day you could play for England, and then you don’t pursue it. You never want to have that element of ‘what if?’ – what if I had really gone out there and trained hard?”

Then again, the prospect of a sold-out Olympic Park hockey venue, with the increased levels of expectation always placed on the hosts, might be a scary prospect to some.

“Home advantage isn’t daunting, it’s like having an extra man on the field to carry us through,” said Crista. “The atmosphere is going to be electric. It’s a beautiful arena and it’s what gets you out of bed in the morning and makes you train so hard.

“I can only dream of what a 16,000 capacity crowd shouting for Great Britain will be like. It’s going to be a unique experience and we have to embrace it.”

A gold medal would represent so much more than personal achievement for a team apparently ready to peak at just the right time. Crista is well aware of the legacy it would create for everybody involved in the sport.

“We need people to pick up hockey sticks again. We are a huge participatory sport but we could still have more,” she added, preparing to return to the photographer’s studio for another afternoon of promotion shots that will hopefully push the sport further into the public’s consciousness. “Our success would ultimately filter through to grassroots level, and that’s what really matters. They are our Olympians of the future and we need those kids who have the talent and the drive to be in our sport.

“We need people to be enjoying the sport, to have the role models and the training from the elite players – to give them experience of something that I have grown to love so much.”