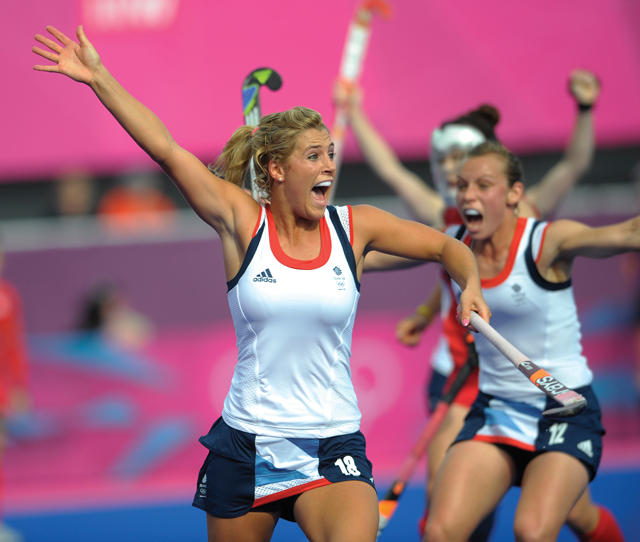 County Olympians experience the pain and the glory

From a gloriously eccentric Opening Ceremony to the inspiration of Super Saturday, iconic images of the Greatest Show on Earth showcased a country united in the joy of sport.
For two wonderful weeks, these trivial athletic pursuits became the most important and thrilling spectacle in the world. Every emotion was played out in the faces of Team GB’s heroes – and Lincolnshire’s finest played their part in the quest to inspire a generation.

Boston’s Crista Cullen was the hockey tournament’s joint top scorer as the British women’s team earned their first Olympic medal for twenty years. Five goals, all courtesy of her legendary skill in converting penalty corners, proved crucial, including one of the goals which illuminated a resurgent performance in the bronze medal play-off.

New Zealand were beaten 3-1 and while it may have been another bronze for a team perhaps too accustomed to coming third, this time it represented success not failure.

“A gold medal was what we had spoken about for so many years and that was what it was about, but we picked each other up and put our arms round each other,” explained Cullen, having been “gutted” to lose the semi-final against familiar foes Argentina. “We said we’d give every ounce of blood out there and that’s what we showed.”

The three wins with which they began the competition were followed by three disappointing defeats and ultimately they needed a shock defeat for China to ensure qualification. Fellow Bostonian Hannah Macleod, one of the side’s hardest working attacking players, rightly identified that the team showed “immense character to pick ourselves up” from a sluggish semi-final display to fulfil their promise of winning a medal.

Cullen’s strength and anticipation made her the defensive fulcrum of the side, complementing perfectly the sparkling creativity of Georgie Twigg. The effervescent performances of the youngest member of the squad, who scored a superb goal against Korea during the group stages, prompted fans to paint a postbox in her home village of Doddington bronze.

The Great Britain men’s side, however, could not lift themselves for the knock-out stages. Qualification came easily as the team, featuring Grimsby’s Glenn Kirkham as a formidable presence in midfield, started with an impressive win over Argentina and embarked upon a five-match unbeaten run. Thereafter, though, their pursuit of a medal unravelled in spectacular fashion.

A crushing 9-2 semi-final loss to the Netherlands became their biggest ever defeat, and Kirkham admitted that the team let themselves down. While a degree of pride was restored in the bronze medal play-off, it still brought a 3-1 defeat to Australia which was exacerbated by more uncharacteristically sloppy defending.

Already a relative veteran at the age of twenty-nine, Kirkham will now consider his future as an international hockey player, although the prospect of competing in Rio de Janeiro in 2016 may convince him to delay retirement.

Also excited at competing on Brazilian soil will be Team GB’s footballers and, with London 2012 hailed by some as ‘the women’s Olympics’, Casey Stoney’s team certainly struck an impressive chord with many previously cynical fans.

Captain Stoney, a reassuringly composed presence at the heart of the defence, hailed the 1-0 win against Brazil, at a virtually sold-out Wembley, as “the best night of my life so far”. Sealing a quarter-final qualification with a 100% record and without conceding a goal, Great Britain owed a huge debt of gratitude to Lincoln Ladies’ own central defensive partnership.

Twenty-two-year-old Sophie Bradley, herself not long back from injury, rejoined Stoney in place of the stricken Ifeoma Dieke and produced three remarkably mature performances. After scoring just four goals in 103 games for England, Stoney even found herself on the scoresheet, with an unexpectedly well-taken goal against Cameroon.

That, however, was as good as it got, as a somewhat controversial 2-0 defeat to Canada ended their tournament. Their achievement, though, was altogether more important and, as Stoney recognised, the Games’ inspirational aim was felt no more keenly than in the thousands of converts to women’s football. “This tournament has captured the attention of a nation. The interest is there and it has to continue. I think attendances will increase in the Women’s Super League when it resumes,” she said.

By contrast, Kate Haywood has already found new horizons beyond sport. Despite moving to Melbourne to maximise her potential, the Grimsby-born swimmer encapsulated the frustration felt by many of her British colleagues in the Aquatics Centre. Finishing last in her 100 metre breaststroke heat, Haywood is retiring aged just twenty-five and admitted: “I am really disappointed, I thought I was going to be better than that because it had all been going so well.

“I am just looking forward to the next chapter in my life now, I have been doing this for ten years and I have achieved a lot in that time. I can definitely look back with a lot of pride.”
Sophie Allen also cut a frustrated figure in her first Olympics, missing a place in the 200 metre Individual Medley semi-final by less than half a second despite swimming three seconds slower than the time which won her the British Championship in March.

After almost failing to make the final herself, another former Lincoln Vulcan, Lizzie Simmonds, was second at the halfway point of her 200 metre backstroke final, but faded to finish fourth behind new world record holder Missy Franklin. “Fourth is the worst place to come in an Olympic final,” she bemoaned, before issuing a warning to future rivals. “Something like that really makes you hungry. It is like saying you are on the edge, just about there, but not quite there.”

Simmonds and Allen will be back in 2016, redoubling their efforts to be on the podium. Yet London 2012 was, of course, vivid proof of the thrill of merely taking part, and every Olympian should be proud of their achievements.

Even those, like rower Emily Taylor, and sprinters Rob Tobin and Richard Buck, who were reduced to the role of non-competing reserve, always ready to step into the breach at a moment’s notice and enduring the bittersweet emotions of team success.

Regardless of personal glory, it was Georgie Twigg – who has enjoyed a doubly glorious summer having graduated with a 2:1 in Law from Bristol University weeks before the Olympics – who encapsulated what everybody was feeling after a magnificent fortnight.

“It has been absolutely amazing. The crowds have been out of this world. The Olympic Village has been amazing and the buzz around Team GB has been fantastic. It is something I will remember for the rest of my life.”