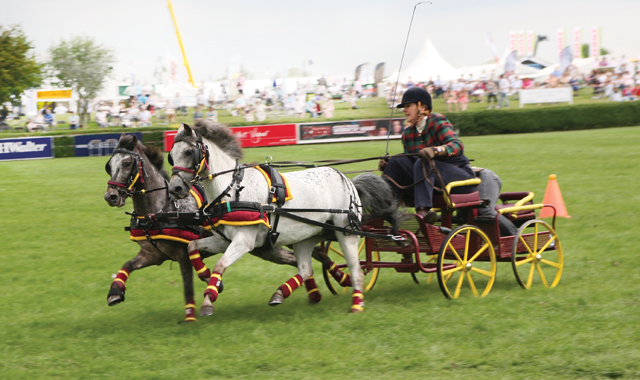 County’s big day out promises more than ever

More, more, more…. That’s the message from the organisers of this year’s Lincolnshire Show, the County’s big day out. The two-day event is overflowing with attractions for the whole family and organisers promise that it will be even bigger and better than ever.
For at this 127th Show, there are more family attractions, more delicious foods from local producers, more schools taking part in the big Challenge and more sports to try out. There are also more new attractions – like Express Eventing and the Scruffts crossbreed pooch competition.

One of the star attractions, the ‘Knights of the Damned’, are returning with a new show. Britain’s premier medieval jousting stunt team are promising more excitement and a new format for this year, according to leader Justin Pearson, who is fresh back from performing the stunts on ‘Pirates of the Caribbean IV’. The troupe also includes two local riders, Rob and James Pavey, both twenty-one and just qualifying as stuntmen. The ‘Knights of the Damned’ will be performing both days of the Show in the Isuzu Countryside Arena.

This year’s Sports Zone is doubled in size and in the run up to the 2012 Olympics, it will feature almost all the Olympic sports. Features include the ECB cricket factory – an 11 x 9m self-contained cricket batting and fielding area. Boston United will bring their inflatable penalty shoot-out and wheelchair basketball in an inflatable sports barn, 20 x 11 ft. For water based sports, Lincoln Canoe Club will have virtual racing machines linked to a computer screen for visitors to test their technique and the Royal Yachting Association will have dinghies on show. Other sports include table tennis, volleyball, badminton, hockey and a specially adapted set up for street athletics.

Joining the Show will be Olympic and Paralympic hopefuls from the county. They are all on the Lincolnshire Elite Champions programme and include Andy Skinner of Lincoln, the GB sitting volleyball player; Bernice Wilson, the 100m sprinter from Boston, who has just undertaken the European championship; and Richard Sargent, representing wheelchair basketball.

Said Marc Rhodes, events officer with Lincolnshire Sports Partnership: “We’ve got a fantastic range of sports on offer for visitors to try out, including nearly all the Olympic sports. My favourite thing about coming to the Lincolnshire Show is the sheer numbers we get taking part. Last year we had 3,400 young people taking part and around 1,000 adults. We’re hoping to beat that this year, with even more on offer.”

In the Exhibition Hall, more local schools than ever will be taking part in this year’s ‘Schools’ Challenge’, sponsored by Farmacy Plc and E Park and Sons, it aims to encourage young people to understand more about food, farming and agriculture. Phil Everett, marketing and communications coordinator with the Education Business Partnership explained: “Every previous year we have been over-subscribed so we’ve decided to move from the Discovery Zone into the Exhibition Hall, and that allows us to have thirty-three entrants this year. We’ve also got a new special schools category. It’s all booked up and with a waiting list – the schools love it.”

Primary, secondary and special schools are all taking part and one new challenge for this year is called ‘One Brand’, which encourages young people to make contact with a school in a different country, where they speak a different language and have a different climate.

Phil added: “Lincolnshire is a rural county and this Challenge gives children an excellent foundation in understanding where food comes from and how it can be sourced locally. They also go on farm visits as part of the Challenge which helps to show career options in the horticulture and agricultural industry.”

This year is a real first for dog lovers. For the first time dogs will be allowed to join in the fun at the Show. They must be kept on a lead, but owners can also leave them with a special doggy-crèche being run during the Show by local animal charity, Jerry Green Dog Rescue. And not only can people bring their dogs, there’s also a chance to compete – with the Kennel Club Scruffts Competition, sponsored by James Wellbeloved, taking place at Thursday’s Show. The four competitions taking place are ‘The Most Handsome Crossbreed Dog’, ‘The Prettiest Crossbreed Bitch’, ‘Child’s Best Friend’ and ‘Golden Oldie Crossbreed’. Entries for the heats will be taken on the day.

A major new attraction that will make it into the Clydesdale Bank Main Ring this year is the qualifying heat for ‘Express Eventing’, a mini version of eventing which promises a thrill a minute. The ‘Express Eventing Series 2011’ will see dressage, cross country and show jumping being completed in one arena. Eventing celebrity and 2008 winner Oliver Townend has already announced his intention to compete. “I am really looking forward to having the chance to compete. It is developing into a spectator and TV-friendly version of our great sport.”

Throughout the Show, the Lincs FM stage will host the best acts who make it through the qualifiers of the radio station’s ‘You’ve Got Talent’ competition. Also appearing will be two successful acts from previous years – ‘The Substitutes’ and ‘Route East’. Said Katie Trinder of Lincs FM: “We have something for everyone on the stage during the two days – from rap music to heavy rock, pop to classical.” The Lincs FM presenters will also be trying their skills as a dance troupe, with some help from local dance school Streetbeat.

And BBC Lincolnshire will be in a new home near the entrance to the Clydesdale Bank Main Ring, with on-stage entertainment throughout the two days, together with an exhibition explaining the digital switchover which is coming to Lincolnshire this summer.

The Select Lincolnshire and Tastes of Lincolnshire Food Court will feature a special Lincolnshire producer and supplier section this year, with a mouth-watering selection of local produce and some great homemade recipe demonstrations throughout each day from local food champion Rachel Green.

The Select Lincolnshire programme aims to raise awareness of the county’s food brands directly to the consumer. Its sister organisation Tastes of Lincolnshire encourages tourism destinations like bed and breakfasts and farm shops to put Lincolnshire produce on the menu.

“The Show is the home of Lincolnshire produce, which is arguably the best in Britain, and we need to be shouting about it,” said Helen Scott of Select Lincolnshire and Tastes of Lincolnshire. “The biggest draw is always the demonstration marquee and we’re very pleased to have local celebrity chef Rachel Green leading the line up once more.”

In the Greenhouse, a range of companies will be explaining how to live a more sustainable lifestyle. The organiser, Jo Huggett, director of 4Eco explained: “We have put together companies who cover a range of different techniques, and importantly they are all accredited organisations.” Technologies on display include solar power, biomass, wind turbines, ground source heat pumps and rain water harvesting.

And for the shopper, there will be more than 600 stands to visit, including the boutique style shopping on The Mews avenue featuring everything from bespoke kitchens to handmade pearl bracelets.

Alongside all the new attractions will be the features that lie at the heart of the Show’s traditional agricultural heritage, with events such as pig racing, showjumping, the spectacular Grand Parade of the best of the county’s livestock sponsored by Saul Fairholm in the Clydesdale Bank Main Ring and the vintage to modern day agricultural machinery display sponsored by Spaldings and Woldmarsh.

And from one of the county’s farms, an outstanding family tradition will be recognised when four brothers from Wrisdale’s farm in Wainfleet St Mary’s receive Long Service Awards, sponsored by Harold Woolgar Insurance for their contribution to the farming industry. For Norman, Percy, Gordon and Colin Gostelow have served a total of 174 years between them. Oldest brother Norman first started work in 1961, following in the footsteps of his father and grandfather at the farm.

Said Mark Farmer, chief executive of Lincolnshire Agricultural Society: “This is the county’s big day out and we’re really thrilled with this year’s line up. There’s something for everyone who has a love of the countryside.”

He added: “The Lincolnshire Show is an agricultural show, one of the few county shows to remain true to its agricultural heritage, a strength which has carried us forward. It’s important to stimulate awareness of countryside matters, and the vital role that agriculture plays in the local economy.”

The Show will be open from 8am to 6pm each day. Visit the Show’s website for more information and to book your tickets www.lincs-events.co.uk or call the ticket hotline 0845 2305171