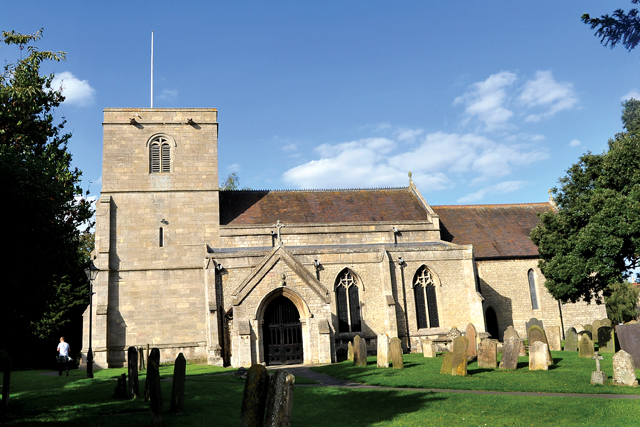 Some villages boast a special blend of features that make them the envy of other destinations – great facilities and a wealth of community spirit. Ruskington in North Kesteven definitely falls into this category and it is these factors, together with its great location that has attracted many people from young families to serving and retired Armed Forces personnel.
Shopping and essential services abound and Ruskington residents benefit from the fact that the village has few empty shops, which is not only good news but also underpins that first impression, that this is a lively village with a sense of pride.

Parish Council Chairman, Councillor Peter Cunningham MBE said: “Ruskington is the largest village in Lincolnshire, by population, and it is home to 6,000 people.The village has grown significantly by attracting incomers and that includes people who have chosen to retire here.

“The population particularly grew in the 1980s as planning approval was given for the addition of several hundred houses. These were completed about ten years ago and ranged from bungalows to five-bedroomed properties mainly located to the south of the village.”

No further housing development is planned for the village, which currently has about 2,100 homes. However, the Parish Council, in conjunction with North Kesteven District Council, has accepted that there is a need for more affordable (non-social) housing and ten properties are currently being built outside the village curtilage.

Ruskington has social housing, notably to the North and East of the village. The village is an attractive option for people who perhaps want to live ‘out of town’ but easily commute to Lincoln, Sleaford, Boston or further afield to work, or who are employed at local RAF bases.

Ruskington benefits from being on a main bus route to Lincoln and Sleaford and residents make good use of its railway station too.

For those not wishing to travel away from the village for work or other commitments, Ruskington – which is just four miles from Sleaford – has much to offer in the way of shopping, services and leisure activities.

In addition to providing a range of products and services the village’s businesses include a major employer, Tulip Ltd – which makes pork products – providing vital job opportunities.

“When it comes to leisure activities, we have more than forty groups based within the village, as well as four churches, play areas and allotments,” said Councillor Cunningham.

The groups cater for sporting interests including football, scrabble and bowls. Young people also enjoy meeting at the Ruskington Youth Club, which is located in High Street South.

Children have the use of five different play areas. Two of these are directly owned by Ruskington Parish Council, which manages all five. Families or individuals can also relax in an open area known as Horseshoe Hollow.

A well-known feature of Ruskington, the Beck – that runs through the centre of the village – also continues through Horseshoe Hollow.

Allotment gardens have become an increasingly popular pastime in recent years, thanks to the rise of the ‘grow your own’ trend, and this is certainly true in Ruskington.

“We currently have about thirty allotments, but have a waiting list of about forty people, so we are negotiating with the District Council to release land that will enable the generation of additional plots,” said Councillor Cunningham.

“We are also part of the District Council-sponsored Community Gardening Scheme, an initiative whereby a resident on the allotments waiting list can be put in touch with a resident with a large garden which they may be finding hard to manage, to the benefit of both parties,” he added.

Residents have the added benefit of having the Ruskington Garden Centre, which attracts people from much further afield, right on their doorstep.

This year the garden centre generously injected some extra Jubilee colour into the village by planting tubs (with red, white and blue flora, naturally) alongside Ruskington Beck and it will be maintaining these over the months to come.

RUSKINGTON SHOPS
Living in a large village can be a real bonus when it offers you the twin benefits of good shopping facilities and the open countryside on your doorstep. Ruskington really does tick all the boxes because it gives people an easy way to enjoy a rural lifestyle.

The village boasts a wide range of family-run and niche stores, and over the years they have proved they have the power to attract both local trade and shoppers from far and wide.

Whether you need to stock up on groceries, fruit and vegetables or newspapers, get your eyes tested or even visit the dentist, there are shops and service providers to hand. For many people that means they don’t even have to get the car out of the garage to visit them.

There are plenty of village groups and organisations too, so there are opportunities to enjoy a range of pastimes and meet new people.

Pop into One Shop in the High Street for a copy of your favourite magazine and a few everyday essentials and you are unlikely to find yourself browsing the shelves on your own for long!

Manager, Ann Short said the former Mills Newsagents became a One Stop outlet (part of a major chain) over a year ago and it’s been all go since.

“We are open from 5.30am to 10pm seven days a week, except for Christmas Day and we have got a lot busier over the past few months. We are finding that people are not bothering to travel because they can find what they want in the village,” she said.

The store, which attracts both local and passing trade, employs about twelve people, including part-timers, making it another vital provider of rural jobs.

If your faithful old fridge or washing machine finally decides to give up the ghost, and you live in a village location, you are lucky if you can pop out to the local shop and buy a replacement. Usually, it means a trip into the nearest town or city. But Ruskington residents are very well served in this respect, because Stacey Castledine is on hand and ready to help shoppers to choose a ‘new model.’

Mr Castledine is the man at the helm of SC Domestic Appliances in High Street South in Ruskington, a store he has had for fifteen years.

The shop, like many others in the village, obviously benefits from being at the centre of a vibrant community.

“We sell all sorts of white goods and also offer a repair service and we have always enjoyed a fairly steady trade,” said Mr Castledine.

On a more colourful note, anyone who loves getting creative with fabric and threads, is bound to make a beeline for The Stitchery, also in High Street South.

Edwina Coleman and her daughter, Lizzie Cherry have been running the business for the past four years.

“We mainly attract local customers, but people also pop in on their way to places such as Skegness and Mablethorpe, Sleaford and Woodhall Spa and they find us on the internet too,” said Mrs Coleman.

“The Stitchery offers patchwork workshops on Tuesdays and Thursdays with Stephanie (Steve) Jephson from Woodhall Spa.

“Liz Hands also teaches patchwork and quilting on the first Saturday and second Friday of the month. Interest is growing year by year and our workshops have a waiting list. Liz is starting a new one so we have hired the Youth Centre for sessions on the fourth Friday of the month,” added Mrs Coleman.

And, if that isn’t enough, everyone is also welcome to go along to a Knit and Natter Group, which meets on Monday afternoons from 1pm to 3pm.