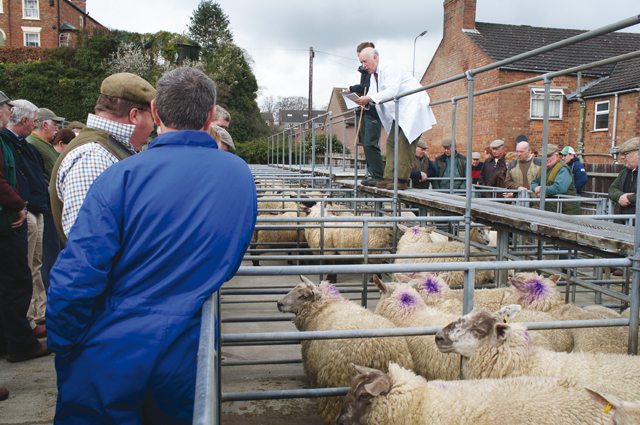 Caroline Bingham went to Louth for the first annual special spring sale of store cattle and to understand what makes Lincolnshire’s Livestock Market proud if its heritage and optimistic for the future.
Transporters and trailers were converging on Louth as I drove there myself; a sure sign if any were needed that this was livestock market day. Louth is a Charter Market and the only one in the county and this ritual of rural life and trade has been held in the town since the early 1600s. It is a public space and although the majority of the visitors on this day were breeders, producers and buyers, there were members of families on school holiday and others who had come to soak up the atmosphere and meet familiar faces.

Generations of Lincolnshire farmers have used this market and for some it is a way of life to come each week, even though they may be retired from the industry themselves.

Simon Williams, one of the partners, was my guide for the morning and we began by walking through the undercover cattle holding pens to the outside enclosures where the sale of prime spring lambs and cull ewes was about to start.

“It is one of my favourite parts of my job as a rural surveyor and valuer,” explained Simon, “to come here on a busy day like this and see how the market functions as an integral part of rural working life. There is so much dialogue between farmers and traders as well as lots of camaraderie and friendly banter.”

Auctioneer and partner in the market, Paul Robinson was already auctioneering on the raised walkway and the bidding, when it began, was fast and furious. I followed the crowd around trying to keep ahead of the auctioneer. For the uninitiated, like myself, it is hard to keep track of proceedings and there were one or two fractious buyers and a good amount of joking as the lots were quickly sold. Neither farmers nor their stock are having to travel far to get good prices at the moment; trade of spring lamb is especially brisk. For a business which earns its income from commission on sales the recent upturn in stock values is good news. Simon told me that that viability of the market and local livestock farming relies on it.

The market is used predominantly by local farmers and butchers from all over the county and especially smaller scale producers who cannot viably attend other markets out of the county or choose not to sell directly from the farm to the butchers or other farmers.

For the store cattle sale, over thirty local Lincolnshire producers and breeders had submitted 332 animals and there was a constant background buzz of activity and lowing from the cattle penning.

While we waited for the store cattle sale to begin, I wandered among the crowd. Some were taking the chance to have a coffee and a bacon sandwich and chat with friends; others were buying boots and clothing from the small shop in the market. I also called into the office of Lincolnshire Rural Support Network (LRSN) to meet the three staff on duty that day (see side panel). Rev Canon Alan J Robson, who is the Lincolnshire Agricultural Chaplain and ecumenical chaplain at Lincoln Cathedral was instrumental in founding Lincolnshire Rural Stress Network in 1999. The charity was renamed Lincolnshire Rural Support Network to reflect the broader base of their work helping farmers and the rural community through tough times.

The charity has a helpline which is open every day of the year but Alan, Alison Twiddy, the project manager and health screening nurse, Heather Dawes, visit the market every Thursday.

“Farmers are very private people,” explained Heather, “and are used to coping on their own. Sometimes it can be the last small problem which tips them over the edge and not being able to see a way forward. It could be a health issue; it could be family or financial problems. We can offer emotional and practical support tailored to each case.”

As Heather and I were talking, Alan had headed off across the car park and was soon deep in conversation with a lady, in tears, but sharing a problem.

It was now time for the main sale of the 350 store cattle and we found a place on the packed tiers surrounding the pit to see each steer, heifer and bull brought forward.

Auctioneer and partner, David Williams, with the benefit of a microphone, conducted the auction and took the bids using lightning fast reactions to spot the signals from the bidders gathered around the pit rails.

Again prices were good, to such a point that one farmer next to me was having trouble spending money he had earmarked in the hope of buying half a dozen cattle to fatten over the summer, as he kept missing out to higher bids. There were still plenty of lots to go though and I didn’t catch up with him to see if he did buy in the end.

It seems that the threat of the market site being sold for redevelopment has receded at present and the district council has commissioned the Laurence Gould Partnership, specialist farm business management consultants, to look at the medium and long-term future of the Market as well as how it fits with the future of the retail sector in Louth.

“I know that there are more ways in which the market site could be used for the benefit of the town and the rural community,” explained Simon. “There is ample car parking space and it could be developed as a farm food market, attracting visitors and locals alike.”

Alan Robson has been part of a group looking at a scheme to develop a new project attached to the market’s existing buildings. “I think that as the decline in fossil fuels accelerates there are real ecological and environmental issues to face concerning security and traceability of food and those local resources, like the market, will become more utilised and appreciated.”

His scheme put to the council would offer units, offices and meeting places for food and crafts artisans, as well as café and workshop facilities, which would attract trade throughout the week.

It had been a full day at Lincolnshire’s Livestock Market and a chance to witness a new vitality for the future. Reports pending, it will be exciting to see what the next phase of this historic market’s development will be.

WHEN TIMES ARE TOUGH
The three-person team from Lincolnshire Rural Support Network I met at Louth Livestock Market could not have been more enthusiastic or engaged with the work that they do. Their caseload has increased by over thirty percent in the last year and this reflects their policy of seeing no problem related to rural family life and business as being too big or too small to tackle.

Whether the issue is related to Single Farm Payments, health, emotional support or an immediate family crisis involving drugs or illness, this countywide service has a member of the team or access to people who can help.
Project manager, Alison Twiddy, not only undertakes casework but she is also responsible for fundraising, sponsorship and recruitment of volunteers to man the helpline.

Rev Canon Alan J Robson was part of the team who founded the charity in 1999 and finds his work is focused on mental health and emotional issues which result in anxiety, depression and at times contemplation of suicide. “Some people need more than advocacy,” he explained, “and we are here to give emotional support. People can be very reluctant to tell their story but once you dig deeper there is a real need to talk and have someone listen to problems.”

Heather Dawes, the health screening nurse, can give a body MOT to anyone calling into the LRSN office at the market. “I can identify and help with some health issues straight away like high blood pressure, stopping smoking, or wound care but I aim to guide people to their GP for further investigation. Beyond that we can help to monitor long-term problems and give ongoing health advice. People find it easier to pop in here than maybe have to make an appointment at a surgery.”

As well as seeing people on market days there are referrals through the helpline and the team and some of their volunteers also make one-to-one visits to people in their homes.

The team is completed by Sophie Dunn who is in charge of publicity and administration and a new caseworker, Lea Schofield, is covering the south of the county and making a weekly visit to Spalding Bulb Auction. The charity is supported by funds, grants and sponsorship from partner organisations such as NHS Lincolnshire, The Waynflete Charitable Trust and Lincolnshire County Council. Farming organisations such as Young Farmers groups, land agents, solicitors and local farming and rural businesses are also very generous in their donations.

The team feel that the stigma of asking for help is breaking down but as their increased caseload shows, the demand for help from the rural community is growing.

LRSN is looking to add to its team of twenty-four volunteers who help run the Helpline and take on case work. If you would like to know more about LRSN, help to raise funds or would like to offer your time and expertise, you can contact them on 07725 203560 or visit their website www.lrsn.co.uk