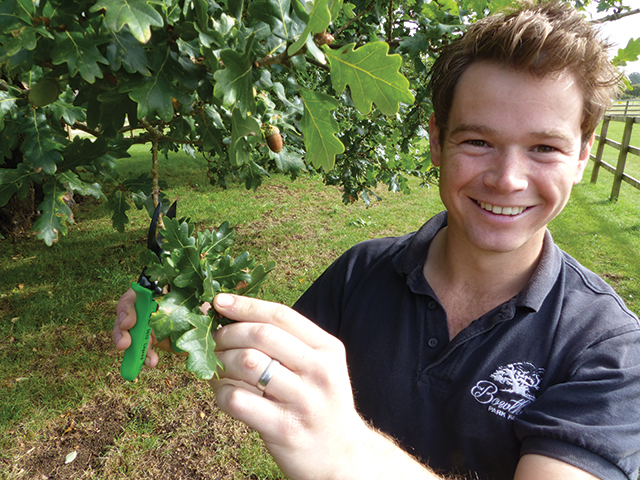 Lincolnshire is home to an abundance of flora and fauna and now thanks to a generous grant, a new countywide project is set to inspire the next generation of botanists while helping to promote wider understanding about the environment for the future, as Kate Chapman finds out.
The #LoveLincsPlants project has been awarded £499,000 from the Heritage Lottery Fund. Led by the Lincolnshire Wildlife Trust, the project is being run in partnership with Lincolnshire Naturalists’ Union, Sir Joseph Banks Society, Natural History Museum and the University of Lincoln.

Inspired by Sir Joseph Banks, the eighteenth-century Lincolnshire naturalist who famously voyaged around the world with Captain Cook, the project will preserve a historical herbarium of more than 9,000 plant specimens amassed throughout the county during the past 150 years. But it’s not just looking to the past; the project also aims to enthuse the next generation of botanists by creating a twenty-first-century collection of plants native to Lincolnshire.

Project manager Aidan Neary says these specimens will serve as a vital tool for scientific research into climate change and plant genetics, helping to address plant extinction on a local and national level.

“Lincolnshire’s landscape has changed dramatically over the years,” says Mr Neary. “We have lost lots of habitat due to changes in agriculture and building works, which has resulted in the decline of many species and the extinction of some from the county, while humans themselves have added others to the landscape. That’s one of the reasons why it’s so important to record and preserve them.

“From the historic herbarium we can see that in the 1790s Sir Joseph Banks collected a specimen matted sea lavender in Lincolnshire. This plant has not been recorded anywhere in the county since the 1950s. We’re hoping to retrace his steps to see if we can rediscover it.

“We’re really just at the beginning of our work and hope to uncover lots of exciting finds as we go along.”

The historic herbarium, which was compiled by the Lincolnshire Naturalists’ Union, contains some of the county’s rarest plants. However, with no proper storage facilities available in Lincolnshire, it was at risk of deterioration.

“The plant specimens had been wrapped in newspaper, were stored in different places, and were at serious risk of decay,” explains Mr Neary.

“They need to be recorded and mounted onto proper, acid-free herbarium sheets. When a team from the Natural History Museum came to take a look at them, they said that they were really short of records for Lincolnshire and that there was historic value in taking it on.

“The historic herbarium contains many different specimens collected by Victorian botanists including some by Sir Joseph Banks himself. We approached the Heritage Lottery Fund and were successful in obtaining funding to keep the collection in better condition and to show the value for future generations by creating a new herbarium for the twenty-first century.

“The Natural History Museum has now received the historic collection and is working to secure it safely in facilities designed for the protection of plant specimens. They are also using state-of-the-art imaging facilities to make the collection available to view online.”

He added that research has shown that amongst the younger generations there is a shortage of skills to identify and classify plant species. Through the project there will be opportunities for 18-35 year olds with an interest in botany to get involved and receive specialist training. Young people will be able to learn to identify and record plants, and help with the conservation of species and the completion of the modern collection.

The project also aims to find a new role for threatened traditional archiving skills. Volunteers will be trained in the collection, preparation and mounting of plant specimens.

Mr Neary says creating a modern day herbarium will require volunteers to visit all parts of greater Lincolnshire, under the guidance of the Lincolnshire Wildlife Trust, to collect plant specimens. Once mounted, the specimens will be retained and displayed at the Sir Joseph Banks Centre in Horncastle, as well as at the Natural History Museum and online.

“We are going to be collecting from across the county and from all habitat types – from coastal habitats such as the saltmarshes of Gibraltar Point and the heathlands around Woodhall Spa, to the chalk meadows of the Wolds and limestone hills of the south-west of the county. Absolutely everything that is native to Lincolnshire can be collected and become part of the new herbarium.”

Plants are collected under strict guidelines to ensure that there is no negative impact on the plant populations and very rare species that are specifically protected against picking by law can only be collected by individuals with the appropriate licence.

A series of public engagement events and activities is already underway and will continue until autumn 2020. This includes training schoolchildren how to collect plants, press them and make them for their own collections and hosting guest speakers who are influential in science or who have a connection with plants such as artists, sculptors and others who make items from plant materials. There will also be opportunities to gain skills in botanical illustration and photography.

The project will also be featuring in the Lincolnshire Wildlife Trust marquee in the Countryside Area at the Lincolnshire Show in June. Visitors will be able to learn more about plants and find out how they can get involved.

The project has already received help from other local institutions and businesses. Mr Neary said: “We’ve worked with NVQ woodworking students at Boston College, who have made sixty quality frames for flower presses.

“And Thorpe Bees have modified some honey warming kits for us. The presses will be put in these boxes; rather than in airing cupboards and having to regularly change the newspaper. This will speed up the drying process of the plant specimens from as long as two weeks to three or four days.”

* As part of the project Mr Neary is appealing for inspirational stories about how native plants have played a part in people’s lives. He is keen to hear from anyone whose ancestors may have had a link to Lincolnshire’s plant life – such as those involved in the making of Lincoln green dye.

If you have a story to share or would like to find out more about getting involved email info@lincstrust.co.uk