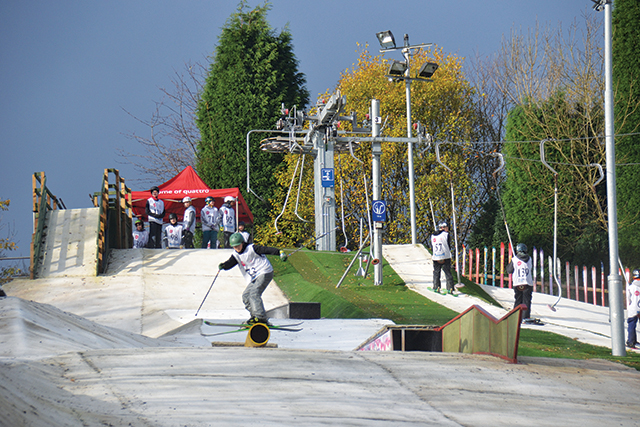 He may be watching this year’s Winter Olympics from the comfort of his own home, but 16-year-old Dan Abra explains to Kate Chapman that he has his sights set on being a future contender.
Dan has been chosen to join the Snowsport England Home Nations Park and Pipe Academy for the 2017/18 season, where he is benefitting from training and support as he seeks to progress and ultimately represent his country as a freestyle skier – a discipline which involves performing jumps, spins and tricks on the snow.

“I’m just taking things all in my stride at the moment and focussing on progressing to the next level,” says Dan, who lives in Kirkby La Thorpe, near Sleaford, “but my ultimate goal is to make the Winter Olympics team.

“I just love the adrenaline side of this sport, and I also find it really relaxing. It’s great fun – and certainly a bit different.”

Dan, a sixth former at St George’s Academy, in Sleaford, has been a keen skier since around the age of 2½, when he joined his parents Simon and Hannah and older brother Jack (19) on their regular skiing holidays.

“All my family snowboard, apart from me,” says Dan, who is currently studying for A-levels in maths, biology and PE.

“I went to ski school a few times, but mostly my family has taught me. My Dad’s in the RAF and he’s represented them in competitions before.

“It’s only more recently that I’ve got into freestyle. I really enjoyed skiing casually, but got a bit bored if just doing the normal stuff – so freestyle appealed as it involves jumps, rails, somersaults and spins.”

Dan started experimenting with a few jumps while living in Las Vegas for three years, when his Dad’s job took the family across the Atlantic.

However, it wasn’t until more recently that he developed an interest in freestyle skiing – the discipline which features aerials, moguls, cross, half-pipe and slopestyle and requires skiers to perform aerial flips and spins as well as sliding across rails and boxes on their skis.

The breathtaking mix of acrobatic jumps and tricks was only first contested as a demonstration sport at the Calgary Winter Olympics in Canada, in 1988, with events for men and women in moguls, aerial and ballet.

Four years later, the mogul event gained medal status at the Albertville games, with the aerial event following suit in Lillehammer in 1994.

“My Dad saw a post on Facebook for the Discover Your Freestyle talent programme which is run by UK Sport, seeking possible Olympic athletes,” explains Dan.

“I went through their training sessions. They had two stages and I got through both of those and was one of only five, chosen out of hundreds that entered.

“The head person from Discover Your Freestyle encouraged me to apply for the Home Nations Academy, which involved collecting some video footage and I’m now part of the Park and Pipe Academy.”

As a member of the academy Dan receives support with his training, attending a specialist centre in Loughborough every three months as well as other sessions on snow at locations around England, plus he takes part in week-long camps overseas too.

He is also supported through a separate Talented Athlete Scholarship Scheme that aims to help athletes from all different disciplines perform well in their chosen sport and academic studies.

“Unfortunately there are not many ski facilities here in Lincolnshire, we have to travel at least once a week and now go on a Friday night to a snowdome around two hours away in Castleford,” says Dan.

“It has an indoor slope, so while I’m there I mostly do rails and a few jumps, although the jumps aren’t really big enough indoors.

During the summer Dan also spent five days building his own ski jump in the family’s back garden, with help from his Dad, so he has somewhere closer to home to practice.

He’s been given a reduced membership at his local gym too, so he can work on other aspects of his training including trampoline work and muscle building, which is important to help build strength, and ultimately reduce his risk of injury.

“I’ve been involved in one competition so far – the indoor Brits – which was my first, but unfortunately it came after I had been out injured for six months, so I was a little bit rusty,” he says.

“I broke my collarbone doing a jump. I’ve also had a hip strain, and couldn’t walk for a bit and injured a joint in my shoulder – you do get a few bumps and scrapes, it’s the nature of the sport, but I’m trying to build up my fitness so that doesn’t happen.

“It’s certainly not been enough to put me off. I love sport, I play Sunday league football and have played for the county and I used to play rugby, but it’s quite physical so I gave it up.

“I’ve always loved all sports, and seem to find them quite easy to pick up but what with school and training, I really don’t have much time for anything else.

“I’ve just started sixth form and my school has been really supportive, allowing me to go on all the camps, but I also work hard to make sure I catch up with my work.”

Dan, who uses twin-tipped skis so he can move backwards and forwards, is now looking ahead to his next competition – The British Outdoor Championships – in Switzerland, in April.

“Because of my age, I’ve moved up into the men’s category now, so my aim is just to keep progressing well so I can get onto the next level and take part in more competitions,” he adds.

“It’s been great so far as I’ve been able to travel quite a lot of the world through skiing; I’ve been to France, Switzerland, Austria and the Netherlands.

“It’s an expensive sport, and I don’t have any real sponsors yet but thankfully my parents have supported me and do pay for most things; they are pretty proud of what I have achieved.

“I’ll certainly be glued to the Winter Olympics when they start in PyeongChang and ultimately, that’s where I’d like to compete.”