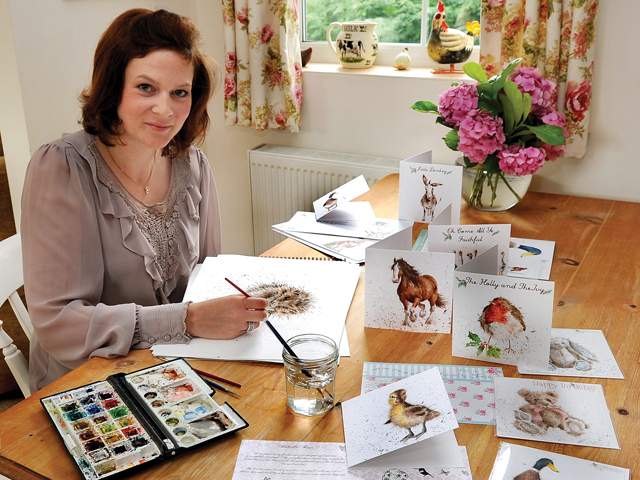 This year promises to be “full on” for talented greetings card and giftware designer Hannah Dale – who is ready to unveil an exciting range of fabulous tinware.
Hannah’s adorable bird and animal designs have already made her greeting cards a massive hit. Now they are poised to work their magic again, with her country style kitchenwear having been launched at Top Drawer in London’s Earls Court, and showcased at the Spring Fair International at the NEC
in Birmingham.

Her highly collectable pieces, finished in a delicious shade of green and illustrated with Hannah’s quirky ducks, rabbits, hens and other creatures, are the latest temptation from Wrendale Designs, based in Melton Ross in North Lincolnshire.

Hannah only started the business two years ago, but her irrepressible characters have already brought smiles to hundreds of faces and earned Wrendale Designs three prestigious Henries greeting card awards.

Hannah’s talents have also helped the company to forge a great relationship with the National Trust and designs have also been licensed to Portmeirion which has produced a best-selling range of Royal Worcester mugs. Fingers crossed the tinware will soon be flying off the shelves of shops countrywide.

Wrendale’s success has certainly been meteoric and it seems all of the Dale family – young daughters Amelia and Lara, baby Oliver and husband Jack – are playing their part.

The girls love their mum’s wonderful creations and Oliver is proving to be the perfect baby. Meanwhile, as a full-time director Jack has taken on the management of the growing company, allowing Hannah to focus on the part she likes best, the artwork.

Shops countrywide sell Wrendale’s cards (and matching stationery) and Hannah and Jack are enjoying the extra buzz of exporting them to France, Norway and Australia, where they have proved particularly popular.

“Our relationship with the National Trust has also grown. We are working on bespoke products for next year and I have been commissioned to do the designs for a National Trust book featuring fifty British animals and birds,” said Hannah.

“But it is our licensing agreement with Portmeirion that has opened the door to the tinware range. Portmeirion is enjoying great success using our designs on its Royal Worcester mugs and it is now launching a new series of eight, together with placemats, coasters, aprons and other textiles.

“However, there were no plans to launch any tinware. It has become hugely popular and we felt we could fill a gap by providing a complementary range, which includes a set of three cake tins, a biscuit barrel and tea/coffee cannister.”

Jack said: “We have gone for a quality manufacturer and added our own signature twist by decorating the insides of our tins, as well as the outsides.”

He said that Wrendale’s early success had given the business confidence to invest in its new products and also take the range to market by attending major trade shows. Wrendale’s fantastic cards led it to win prestigious Henries Awards for the Most Promising Young Designer and Best Art Range in 2012. The business repeated its success by collecting another Best Art Range prize in 2013.

Hannah, a former investment banker, grew up in Scawby (near Brigg) and went to Caistor Grammar School, before doing a degree in Zoology at Cambridge. She then worked in London before returning to Lincolnshire in 2008 to get married.

Pondering her next step, she reverted to her passion for art and began doing watercolour paintings featuring children’s names, which she sold to friends and through local stores.

A shopkeeper then urged Hannah to try her hand at designing cards. That was just the start of what is turning out to be an amazing journey.