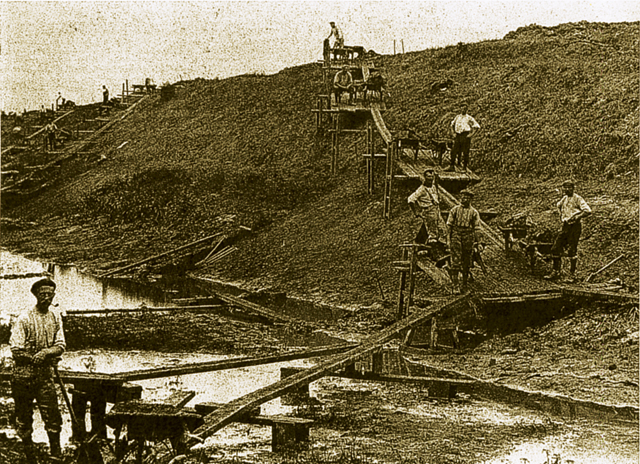 Most of Lincolnshire is only a few metres above sea level and river flooding is only prevented by drainage.
It is common in our county to see fields bordered by drainage ditches and rivers with embankments on each side to protect the surrounding farmland. Early drainage schemes, dug manually, suffered constant delays over centuries due to political and legal difficulties. Serious opposition came from small freeholders, tenant farmers and commoners who, for generations, had made a living by fishing, wildfowling, keeping geese and ducks, gathering reeds and fodder. And to make matters worse in the eyes of the opponents, many of the workers employed on these drainage schemes were foreigners.

Acts of Parliament were required to authorise the digging of ditches but engineers were faced with severe technical problems which would tax their ingenuity for many years. All drainage schemes presented difficulties, but the problems were most acute in the fens. The Romans had cut the Carr Dyke to connect the Witham to the Nene and this, like the Foss Dyke, was not only a navigable canal, but an early attempt at large scale drainage. This acted as a catchwater drain on the edge of the fens but fell into disrepair when the Romans left.

During the Middle Ages, the Commission of Sewers was established to oversee the upkeep of embankments and the clearing of watercourses. In 1531 the Commission was given a strategic planning role with real enforceable powers and, although much amended, this stayed in place into the nineteenth century. Unfortunately, no sooner had these powers been granted than one of the unifying organisations of the fens was destroyed.

With the dissolution of the monasteries after 1536, their function as custodians and agricultural improvers, of drainage among other things, also disappeared. The impact was enormous. For example, there were twelve religious houses between Lincoln and the River Slea, all with substantial land holdings. Piecemeal improvements to the Fens were carried on throughout the sixteenth and seventeenth centuries, the most important of which was the Maud Foster Drain to the north of Boston in 1568, which had a beneficial effect on the drainage of the West Fen.

The first real attempt at large scale drainage of the fens came in 1631, when pioneers began to drain the East and West Fens between the Witham and the coast. Some time later, new drains were cut in the West and Wildmore Fens with natural outfalls to the sea at Wainfleet and Friskney. However, serious land drainage did not take off until the eighteenth century as part of a wider agricultural revolution. But as soon as the various drainage schemes started to produce results a new problem emerged. As the land began to dry out it shrank and the surface of the land started to drop, making the natural flow of water along the various channels impossible. In fact, the entire fen was sinking in relation to the sea. The solution was to pump water from the lower levels to the upper drains.

There is evidence that some kind of ‘pumping engine’ operated in the Fens as early as the seventeenth century, powered by horses, but the windmill transformed drainage. By 1763 there were fifty windmills at work in Deeping Fen alone and by the end of the eighteenth century sixty-three windmills stood along the banks of the South Forty Foot Drain.

In the nineteenth century, windmills were replaced by steam engines and in the twentieth century steam was replaced by electric and diesel, but pumping is still an essential component of fenland drainage.