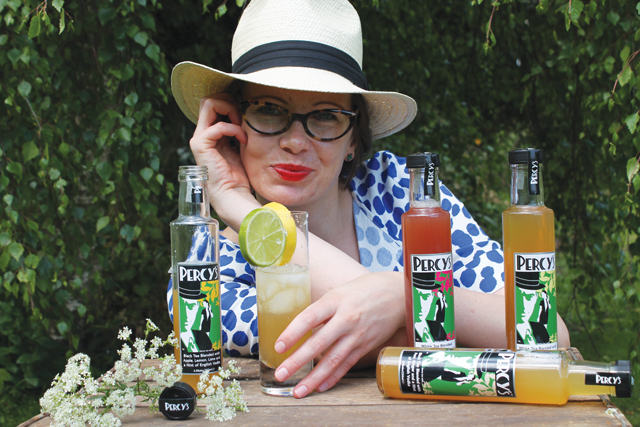 Dreaming big is one thing, but having the tenacity to see those dreams become a reality is entirely another matter, as one county drinks producer tells us.
The ‘eureka!’ moment came for Claire Hall ten years ago, when she thought up the concept of vodka flavoured iced teas. From the outset Claire (33) envisaged turning her idea into a viable business and a decade later she’s worked tirelessly to develop four very distinguished flavours as part of her Percy’s Vodka Iced Tea range – White Tea, Pear and Raspberry; White Tea, Apple and Elderflower; Black Tea, Apple, Lemon and Lime and Black Tea Pear and Ginger – all sold through her website and via online retailer Not On The High Street.

Named after her father whose middle name is Percy and her great-grandfather too, Clare says the 4.5 per cent proof drinks, are packed with unique character rather than artificial colours and flavourings.

And each blend of ‘Percynalitea’ is made right here in Lincolnshire at the University of Lincoln’s National Centre of Food Manufacturing, single-handedly by Claire.

“It all started in 2005, I’d just finished university and took a job with a PR company, where I was working on reception,” she recalls.

“Part of my role was to order in the teas and coffees and I started getting lots of fruit teas, when people were really just starting to drink them.

“I was sat there with one one day, when I just thought this would be good with vodka in as an alternative to beers and ciders, which can be too sweet and fizzy – as something different. It all stemmed from there.

“From that moment I always imagined them selling in shops and perhaps making me rich – ten years on, I’m not rich at all, and although they’re not in shops they’re selling online.”

After coming up with her idea, Claire wasted no time testing it out and that night concocted her first version using a Twinings tea bag and some vodka.

“To be honest, it was disgusting,” she laughs.

“It was the worst thing I had ever had. I knew it shouldn’t taste like that, so I tried it with Lipton’s instead, which is more commercial, but it was still too sweet.

“There was an American chap where I worked at the time, who knew how to make iced tea properly; he explained how to brew it and add lots of fresh fruits and that was it really.

“It seemed so simple – tea, fresh fruit, vodka – and it is when you make it at home for one; but trying to turn it into a business was so hard.”

Still undeterred Claire worked on perfecting larger batches and took samples to central London, where they were well received. Spurred on by the feedback, she did more research into the drinks market, recipes and attended exhibitions as well as trying to outsource production.

“I had no money, was working in London at the time and had to borrow some money from family,” says Claire, who returned to Kirton Holme, near Boston, in 2010.

“I went out and tried to take the drink to a few bars and, although they were interested, they wanted to know more about my marketing plan and how people would know about it.

“I knew nothing about the drinks business but it all made me start thinking that I needed to produce it myself, rather than outsource it.”

It wasn’t long after moving back home that Claire found the Holbeach food manufacturing centre, although it wouldn’t get the specific machinery she needed to upscale production for another three years.

“By this time I realised it had been a long eight years and I’d always had the same flavours – Lemon and Lime and Mango,” she explains.

“Times had changed. I had changed since I started Percy’s; it had started to stand for something a bit more British, so I had to change flavours, which took about six months.

“If I had to describe them, I would say they are different; they are not sweet or fizzy – that syrupy taste is not there, and that’s really why I came up with them.

“Percy’s isn’t like other drinks – it’s refreshing. There are no added sugars – the apples and pears are sweeteners.

“It is expensive; but there are no colourings or flavourings – if I did use these it would be cheaper and easier.

“At the moment the iced teas are handmade in small batches of 500–1,000. No batch will taste and look the same due to the variety of fresh fruit used. From Pink Ladies to Braeburns, I never know what kind I will be using.”

By day Claire continues to work for interiors specialist Philip Cowan Interiors, while dedicating every other spare minute to Percy’s, which she eventually hopes to make her full-time job.

As well as taking her drinks to various shows and events, she also managed to pull off a great coup before Christmas, getting her products stocked on Not On The High Street – where they sold out within eight days.

When it comes to drinking Percy’s, Claire recommends straight up with some ice, although Prosecco or soda water could be added to provide some fizz – but be warned: these will dilute the tea.

Her current plan is to secure more investment and spread the word about Percy’s, which has just launched afternoon tea parties, as well as linking with mobile bar venture, Bar on a Bike. This summer Claire is also teaming up with Lincolnshire chef Rachel Green to devise some recipes to accompany her drinks and create some more using them.

She has also thrown her hat into the ring to try and win some funding from the ultimate entrepreneur, Richard Branson, who this year is offering up to £1m through his 2015 Pitch to Rich scheme, to help start-up businesses grow.

“So far I’ve invested about £35,000 of my own spare money, borrowings and grants,” adds Claire.

“The business means I have learnt to say no to lots of social invites, as I just can’t afford them.

“Seeing friends costs nothing and I am lucky I have a lot, and they know my situation, but I haven’t had a holiday for two years – not even a week off at home.

“I am surrounded by work at the moment – it has been tough getting to this point, but it’s a really exciting time and I’m in such a great place with it.”