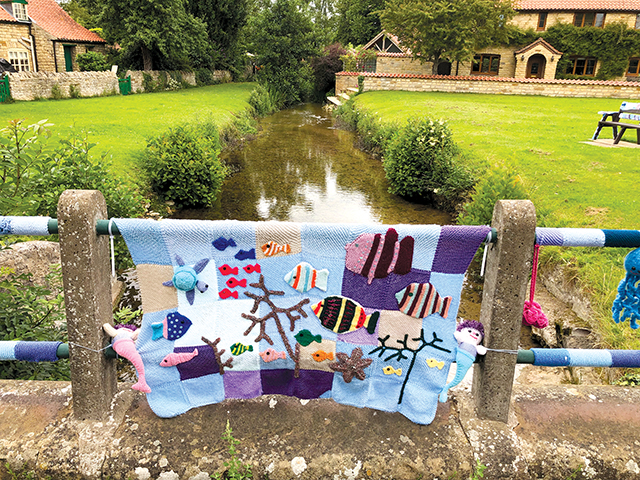 The bright and cheerful Dunston Yarn Bomb has been a real joy bringer to the many people involved in making the displays as well as those who see them, although the message behind the initiative is an important one: to highlight the scourge of domestic abuse and coercion, which has been even more of an issue during successive lockdowns in the country.

Pauline Moore, spokesperson for the groups involved explained: “Dunston’s Knit & Natter group (who are part of a UK wide knitting group, Knit for Peace) were contacted by VivaVittoria.it to see if they would contribute knitted squares that would be made into blankets and cover the squares in Milan – to raise awareness of domestic abuse (DA) in Italy.

“Beth McLuckie, our organiser, made squares and our Methodist Minister, Gabrielle suggested they might do something locally to raise awareness of DA. Partly inspired by the many knitted creations decorating post boxes popping up all over the place, Beth came up with the idea of a ‘Yarn Bomb’ and it grew from there!”

Primarily the Dunston Yarn Bomb has been led through Dunston Churches Together, with the knit and natter group, the local sewing group ‘Dunston Sewing Bee‘ and soon others in the church community and people living in the local vicinity joined in too.

School children at Dunston St Peter’s Church of England Primary School have taken part by making butterflies, pom-poms and God’s eyes which they have used to decorate the school fence. Since the yarn bomb was put on display at the beginning of July some houses in the village have joined in too.

As well as the school children, there has been a core group of around 20 people who have contributed, knitting, sewing and crocheting over the last few months. Many of them say that they got a real sense of community and belonging and it gave them a constructive purpose during lockdown.

EDAN Lincs (End Domestic Abuse Now) have provided literature for some of the displays and in turn the Yarn Bomb is raising funds for EDAN, with a Strawberry Tea held in July and a Family Games afternoon, which will be held on Sunday 15th August in the grounds of the Village Hall.