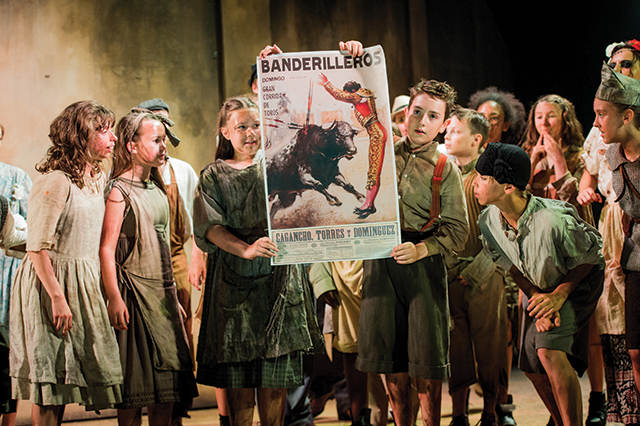 The Ross name has a powerful legacy in North East Lincolnshire and especially in Grimbsy, where Carl Ross built the commercial fishing and trading business which became the Ross Group. In this century his grandson, David P J Ross, is shaping opportunities for the community through the David Ross Education Trust.

David Ross has attracted many headlines as the county’s first billionaire. Trained as a chartered accountant, his business career so far has included building a personal fortune as finance director of the Carphone Warehouse through to investments in commercial property, directorship in sports clubs, stadia and events, publishing as well as many voluntary board roles.

David was born in Cleethorpes and explained that until he left university, Lincolnshire was very much home. “My parents had a house in Abbey Park Road, Grimsby,” he explained, “then later we moved to Saltfleet. After my parents’ divorce my father bought a house in Ferriby Lane, Scartho so I am very proud to say I come from the county and especially from Grimsby.”

His name is now closely tied to education in the county through his philanthropic and charitable activities; the David Ross Foundation and the David Ross Education Trust (DRET).

In 2015 the Foundation sponsored the new purpose-built vault in Lincoln Castle to house the Lincoln Cathedral copy of the 1215 Magna Carta.

David said: “I was pleased to be approached to fund the David P J Ross Magna Carta Vault as part of the renovation of Lincoln Castle. The architecture of the vault and indeed the whole project is outstanding. The ambition to widen the access to and knowledge of the Magna Carta as well as the wider history of law making and justice fitted well with the remit of the foundation, to broaden education horizons for young people.”

Through his business career David has built many contacts and friendships within the political establishment and this is where the impetus to establish the DRET began.

“I am a friend of the Labour peer, Lord Adonis, who was Minister of State for Education in the Blair and Brown governments. Andrew was one of the architects and instigators of the Academies Programme.

“While Andrew was still an advisor in the policy unit he asked me to visit a school in Grimsby, the Havelock Academy, which was not performing as it should. I thought that I could help to make sure a more effective outcome could be achieved for the local community.”

The Foundation established the DRET in 2007, which to date has thirty-five schools incorporating a mix of primary, secondary and grammar and special schools. The Trust has a geographical focus in Lincolnshire and Northamptonshire, as well as parts of Yorkshire and Leicestershire. This mapping reflects areas where David has family connections or spends his time.

“Havelock Academy is based in the east marsh of Grimsby and my family has many historic ties with this community,” said David.

“My grandfather and father worked alongside fishermen and dock workers from this area. I felt that if the school and future generations needed help then a member of the Ross family should be the person to help make it happen. We got the school rebuilt, appointed a new headmaster and established a new set of values for the teaching body and the pupils. To date the turnaround in the GCSE results at Havelock Academy has been one of my proudest achievements.”

The DRET is a charity which has responsibility for the facilities, management, governance and curriculum of schools under its care for 125 years. Within Lincolnshire, there are twelve schools at present but David acknowledges that there is still the possibility of more being enlisted. The mission statement is ‘Broadening Horizons’ for pupils.

“I have seen situations where pupils were not engaged in their own education and to see this turned around is very satisfying. Academies can still be stronger and we eagerly wait for the improvements in the GCSE results each year but this is far from the finished picture.”

What happens on the sports field, within a school music programme or any other of the extra-curricular activities which are offered is important to the DRET. David explained how in the previous week he had been to see pupils from Malcolm Arnold School, Northamptonshire sing with the choir from his old alma mater, Uppingham School and that of St Matthew’s Church, Peterborough.

“The school previously had no choir and to now be performing with two nationally renowned choirs is hugely inspiring.”

David’s country home, Nevill Holt Hall, in Leicestershire, sits close to the five county boundary cluster where several of the DRET academies are based. Here, he has built an opera house within a stable block which each year hosts the Nevill Holt Opera (NHO) festival. There is the chance for some pupils to be involved in the NHO Education and Community programme as front of house staff or help with set design and construction; others sing in the chorus onstage.

Making sure each child is prepared for their next educational step or the workplace is in sharp focus for the DRET.

“We aim to work with local companies and employers to prepare children for the industries and opportunities in their district. It is also about giving experiences that really will broaden their ambitions and build confidence. We want each school to be a reflection of the best that their teachers, pupils and the community can be,” explained David.

“There will always be ongoing challenges such as recruitment of teachers in some of the smaller, rural or coastal communities and accommodating the demand for places as the schools have been turned around but in terms of trying to give something back, establishing the trust has given me the opportunity to try to shape the future of large numbers of children.”

Just before Christmas, the former Labour politician, the Rt Hon, the Lord Blunkett was appointed chairman of the DRET. David has accepted the role of chairman of the New Schools Network, a government body which is responsible for the Free Schools Programme in the UK.

David said: “David Blunkett is the ideal person to continue the positive contribution which the DRET is making in Lincolnshire and the other counties in which the Trust operates. There are many more projects in the pipeline which will continue the drive to make our schools stronger and more valuable to their local communities.”

NEVILL HOLT OPERA
2016 will be the fourth season of this summer opera festival. The Nevill Holt estate is in Leicestershire, close to Market Harborough. Its magnificent gardens and Stable Block Theatre make an impressive setting for the critically acclaimed shows which have been enjoyed there since 2013.

This year a brand new production of Giuseppe Verdi’s masterpiece Rigoletto will be performed on the evenings of 16th, 18th, 21st and 23rd June. British baritone Mark Stone will be making his debut in the role of Rigoletto.

This will be followed by two evening and one matinee performance of Donizetti’s popular opera, The Elixir of Love on 30th, July 2nd and 3rd June.

Guests can access the estate grounds from 5.50pm (3.30pm matinee) to enjoy pre-bookable dining and hospitality or picnics. Guests are also welcome to bring their own picnics.