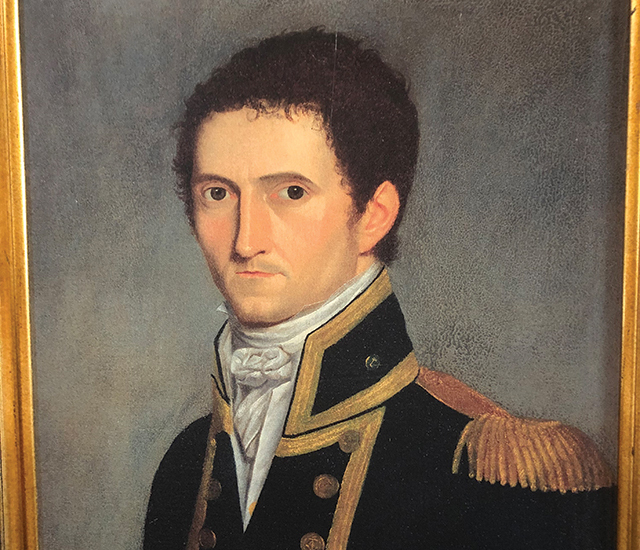 Two hundred years after his death Donington’s most famous son, Royal Navy explorer Captain Matthew Flinders, is set to make his final voyage – back to his birthplace following a campaign led by his descendants and community members. Kate Chapman tells his story
Captain Flinders (1774 -1814), who joined the navy when he was 15, made several significant voyages during his career, but is best known for being the first person to navigate the entire coastline of Australia and declare it a continent. He is also credited with naming the country.

Following his death in 1814, Captain Flinders was laid to rest in St James’s Burial Ground, London. After the expansion of Euston Station westwards into part of the cemetery in the 1840s, his headstone was removed, and it was thought his remains had been lost.

However, in January 2019, HS2 archaeologists working at Euston on the site where the new HS2 station will be built, uncovered the explorer’s grave. This prompted Donington residents to join forces with parish and district councillors, church representatives and members of the Lincolnshire branch of the Britain-Australia Society to fulfil the wishes of Captain Flinders’ descendants to return his remains to the village.

The Matthew Flinders Bring Him Home Group was delighted to hear its efforts had paid off when it was recently announced the explorer’s remains can be reinterred in the parish church of St Mary and the Holy Rood.

Group member Alan James, who also looks after the exhibition commemorating the explorer’s life located in the church, said the news is wonderful for the village.

He added: “Support has been shown in Donington for Matthew Flinders’ links since the 1950s, but things really picked up in the 1970s when it came to marking the 200th anniversary of his birth. Since then an annual memorial has been held in Donington church.

“Ruby Hunt, our district councillor at the time, was very much at the forefront of this. Sadly, she died a few days before the statue of Captain Flinders, which stands in the Market Place, was unveiled back in 2006.

“As a village we never really thought his grave would be located – those working at Euston were very lucky, especially coming across it so quickly.

“But once the news was out, an article in our Doningtonian newsletter had the headline ‘Bring Him Home’ and that inspired the name of our community group.

“It’s taken a lot of meetings, effort and patience but it’s wonderful that Captain Flinders’ remains are to be returned to the village, where his father, his grandfather and siblings are also laid to rest.”

The name Matthew Flinders is synonymous with exploration, science and discovery – he made several significant voyages, most notably as commander of HMS Investigator, which he navigated around Australia’s coastline.

This feat made him the first person to sail around the country in its entirety, which enabled him to confirm it as a continent. He’s also credited with giving the country its name, although he was not the first to use the term, his work and publications popularised it.

As a result, the surname Flinders is associated with many places in Australia including Flinders Ranges, in south Australia, the town of Flinders, in Victoria, and other memorials, buildings and a university.

Captain Flinders, accompanied by his cat Trim, set sail from England in July 1801, a few months after marrying Ann Chappelle, a descendant of a Norman Baronet. It was to be nine years before the couple were reunited.

Along the way he was shipwrecked and detained on a tropical island when he was forced to call in at ile de France (Mauritius) for repairs, unaware that France and Britain were at war.

Following his arrival back home in June 1810, Captain Flinders wrote a massive narrative – A Voyage to Terra Australis – while in very poor health.

In 1812 his wife gave birth to a daughter, Anne, who would sadly never remember her father. Captain Flinders’ health continued to decline, and he died on 19th July 1814 – the day after the publication of his books and maps.

He was buried in the St James burial ground near to where Euston Station would be built and following its expansion in 1849 his headstone was removed. For a long time there was an urban myth that he was buried under platform 15.

HS2 archaeologists were able to identify the explorer’s burial site among 40,000 other human remains due to a lead breastplate placed on top of his coffin.

Following the discovery Helen Wass, HS2’s head of heritage, said: “The discovery of Captain Matthew Flinders’ remains is an incredible opportunity for us to learn more about the life and remarkable achievements of this British navigator, hydrographer and scientist.

“Captain Matthew Flinders put Australia on the map due to his tenacity and expertise as a navigator and explorer.

“Given the number of human remains at St James’s, we weren’t confident that we were going to find him.

“We were very lucky that Captain Flinders had a breastplate made of lead meaning it would not have corroded. We’ll now be able to study his skeleton to see whether life at sea left its mark and what more we can learn about him.

“This discovery is particularly exciting for me as an archaeologist working on the site as Captain Matthew Flinders was the grandfather of renowned Sir William Matthew Flinders Petrie, commonly known as the ‘Father of Archaeology’.”

HS2 chief executive, Mark Thurston, has now written to Captain Flinders’ family to say his remains can be reinterred in the church where he was baptised.

A specialist team from HS2 will transfer his remains to the Diocese of Lincoln for safekeeping and it has been confirmed that the reinterment will take place at the church of St Mary and the Holy Rood, Donington on Friday July 17th followed by a memorial service in Lincoln Cathedral on Saturday July 18th.

“It is fitting that the last voyage of Captain Matthew Flinders will be back to the village of Donington where he grew up and we are pleased to be playing our part in his last journey,” added Helen.

“This local boy from Donington put Australia on the map due to his tenacity and expertise as a navigator and explorer.

“The Flinders name is synonymous with exploration, science and discovery, and HS2, through its archaeology programme, will ensure that we maximise the opportunities for further academic and scientific study.”