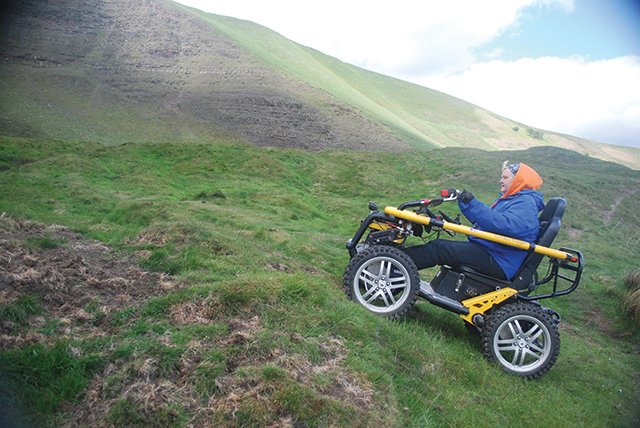 Determined not to give up her passion for walking and the great outdoors despite illness confining her to a wheelchair, Debbie North has launched a campaign to help make the inaccessible accessible and encourage others in a similar position to get out and about.
Through accessthedales, she and husband Andy have been raising awareness about alternative routes and equipment that can help disability sufferers to still enjoy countryside walks. By completing walks and sponsored events themselves they have also raised money to buy a number of all-terrain wheelchairs, which can be hired out on a daily basis in the Yorkshire Dales.

Debbie, a former headteacher from Yorkshire who has lived in Lincolnshire for the past nine years, has always been a keen walker, spending many weekends away in her beloved Yorkshire Dales and completing other long-distance routes.

She was diagnosed with chronic degeneration of the spine in 2011 and found herself confined to a wheelchair. The pain and medication she was prescribed made it extremely hard for her to continue her job and she took ill health retirement.

“When the day came that I found myself in a wheelchair I was devastated that I would never walk again or complete long-distance walks, or climb to the summit of a mountain,” recalls Debbie (54), of Scamblesby, near Louth.

“I’d always been very physically fit and active – I grew up in Yorkshire and most school holidays we would be out doing a Coast to Coast, or walking the Cumbria Way, Dales Way and Three Peaks. Now I had lost my career and my absolute passion.

“I went into a kind of depression for a short while, wondering what was going to happen to me, until my stubborn genes kicked in and I decided that I would do something about it.

“I began to investigate all-terrain wheelchairs and read that they had some in the Lake District and the Forest of Bowland that people could hire out; there was nothing like that in my beloved Yorkshire Dales, however. That’s when I started my campaign to get a Tramper there.”

Debbie set up acessthedales and by 2014 had raised the £7,000 needed to buy a Tramper for the National Trust’s Malham Tarn, in the Yorkshire Dales, which is available to hire for £5 a day.

Shortly after, thanks to a TV news bulletin, she discovered a small family run business based just a few minutes down the road in Manby, where they make TerrainHoppers – another type of electrically powered all-terrain buggy.

“We didn’t delay in arranging a test-drive,” says Debbie. “We went onto the beach at Cleethorpes and I was driving the Hopper up and down the sand dunes and found myself at angles that caused Andy to gasp in horror!

“By the time I had driven over the dunes, into the sea and through dry sand, quite a crowd of people had gathered round to watch me whizzing around. People were asking if they could have a go! It’s an amazing machine.”

In April 2015 Debbie and Andy completed Wainwright’s Coast to Coast walk, planning their own route using bridleways and tracks from St Bees to Robin Hood’s Bay, while TerrainHopper sponsored the adventure by lending Debbie a vehicle for the two-week journey. The couple’s route is detailed in their first book, In The Spirit of Wainwright, published by Sigma Press this summer, while their latest bespoke long-distance adventure – the Coast to Coast to Coast taking them eighty-one miles from Semer Water, in Wensleydale, to Bassenthwaite Lake, in Cumbria – will be chronicled in a second volume next year.

“Through my passion for the great outdoors I aim to raise awareness of the difficulties faced by wheelchair users who are trying to access the countryside,” says Debbie. “There are places to walk, but a lot of times it’s just a mile or a mile-and-a-half, which isn’t worth getting the wheelchair out of the car for. Sometimes a walk around a town is classed as getting out into open – but that to me isn’t the countryside. I need to have that feeling of absolutely getting away from it all, the exhilarating solitude of the hills.

“I want to be able to put it on my website and write blogs to say that there are these places to go; get people to look up the TerrainHopper and help make provisions for people with disabilities to get out there,” adds Debbie.

To highlight her campaign further, Debbie has joined a number of access forums and is working with the Lincolnshire Walking Festival, where this year people will be able to try out the TerrainHopper.

She has also teamed up with television presenter Julia Bradbury, who has launched The Outdoor Guide (TOG), highlighting great outdoor places to go and walks to enjoy, for which Debbie is her wheelchair walk designer.

As well as undertaking more public speaking engagements to highlight access issues, Debbie is also planning to complete the West Highland Way, climb Snowdon and will be exhibiting the TerrainHopper at the Countryfile Show this summer.

“Working with Julia is another exciting project and she’s very kindly also written the foreword for our book,” adds Debbie. “There are different kinds of all-terrain wheelchairs available on the market, but they come at a price. Having the right type of buggy is only part of the problem for us wheelies to get out into remote areas of the hills and dales. I aim to highlight these challenges and make it possible for those of us who wish to get out into the hills.

“As well as changing my life, by giving me back my passion, it has also done the same for Andy. As my carer he would not go out walking by himself – as it’s something we have always done as a team. Now we have that back again and want to show other families and parents what is out there to achieve.”

Fundraising donations can be made via www.justgiving.com/accessthedales4