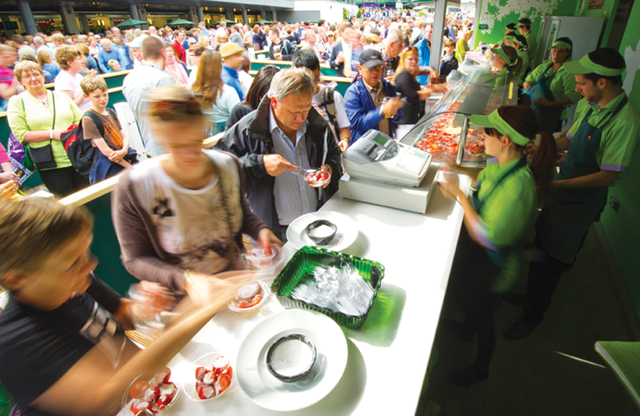 Ensuring winning service for The Championships

A temporary job as a waitress led to an unexpected change of career for Lincolnshire-born Georgina Rhodes, who now plays a key role behind
the scenes of the world’s most famous tennis tournament.
With this year’s Wimbledon Championships about to get underway (29th June–12th July), it’s already been full steam ahead for several months for Georgina, the events and operations support manager at The All England Lawn Tennis Club, in London.

As well as co-ordinating all the function rooms and delivery of events within the catering team at the club, the 35-year-old mum-of-two also helps organise sponsors and corporate clients and runs the Facilities Management Catering (FMC) control office during The Championships themselves.

“My job is a very varied one – I am never twiddling my thumbs,” smiles Georgina, who grew up in Pinchbeck.

“When I tell people I work at Wimbledon, I often get asked what I do for the other fifty weeks of the year, but our whole planning operation starts in September.

“This year will be my sixteenth Championships and during that time we’ve seen Andy Murray’s win in 2013 and then the Millennium building – a new area for members and competitors – was opened in 2000. In 2009 the roof came on Centre Court and we’re currently working up to 2019, when Number 1 Court will have a roof as well.

“There’s a twenty-year plan and I’ve been very much a part of that. And even though I’ve been here so long, I never tire of it. There’s a great buzz and always something new happening.”

“Music was always my passion – I played the piano and violin and expected my career to involve it too.

“Not long after starting my course I needed a job, so I answered an advert looking for waitresses for contract caterers Town and County, who provided staff for different sporting events,” she recalls.

“I started as a waitress at The All England Club at weekends and when they needed extra cover and I also did a few events at other venues such as Twickenham and in the early days some royal jobs including Buckingham Palace Garden Parties, and at Clarence House for the Queen Mother’s funeral.”

In 1999 FMC took over the catering contract. Georgina continued working for it as a waitress and also in the HR office doing some admin work, where she primarily helped with the recruitment of 2,000 extra staff needed during Wimbledon – a task in itself which takes up to ten months. After her graduation the following year she was offered a permanent role as a recruitment assistant.

“All this time I was studying music because of what I’d done at school. I was an orchestral player and the natural progression would be try out for an orchestra which, if I got a place, would involve lots of travelling. I’d also met my future husband at university, so I wasn’t so keen to do that.

“Coming up to graduation I was offered a full-time job – there aren’t many graduates who walk out of university with such a great offer waiting for them, so that’s basically how it all started.

“As well as Wimbledon there are lots of other things going on here – there’s private members club, other tournaments in the summer, plus we do functions, charities and black tie events.”

Georgina became recruitment manager at the site in 2004, and then took a year off in 2007 when she became a mum to twins, before returning a year later on a part-time basis. In 2008 she moved over to the event operations side of the business and five years ago returned full-time taking up her current position as events and operations support manager.

“My role is varied – helping co-ordinate other functions and Wimbledon itself. Once The Championships start I support the operations director and it involves a bit of everything from training for staff to talking to sponsors.”

And with ninety-two catering units ranging from off-site hospitality villages to kiosks staffed by around 1,800 workers there is never a dull moment. During the two-week event around 300,000 cups of tea and coffee, 28,000kg of English strawberries and 150,000 glasses of Pimm’s and 30,000 portions of fish and chips are among the items served to 10,000 players, 350,000 public visitors and 20,000 members of the press.

“From the end of May I’m working every weekend until July and during the event I start work at 6am. If there’s no late play I usually finish around 9pm, but if the roof is closed and play continues I can be here until 11pm,” says Georgina.

“I do have a television in my office so I do get to watch some of the games during quiet periods – but that isn’t very often! During the two weeks my office turns into the control office for the caterers – all correspondence goes through me.

“It’s hectic but I really enjoy it, just seeing the people; especially the returning staff – there’s a lot who come back, some of them have been doing it for twenty-five years. We get students, who come for a three-year cycle, then we get their brother or sister too – it’s like a big family.

“As for playing tennis myself, what with the hours I work and family life there isn’t really time, I don’t even get to play my music anymore. The club is my world and I sometimes wonder whether it really is that big, are people that interested?

“But then you see them camping out waiting and the atmosphere is amazing. It’s a very special place.”

*To find out more about this year’s Wimbledon Championships visit www.wimbledon.com