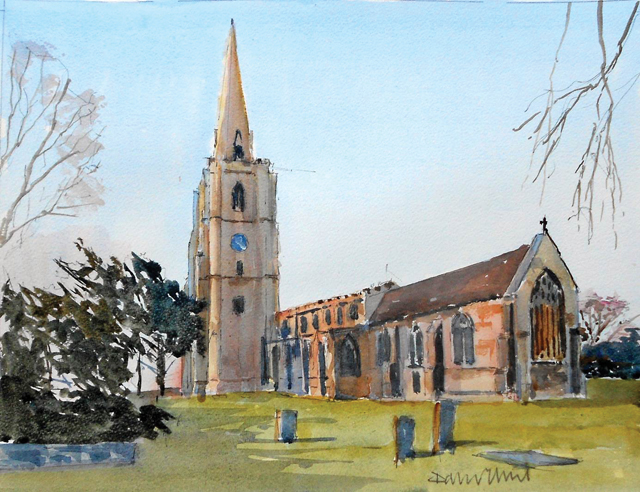 The South Lincolnshire village, near Spalding, is a large community with a big link to one of the country’s most famous sons.
Captain Matthew Flinders, the first person to identify Australia as a continent, was a former pupil at the village’s Thomas Cowley School back in the 1800s and his name is much used in the community.

On 16th March 2006, a statue of him was unveiled in the Market Place. There is now a park, village magazine and community youth group named after him and memorials to Flinders and his family can be found in Donington Parish Church, where his baptism is recorded.

While the village is rightly proud of its famous son, it is heavily focused on the young of today and they are at the heart of its community spirit.

Retired teacher Margaret Wright, who used to teach at the Thomas Cowley School, plays a huge part in making the village a better place for the youngsters to live.

She has been a steering influence on the community youth group, called Flinders Founders, which was responsible for the village having Flinders Teen Park.

Flinders Founders is a group of 11-to-19-year-old volunteers who set themselves up in 2006 to make Donington a better place for young people.

“The village was a really grim place in those days. The group has flourished and continues to attract new members, while the older members have stayed on beyond the age of nineteen,” said Margaret.

“They transformed a piece of derelict wasteland into the Flinders Teen Park, which is a skate park for teenagers – with a BMX track around the outside – but also a lovely park with gardens and fencing, bird boxes and a wildlife garden.

Last year £40,000 in funding was obtained to put in new ramps, making it an even more attractive skate park.

“They hold graffiti workshops every two to three years, where a graffiti artist comes in and the youngsters graffiti the ramps properly,” said Margaret.

The youngsters themselves look after the park, carrying out litter picks every so often, raising money for projects at the park and doing the maintenance and gardening work.

“The park opened in 2008 and it took two years to get the funding, get the land and do everything,” said Margaret.

“It was basic to begin with but it is lovely now, well kept and there is a bridge over the ditch to get into the park.

“It has had an enormous impact on the village. Those teenagers used to hang around the Market Place, but they are not there now because they go to the Teen Park.”

Flinders Founders also plays a big part in building up community spirit in the village, by organising a number of social and fundraising events throughout the year. These are always well supported. The Halloween party proved popular, with around 150 to 160 people attending.

“The Christmas party is coming up for families and young children, complete with a Santa’s grotto,” said Margaret. “At Easter the group organises an Easter egg treasure hunt and in the summer there is a party in the park which is a huge success.

“The park is a place for teenagers. It is an unsupervised site but it is a unique facility and they are a unique group.”

Margaret is secretary of the group but all the other officials are young people from the village.

Since the group started in 2006 it has received more than £190,000 in funding and Margaret thinks that is all down to the hard work done by the youngsters.

“I am sure we are successful in getting that money because the young people are doing the work themselves for the village youth,” she said.

As well as the Flinders Founders youth group, there is also a youth club in the village which is open on Mondays for the older children and Friday for the younger children.

A few years ago, the youth club received some funding which enabled it to buy some good quality musical equipment for youngsters who wanted to form a band.

“That band, called Gypsy Heart, now does gigs in London and all are doing music at university,” said Margaret. “Unfortunately the equipment isn’t being used now, so we are desperate for youngsters to join the club and start using it. One of the band members has even offered to come in and help to put another band together.”

The village’s senior school was built in 1719 by Thomas Cowley who was a local landowner. Its main claim to fame is that Matthew Flinders was a student at the school. However, that is not the only fact from the past that makes it stand out.

Its school football team was one of the first ever to play in the FA Cup. Back in the 1871–72 season, they were drawn in the first round of the competition against the prominent Scottish team Queen’s Park and, as neither team could agree a date, both progressed to the second round.

School publicity co-ordinator, Eleanor Livesey said: “The school has about 640 pupils, which is the largest it has been in its history.

“We are so oversubscribed, it is a case of finding more classroom space. We have built a new maths classroom which was recently opened by the new head of governors.

“We have also converted the old school cottage into a purpose-built learning support area to teach life skills.”

The school is just preparing for a busy Christmas term with a concert, talent show and Christmas bake-off competition, which is to be judged by Lincs FM presenter Rob Hammond.

Donington is a thriving village with every amenity a community needs, including a butcher’s, baker and a couple of village stores. It also has an active and highly successful Donington in Bloom group.

A voluntary group, whose aim is to improve and maintain the environment in and around Donington for the residents and visitors, the group plants beds, containers and hanging baskets around the village to improve its appearance, making it an attractive place to live and visit. It competes in the East Midlands in Bloom competition and won a Gold award in 2010, 2011 and 2012.

Donington in Bloom was also the lead group to arrange the Big Beacon Party for the Queen’s Jubilee event in the village. Community allotments and a herb garden are another achievement for the group.

Chair, Liz Walker said: “We are an all-round community group.”