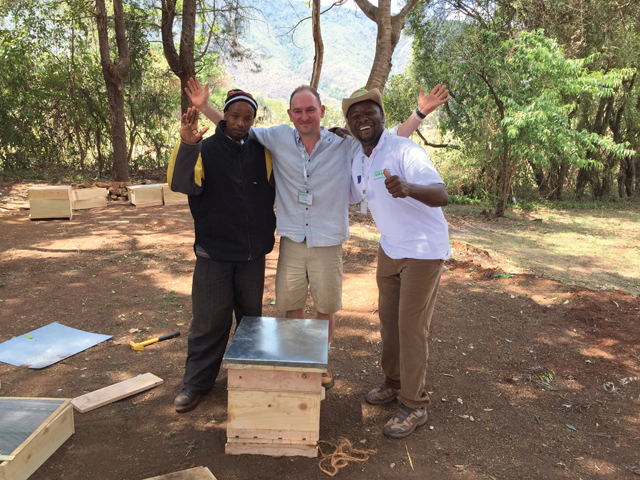 Swapping the flat fenlands for the plains of Africa to help its farmers unleash their potential has proved a life-changing experience for one Lincolnshire grower.
Farmer and journalist Matthew Naylor has visited the continent several times with the charity Farm Africa, but last autumn decided to get involved in one of its projects, helping farmers in Tanzania to build new beehives.

As part of a team he worked long hours alongside his African counterparts to build, wax and deliver as many new hives as possible in three days. The team’s ambition was to raise £50,000 along the way.

Poverty is the main driver of deforestation in Africa – when you have no source of income except the forest you live in, people understandably cut down trees. Farm Africa’s project in Nou Forest is working with 200,000 people to show the local community how they can build businesses from sustainable forest products like honey and mushrooms, without resorting to cutting down the trees.

Matthew, who grows potatoes and cut flowers at his family farm in Moulton Seas End, near Spalding, has been working with the charity since 2009, when he developed a deep love for the continent and its people.

He explained: “I’ve visited Africa several times. When you visit on business or for a safari, you see the country as others might wish you to see it. Travelling with Farm Africa gives a much greater understanding of what life is like in rural areas for subsistence farmers.

“To go out in a Land Cruiser, down bumpy road for five hours on a dirt track you get to meet people with a very different experience of life.

“My last visit with Farm Africa was to Uganda in 2012 to look at some vegetable growing and youth projects. Having seen the success of these, I decided that I wanted to do something to raise funds and to tell UK farmers about our counterparts in eastern Africa.

“It strikes me that farmers are the same all over the world – some are entrepreneurs, some are set in their ways and dislike change – but all of them have a pride in their land, knowledge and heritage which UK farmers could identify with.

“We decided that we wanted to support the beekeeping project which addresses several important issues: deforestation, increasing food production, and empowering women.”

During his eight-day trip, Matthew and the team spent three days building new hives, which they delivered to Endijo village.

“A traditional beehive is just a hollowed out log suspended high in a tree, out of the reach of honey badgers. The problem is that the women cannot climb trees or lift them up there,” said Matthew.

“The Langstroth hive which we were building, with a separate chamber for the Queen bee, are much more productive.

“To start with, we worked in pairs with some of the villagers who were to receive the hives with the aim that they could teach others how to do it afterwards. Working closely with these African farmers was perhaps the most rewarding aspect. Most of our conversation was done through translators, as the majority of the African farmers spoke Swahili but just through doing a job together, we got a real sense of their lives and their challenges.

“The second day we decided to set up a production line and we produced nearly three times more. Unfortunately we didn’t have the same conversation or interaction. We learnt that building the whole hive in a pair, while slower, gave you the pride and satisfaction of completing the whole task, rather than just sections. Our ‘Westernised business model’ didn’t actually make that much sense in that environment.

“Our biggest challenge was that the local tools were quite crude by comparison with those that we would use at home. I came home realising that the farmers over there are already doing better than I would had I been born in their position.”

Farm Africa is an expert charity that works directly with farmers in eastern Africa helping them to use modern farming techniques which result in larger harvests, more food to feed their families, and an excess to sell for the best possible price, thus providing a source of income for their families.

“Farm Africa is a great charity for UK farmers to support because it is helping to build food security in countries which can’t afford to buy food from developed countries. The charity focuses its spending on education and encouraging collaboration. The principle is very much about helping farmers to earn their way to a better future,” said Matthew, who is currently organising several fundraising events to help reach the team’s £50,000 target.

“When delivering the hives we turned up not knowing quite what to expect. We drove into the village and around 100 people came out singing, performing special songs they’d written for us. The sensation of joy and excitement that they expressed was genuinely overwhelming.

“We were dressed in Masai robes and joined in with their dancing. This sort of thing really isn’t an everyday experience for a farmer from Spalding.

“We were addressed by a government official. He thanked Farm Africa for helping but stressed that the country really needed the ability to trade overseas and the opportunity to stand on its own two feet.”

While life in Africa is much simpler, Matthew says it has refocused his idea of what life is really all about.

“Many live in houses with just one room, cook on a fire, some would have a standpipe with mains water, while others would have to walk to fetch fresh water,” he said.

“The houses are made of mud, with a metal roof, no glass windows. Without all the complicated trappings of Western society, African village life is focused much more on family, friendship and the natural environment.

“Some of the people that we met would never have had the use of a mirror or a camera. We took a photograph of a lady in her early sixties, which is old by the local standard. She looked stunned when we showed her the image and then burst into laughter.

“For me this demonstrated how, in the Western world, our personalities and our identity are complicated by the effects of image.

“The whole group agreed that this was a life-changing trip and I would urge anyone with an interest to get involved in Farm Africa’s excellent work.”

For more information about Farm Africa visit www.farmafrica.org Anyone who would like to sponsor one of the group’s fundraising events in 2015 can contact Matthew at mail@matthewnaylor.com