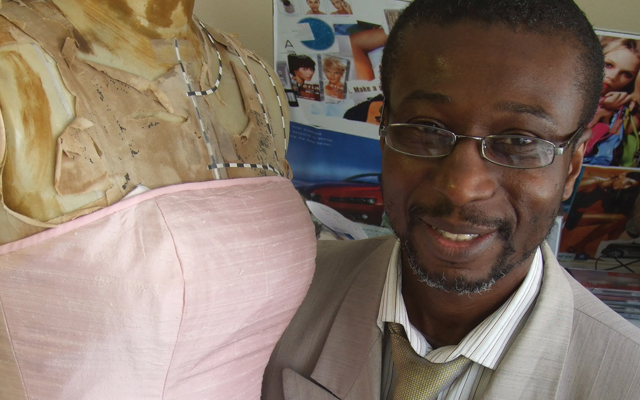 Caroline Bingham went to Louth to meet an international couturier who has ambitions to re-establish manufacturing in the town.
George Adesegun’s route to Louth has been via his birthplace, London, and his upbringing with his grandparents in Lagos, Nigeria. “I grew up in Africa, mindful that clothes are to be appreciated and valued. We did not have the luxury of new clothes so my imagination was captured by the garments I saw in catalogues and magazines belonging to a neighbour,” he said.

It was George’s fashion illustration and designs, with their mix of African and western influences, that won him a scholarship to Gloucestershire College of Art and Technology and later the acclaimed Epsom College. George also studied shoe design at the prestigious Cordwainers College in the 1990s.

After an international career that took him to New York, Canada, Amsterdam and France, his personal and work life changed when he and his wife started having their children and he did not want to leave his family behind. So he stayed in England and later started the ready wear collection in London. George and his wife decided to relocate their household and their four young children to Louth. “We wanted to bring up our children up in an environment where they can walk home safely and the community does not have the distractions of a large city,” said George.

George has opened premises on Aswell Street, Louth where he works with his locally recruited production manager, Wilky, who could not believe her luck in finding a role for her own considerable fashion manufacturing skills and experience in her home town.

George’s vision is to champion the quality of British manufacturing and create a hub for fashion skills in Louth. His collections of made-to-measure and couture bridal, occasion and daywear utilise classic design skills which are in danger of being lost.

“I was classically trained in atelier skills: illustration, designs, corsetry, embellishment, embroidery, pattern cutting, stitching and finishing. These are the skills that I want to pass on because I believe in durable and timeless style,” explained George.

“The trend for disposable fashion is not sustainable and I believe manufacturing can be resurrected on a local scale.”

The impression may be that couture is only accessible to the very rich, but George wants to get a message across that his designs can start from £300.

“Many girls are spending that amount of money on a prom dress but I can create a unique garment that will not just be tailor-made to fit perfectly, but will be versatile and timeless in their wardrobe.

“I can work to any budget because cost is largely driven by the choice of fabric and the embellishments that are chosen.”

Many of George’s designs feature corsetry. “I love the female form and corsetry gives a structure that is incredibly flattering and makes anyone wearing the garment feel very special. This is one of the best parts of my work; to make my clients feel beautiful,” he said.

Creativity is at the heart of George’s work and he also writes poetry, inspired by his African upbringing, and utilises his drawing skills to illustrate these verses.

His couture and design work is not yet well known in Africa but he is now thinking of going back after many years and recently his collections were shown at Africa Fashion Week, which was shown to national and international press and buyers held at Spitalfields, London.

He added: “It was a fantastic opportunity to be part of this catwalk show. Fashion is a growing industry in Africa and my work is already well accepted by the international press which is now all over Google, social media sites, African television, on Sky and even shown on BBC China. However, I am a passionate champion of British manufacturing and I am on a mission to see this become a reality in Louth!”

George also offers corset making evening classes for dresses starting in September 2012 for 6 weeks, 6pm– 9pm, and a two-day weekend corset making class. Space is limited, so please call or email to book your place on the course.