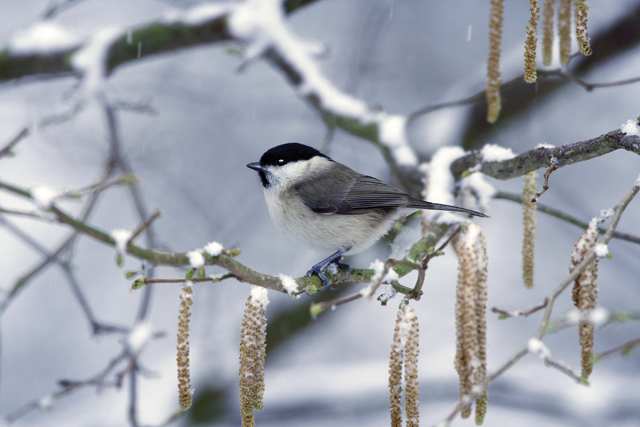 When Nicholas Watts decided that Vine House Farm at Deeping St Peter, near Spalding, should be a place where steps could be taken to try to halt the decline in numbers of wild birds, it was a decision that was to benefit the wildlife of a much wider area than just this part of Lincolnshire.
Over the past thirteen years Vine House Farm has built up a countrywide customer base for its extensive range of products, most of which are grown on the farm.

“It all really came about by accident,” Nicholas said. “I had started recording the birds that were seen on the farm back in 1982 and by 1992 I realised by how much the numbers were dropping.

“I wondered what we could do about it, and started by putting food out. The birds came in great numbers – it was quite a spectacle, with up to as many as 800 at any one time.

“So we decided to hold an open day at the farm during which several people asked if I could sell them bird food.

“When we held a second open day the following year the same thing happened – so we had a market for bird food without even trying.

“The first crop of sunflowers was planted in 1998. This variety produces the black seeds, more oil-rich than the striped seed. Our sunflower range is highly successful, simply because this is a food loved by more species than any other that we know of.

“We have added more seed varieties each year, and bought land especially on which to grow them.”

The remaining acreage of the farm grows the more traditional crops – cereals such as wheat and barley, oilseed rape and potatoes.

Those grown for the bird food mixture include naked oats, a variety with less husk than those which appear on the breakfast table as porridge oats, red millet and white millet. Another cereal grown produces a small oblong seed of an appropriate size for small beaks. It is marketed as canary seed but also much enjoyed by house sparrows and other birds of the garden, so is included in several of the seed mixes.

Among bird species which have been becoming rare in recent years is the tree sparrow. At Vine House Farm, however, it has the attraction of the red millet to encourage it to make its home there.

Nicolas says that his aim at the farm is the same, although on a larger scale, as that of his customers in their own gardens large or small: to attract as much wildlife as possible.

“Over the years I have worked hard to ensure that we not only maintain our existing wildlife habitats that help to create diversity, but that we create new habitats as well.

“In reality the principles are the same, whether it is a small garden or a farm like ours, with water and a rich variety of native plants bringing numbers of insects which, in turn, will enhance bird and animal life.

“We have succeeded in doing this at Vine House Farm by digging a series of ponds in four different areas. Around these I have put in native plants, and also planted a native hedge, containing species such as hawthorn, blackthorn, guilder rose, dog rose and hazel.

“Where possible we have planted two hedges, side by side, about ten yards apart, thus creating a fantastic wildlife corridor.

“I have also found that cultivating a strip of land and allowing our native broad-leaved weeds to grow enhances the plant diversity. This is the key to increased insect populations, and production of native seeds.

“We have also put up nest boxes and created feeding stations for the birds.”

It is to these nesting stations that the tree sparrows are attracted, to the home-grown red millet. The nest boxes have also been a great success, with many having three broods of tree sparrows reared. These welcome birds have also nested in the surrounding hedges and in two local redundant farm buildings.

While the tree sparrows are the obvious successes, other species have also been seen to be thriving, including the barn owl – nine pairs have successfully reared their young here.

This combination of conserving and enhancing natural resources and adding to them with food and nesting places is a valuable one. Many problems have been caused for wildlife by so much loss of habitat in recent years and the reduction in the abundance of the beetles, worms, aphids and larvae which they need for feeding their young, as well as themselves.

In the Vine House Farm brochure there are foods listed that cater for a range of species. A new product launched last year was a Robin and Friends Mixture containing feed easily eaten by the soft-billed species, such as the redbreast himself and others such as the blackbird.

Ground feeders such as the dunnocks and song thrushes are provided for by products such as sunflower hearts, smaller than the whole seed; these are also included in the Finch Mix, ninety per cent of which is grown on the farm.

Feeding is not only important in winter but also during the breeding season, when birds need high levels of energy to keep their youngsters supplied with food. Fat balls are a valuable source of this; here the good practical step of selling them without the usual net coverings has been taken.

This is important for the birds’ welfare, for there have been many instances of severe injuries through their feet or legs becoming caught up in the netting. Purpose-made fat ball holders are available and much safer.

Vine House Farm Bird Foods remains a family concern, with Nicholas having been joined by his middle daughter, Lucy, and his son-in-law, Robert Golland, who is married to his eldest daughter.

A team of three staff deal with the mixing of seeds and dispatch of orders; four in the office are involved in the bird food aspects of the farm; another six work on the farm itself.

Among the very few products not grown there is the niger seed, that favourite of goldfinches, which needs a warmer climate. Anything else brought in is sourced as locally as possible. This contributes to the overall objective of achieving as low a carbon footprint as possible.

As all the preparation of the mixture is carried out on the farm and dispatch is direct to the customers, bird food miles are kept to the minimum. Customers reduce their own mileage by not having to travel to the shops.

There is also door-to-door service for other wildlife in their gardens, as goods in the product list include such items as bat boxes, butterfly feeders and hedgehog houses.

The first open days at the farm raised money for Lincolnshire Wildlife Trust; the trust continues to benefit from its activities, as do the trusts local to each customer. From each order, five per cent of the purchase price is donated to the geographically appropriate trust.

In less than three years, more than £25,000 has been raised for conservation work across the UK.

Those first ideas of Nicholas Watts have proved to be the seed corn of a harvest of successful conservation schemes.