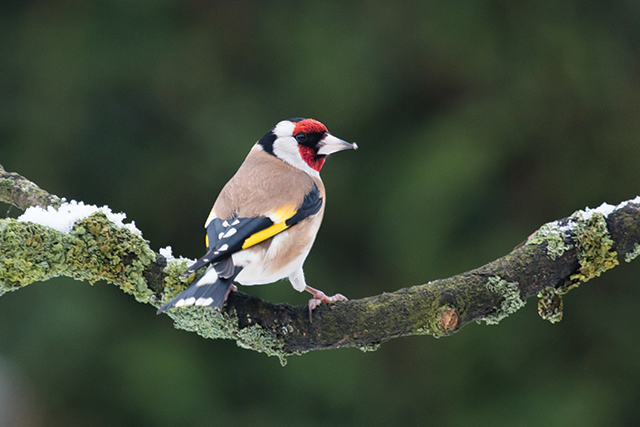 Many of us enjoy feeding our garden birds seed during the harsh winter months but choosing a good quality wild bird mix is essential. An unclean bird mix can be dangerous to their health.
It may be cheaper but can also contain dust and debris, which can damage the bird’s respiratory system. It will be worth asking your supplier for evidence of their process, to ensure their products have been screened effectively.

BIG GARDEN BIRDWATCH
With 56% of UK species in decline and 165 species considered Critically Endangered in Great Britain you may wish to take part in the 2017 RSPB Big Garden Birdwatch from 28th to 30th January. Birdwatch is the world’s largest wildlife survey which monitors the birds which visit our gardens. Last year more than half a million people took part, counting more than eight million birds. You can request an information pack from the RSPB website with details of how to take part. www.rspb.org.uk

Before the end of January the RSPB has some tips to get your garden ready.

Install bird feeders and nestboxes to make your garden a more attractive environment for the birds. Having a feeding station or wildlife cameras is a fantastic way to have a closer view of wildlife colour and their fascinating behaviours. Finally, open a bird café by putting out food to entice birds into your garden.

BEARDED TITS AT HIGHEST NUMBERS ON THE HUMBER
Bearded tits are beautiful, cinnamon brown birds. A recent report on Rare Breeding Birds in the UK report shows that in 2014 there were more than 750 pairs breeding in the UK, the highest numbers since scientists started monitoring. Approximately a third of these are found on the Humber.

And numbers have gone up in the last two years as well. It is hoped that the work to improve and create more reedbed homes for them will allow bearded tit numbers to continue to grow.

These record numbers are made even more remarkable by the population crash that occurred in 2010. Bearded tits are very sensitive to cold hard winters and this can have a knock-on effect on their breeding success – and after a disastrously cold December five years ago the population dropped by nearly half to only 360 pairs in the UK.

The loss of reedbed habitat over the years has also contributed to previous declines, as the birds have only been doing well in a few isolated areas for a few years. But recently, they have been spreading as they settle in new reedbeds and the 772 pairs recorded in 2014 are the highest numbers recorded since annual monitoring began in 1995.

Pete Short, RSPB Humber Reserve sites manager, said: “Bearded tits are a rare bird, which makes it all the more important that they are doing well. Over the last few years there has been a lot of hard work put in to create new habitat for them on the Humber, which has allowed the population to boom.”

Named after the dark facial markings on the males that resemble a moustache, bearded tits make their homes on well-managed reedbeds. The historic loss of this wetland habitat across the UK has resulted in the population becoming fragmented across isolated areas in the south west, eastern and northern parts of England.

WOODHALL’S B&B WILDLIFE STARS TAKE TO THE SCREEN IN WORLD FIRST
The abundant wildlife surrounding Kirkstead Old Mill Cottage B&B, just two miles outside Woodhall Spa, have no idea how closely they are being watched, and that’s just how owner Barbara Hodgkinson likes it.
Barbara has cameras trained on bird feeding stations and nestboxes all around the fully modernised mid-nineteenth-century cottage and on the beck flowing into the River Witham, where kingfishers dart and dive. Every single room in the cottage – including communal rooms – has a choice of twelve live camera feeds screening what’s going on outside.

“It means that guests can look at all the birds feeding when relaxing in their rooms or while they have breakfast, while the wildlife they’re watching remains completely unaware and undisturbed,” says Barbara.

“The cameras became fully operational just last year. As far as we know, we are the only B&B in the world to offer this. Apart from the kingfishers we get sightings of egrets, owls, woodpeckers, mistle thrushes, sparrowhawks, herons, buzzards, magpies, swallows and many other species – I’ve spotted fourteen different species so far this year just on the feeding stations. Only this morning I’ve been watching a single mum great tit feeding her chicks – and a great spotted woodpecker is back!”

Surrounded by fields, bounded by the river and just over a mile from the B1192, Kirkstead Old Mill Cottage is a haven of peace and tranquillity for guests and wildlife alike, with deer, stoats, mink, weasels and squirrels among the visitors.

“We’re only just outside Woodhall and all its attractions but because we are in such a rural setting our nature-loving guests get the best of both worlds,” said Barbara.

There’s even a live webcam feed on the B&B’s website (www.woodhallspa.com) so that past and future guests can keep an eye on Woodhall’s wildlife action.

For more details or to book a stay, call Barbara on 01526 353637 or email barbara@woodhallspa.com