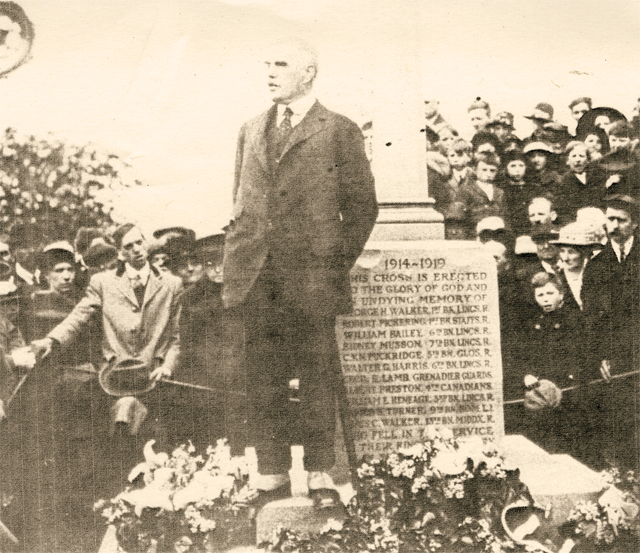 Field Marshal Sir William Robertson, born in Welbourn in 1860, was the first and thus far the only soldier in the British Army to rise from the lowest rank to the highest.
The son of Ann and Thomas Robertson, village tailor and postmaster, ‘Wully’ was educated at the local village school. While still at school he was picked out by the rector, Canon F A Leslie Melville, as a boy who showed promise.

This philanthropic rector gave him extra tuition and encouraged him to stay on at school beyond the normal leaving age. When he did eventually leave school, aged thirteen, he first worked in the rector’s household and continued to receive very welcome tuition, before moving on, to another domestic position at the Deene Park home of the Earl of Cardigan in Northamptonshire.

He clearly did not enjoy this work very much. The only quote I could find from him about this period was many years later when he is said to have remarked to a fellow officer, “Boy, I was a damned bad footman.” To escape this life, William took the bold, or some would say reckless, step of joining the army. In November 1877, five months under the minimum age for joining the armed services, he signed up for the 16th Lancers.

William’s mother was horrified. In a letter to her son shortly after he enlisted she wrote, “You know you are the great hope of the family. If you do not like service you can do something else, there are plenty of things a steady young man can do when they can read and write as you can. I shall name it to no one for I am ashamed to think of it. I would rather bury you than see you in a red coat.” In the same letter she described the army as “a refuge for all idle people”. This was a view of the army that was widely shared in the country at large at that time.

Due to the low pay and terrible conditions the army tended to attract men from only the lowest sections of society. In his memoirs William described his fellow soldiers as “rough, hard drinking and hard swearing”. On his first night, William was so appalled by the behaviour in the barrack room that he considered deserting, only to find that another soldier had stolen his civilian clothes and beat him to it. But William did stick it out, excelled at running, worked and studied hard and ten years later he was made an NCO.

He saw service in India, South Africa, the Intelligence Corps, the Staff College and the War Office, where he was appointed Director of Military Training. Robertson progressed steadily through the ranks, to Second Lieutenant, Captain, Lieutenant Colonel, Colonel, Major General and Chief of the Imperial General Staff, receiving promotion to Lieutenant General in 1915. He was made a baronet in 1919 and appointed Field Marshal in 1920.

This Lincolnshire lad, William Robertson, played a significant role in the First World War. Although he had an uncomfortable relationship with many of the leading politicians of the era and disagreements with fellow officers, he continued to express his opinions forcibly. Robertson believed that the war could only be won on the Western Front. Whilst he may have made mistakes, his views on strategy and tactics were ultimately vindicated. He commanded British forces on the Rhine from 1919 to 1920 and died in 1933.