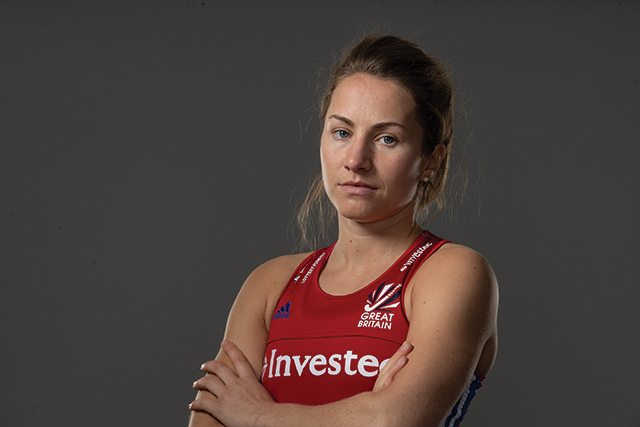 The 27-year-old made her debut for the national senior squad in 2013 and is no stranger to the Olympic stage, having been part of the gold medal winning team at the last Rio 2016 Games.

Now, with her training in full flow, midfielder Shona must wait until June to find out if she has secured a place on the team for the Games, which are due to run from 24th July to 9th August.

“For most athletes, especially hockey [players], to compete at the Olympic Games really is a career pinnacle,” she explains. “Everyone grows up watching the Games, they’re the biggest sporting event in the world.

“To go to Rio was amazing and then for us to win gold, well you can see from all the pictures and videos how much it meant to us all, it was wonderful.

“So, first and foremost, it’s now all about putting myself – and the team – in the best possible position to go to Tokyo later this year.

“I want to be in that group of 16 going; there’s a training squad of 25, so we don’t find out the final list of who’s in the team until June.”

THE EARLY YEARS
Shona, who was born in Grantham and lived in Dry Doddington (located between her birthplace and Newark), was quite young when her parents encouraged her to try her hand at a variety of different sports.

“I first started playing hockey in Newark when I was about six or seven years old,” she recalls.

“As a youngster, growing up I was always pretty active. I think my parents were always looking at different ways I could expend some of my energy and I did all kinds of things, not just hockey; there was swimming, tennis and football too. I enjoyed all of it.

“I seemed to pick the hockey up fairly quickly and I was relatively good at it. I think that’s because I was playing multiple sports and I was developing skills that I was able to transfer.”

When she was around 13 years old, Shona moved teams and began playing for Beeston, in Nottinghamshire.

“They were a much bigger team and were playing national league, which is one level below the premier league, and I learnt a lot there which really helped me to improve my game,” adds the former Kesteven and Grantham Girls’ School pupil.

“I was playing for Notts County and also for the Midlands region and still doing lots of other things as well.

“I was doing particularly well at football too, playing for Lincoln City, but then around the age of 14, I had to make a decision between hockey and football.”

Shona decided to pursue hockey because the pathway to progress was more structured, while football, she felt, lacked a middle step.

“I wasn’t that focussed on actually getting to the top of the sport,” she adds, “I was just more focussed on getting as far as I could. I tried out for England at 14 and didn’t get in, but then a year later I did.”

Shona went on to play for England Under-16s, Under-18s and Under-21s, before making her debut for the seniors in 2013. Since then she’s represented her country in the EuroHockey Championships and World League Final and won gold at the 2015 Euros, as well as that historic win in Rio.

The team beat defending champions the Netherlands in a dramatic penalty shoot-out to secure their first Olympic gold medal and it was an extra special night for Shona who made her 50th international performance during that match.

“Hockey is a full-time job, we train twice on Monday, Tuesday, Thursday and Friday while Wednesday is a recovery day,” she explains. “We’re also doing something on a Saturday too, whether that’s a club match, or extra training. It really is a lifestyle, not just a Monday to Friday, 9-5 job.

“It’s time-consuming, especially when I was growing up. I would have to miss out on social events, parties and holidays. You have to be disciplined.

“You end up spending a lot of time away from home. That’s why I ended up relocating nearer to London, as training is every day and I can’t commute.

“And to a big extent we’re governed by the sport – if there’s an international fixture, you can’t change the date. If it falls on the day of a friend’s wedding, there’s nothing you can do about it.

“My family and friends have always been very supportive in a good way, they’ve never pushed me to do anything, they’re just there to keep me going. They’ve all been good to me.”

NATIONAL LOTTERY FUNDING
Funding from the National Lottery enables Shona and other athletes like her to dedicate their time to training and competition.

It funds more than 1,100 elite athletes on UK Sport’s World Class Programme, allowing them to train full-time, have access to the world’s best coaches and benefit from pioneering technology, science and medical support.

And since National Lottery funding started in 1997, Great Britain and Northern Ireland athletes have won 864 inspirational Olympic and Paralympic medals.

When it comes to managing expectations as the reigning Olympic gold medallists, Shona says the team tries not to give it too much thought.

“We’re currently in full training, and have recently returned from Australia and New Zealand, where we were pretty successful and played some nice matches.

“Those who follow the sport all the time know the past four years have been full of ups and downs for the GB women’s development.

“We’ve had a couple of different coaches and a couple of retirements – but whatever happens the team will go out to Japan to do its best.”

Shona, who is sponsored by STX and St Helen’s Farm, keeps herself busy off the pitch as well as on. She enjoys visiting schools with the Mintridge Foundation, has been a volunteer with Independent Age UK and, as well as coaching, she also undertakes public speaking.