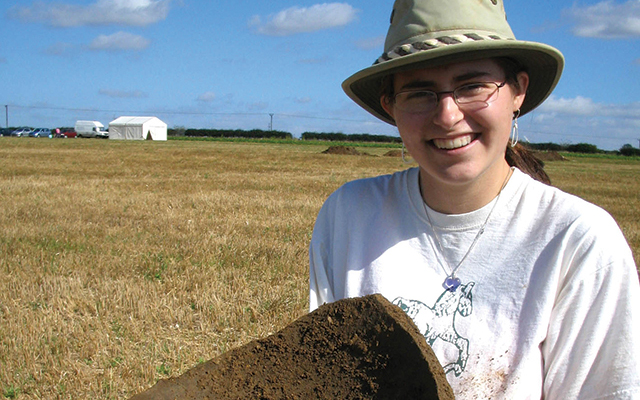 Amateur archaeologist, Sue Beasley, was part of a team who investigated the village’s Roman past.
The plough soil in many fields is about 30-40cm deep and although some fields have been in arable use for centuries, history lies hidden beneath and in the case of Wrawby, hidden; but not safe. The non-invasive method of searching out new settlement sites is fieldwalking. It simply means walking across a field and picking up what you find on the surface. Pieces are churned to the top by ploughing and when the share bites ever deeper, new bits are exposed. Annual walking of a site can reveal a tantalising glimpse of what may have been there. At Wrawby fieldwalking clearly showed that once a Roman settlement had been there. Apart from cups and mortaria (as in mortar and pestle), bowls and pieces of large storage/cooking jars hundreds of pieces of roof tile came up. As some of the pieces were freshly broken it was also clear the site was being slowly eroded out. Eventually, when fieldwalking alone could expand on our knowledge no further a Heritage Lottery grant was secured to investigate further.

Wrawby is not alone in the landscape and for a long time was coupled with Brigg, being known as Wrawby-cum-Brigg. In turn, Brigg is situated at a significant point in the Ancholme valley through which the River Ancholme is navigable from the Humber to Bishopbridge. The current stone bridge in Brigg is less than one hundred metres from a Bronze Age crossing point of the river. Brigg developed after 1086 (it does not appear in the Domesday Book) when it became little more than a market place where ships unloaded against the wharves along the river’s edge. To understand what made this point in the valley so useful you have to look at the geography of the entire Ancholme. For the most part it is flat and wide, being no more than two metres above sea level. Before South Ferriby sluice held back the tide, the sea, at its highest, is said to have reached no further than Brigg. Apart from being flat, the Ancholme is wide – except for Brigg where a spur of land acts as a pincer forcing the river Ancholme through a narrower gap where people could cross without having to wade through a mile of marsh first. Although this is obviously significant for east to west traffic, finds of Roman artefacts in Brigg itself are negligible suggesting that in the Roman period (43AD to 410AD) the area was quite wet and too wet for even the Romans to establish more than a bridge. Our site at Wrawby sits on top of the spur of land on the south facing slope roughly a mile from the current crossing point. If the Bronze-Age people (about 2100BC to 750BC) found a way across, you would think others would too. Evidence of the Iron-Age, following the Bronze Age at 750BC to the Roman invasion in 43AD, is not found in Brigg but it is at Wrawby.

The first step of the investigation at Wrawby was to have a magnetometer survey done on our site. This is one of those ‘Time Team’ moments where someone marches up and down over the field holding a ‘machine’ that looks at what is underneath with the magic of magnetism. Initially the results were disappointing as a Roman villa was expected to leap out from the printed page. It did not but what it did show was the possible road heading towards the river crossing as well as a plethora of circles that indicated an Iron Age settlement with continuation into the Roman period.

This site is fairly close to a spring known as St Helen’s Well. Obviously one of the requirements of all settlements is access to a water supply so there is no surprise there. The church in Wrawby, also reasonably close to both the spring and our site, is St Mary’s. Local legend says that when Constantine (the first) was declared emperor of Rome in, he was in York with his mother, Helen. He rushed off back to Italy while his pious mother travelled more sedately and one of the places she rested, was at Wrawby where she blessed the spring which ever after had healing properties. The cult of St Helen is well known and details can be found in the book by Dr Graham Jones, ‘Saints in the Landscape’. The first thing that you notice that is unusual is that the church is not on top of the hill just a few metres further away. It is associated with the village pond (now filled in and used as a car park). And more curiously, the recorded history of the church often speaks of repairs having to be done because of water damage to the chancel. Some bright spark had the brilliant idea of building it over a prolific spring. In 1699, the diary of Abraham de la Pryme talks of the spring gushing in the chancel and there is mention of graves being lined with straw which was intended to hide the standing water. The spring was piped in 1838.

“In the same way Glanford Brigg, the new community which settled at the foot of the bridge over the Ancholme, and which lay in Wrawby parish, was served by a hermit in an oratory built in honour of Holy Cross and the Blessed Virgin.” This quote from Dorothy Owen’s book ‘Church and Society in Medieval Lincolnshire’ suggests the hermitage was a bridge chapel associated with the bridge at Brigg but Wrawby church site is close enough for it to have been the forerunner of the church, particularly as the names match.

Although there is no physical evidence, it is possible this place was special to the Iron Age people too as their beliefs incorporated watery places. The site of Wrawby church may have held a religious significance for people back into the mists of time, albeit a different belief system.

So, was there a Roman villa associated with all this too? Following the magnetometer survey, interesting looking areas were examined by putting in some trial trenches. The funding was never intended to fully investigate the site. With no obvious villa a scratch of the head left experts wondering where all the roof tiles came from. Roman roof tiles are heavy and any building so adorned would have to have substantial walls and/or internal supports to hold up all that weight. The tiles themselves would have been made locally as it was not economically viable to transport them over long distances. The Wolds have adequate pockets of clay so such would not have been a problem.

Most of the Roman villas known along the edges of the Ancholme valley are aisled buildings. That is they have two rows of large supporting columns internally. While these were probably great tree trunks, the ground had to be prepared and often a subterranean heap of stones supported each column. This is known as a post pad and one pair were exposed. Don’t mistake the grand villas of the south for the villas in North Lincolnshire. They are simply not comparable, although the villas known in this region do have mosaics as well as painted wall plaster and the one thing that has never come to light at Wrawby is even the smallest sliver of mosaic.

Imagine a well-to-do Iron Age family at the time of the Roman invasion in 43AD. They may already have had contact with the continental goods via the Humber and Ancholme river – particularly if this family controlled the river crossing and had a place of veneration. People may have asked the gods to save them from the invaders, they may have asked for prowess in battle against them but the signs are that the tribe in this area, the Corieltauvuli did not fight the Romans. Pottery from this transitional period is as rare as ‘hens teeth’, but there is a nice small collection from Wrawby that shows money and access to goods. Although they didn’t have lifestyle magazines back then something made the people want to be Romanised. They yearned for their foods, their pots, money and probably clothes. One of the reasons the Roman empire expanded so far is that they were very good at assimilating local beliefs and culture into their own. This can be seen at Bath. So, our Iron Age family were desperate to appear upper class – to have what the Romans brought with them. Perhaps they let the family keep control of the crossing (in some form). They certainly got richer. They built a square timber house instead of the typical round house and they painted the walls with an exquisite, colourful design. It may even have been a kind of pub – a watering hole before crossing the river. The building, a rare painted rural structure could be called a proto-villa but for some reason it never grew into a fully fledged villa – it never had a mosaic. A later aisled building on the site shows that it did continue (perhaps as a farm) but not enough work has been done to find out what happened. It is likely this intriguing site will never be fully investigated as the archaeology lies directly beneath the plough soil and in the space of about five to ten years, the beautiful plaster and traces of buildings and pot will be gone, churned up by the plough.

It’s surprising what fieldwalking can achieve.