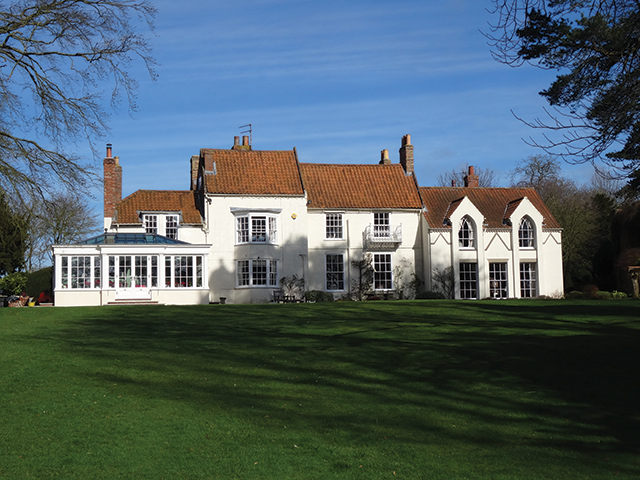 On 6th October 1892, Alfred, Lord Tennyson died aged 83. This year marks the 125th anniversary of the death of one of England’s literary heroes and his life and works continue to be remembered both in Lincolnshire and beyond.
Tennyson was born in Somersby in the Lincolnshire Wolds on 6th August 1809. He was the fourth of twelve children born to George Clayton and Elizabeth Tennyson. The family lived in the Rectory, Somersby House which Alfred’s grandfather had extended for his son and family. His father was the Rector of Somersby and Bag Enderby churches, the living acquired for him by Alfred’s grandfather.

Alfred went to the village school with his brothers in a cottage in Holywell Wood. Holywell is believed to be the site of a medieval well. Alfred’s father sent him to Louth Grammar School, but after four unhappy years he returned home to be home schooled. Reverend Tennyson had an extensive library which provided Alfred with a wide range of books to read. He slept in the attic with his two older brothers and it was here that he wrote his early poems, along with his brother Charles.

As a young man in a busy home full of brothers, sisters, servants and animals, Alfred walked along the quiet winding lanes and across the fields, finding peace and developing a deep love of nature and the countryside which was reflected in his work throughout his life.

‘The whispering leaves, the gushing stream,
Where trembles the uncertain moon,
Suit more the poet’s pensive dream,’ The Walk at Midnight

‘The Brook’ is one of Tennyson’s famous poems, based on the River Lymn which runs around the boundary of the gardens of Somersby House, ‘I steal by lawns and grassy plots,’. From Somersby and Bag Enderby, the river passes Stockwith Mill, eventually going out to sea at Gibraltar Point.

‘I chatter chatter, as I flow
To join the brimming river,
For men may come and men may go,
But I go on for ever.’ The Brook

The Tennyson family spent their holidays in cottages in Mablethorpe near the sea bank. Tennyson enjoyed walking near the sea, especially in rough weather. Charles’ and Alfred’s collection of poetry ‘Poems by Two Brothers’ was published by Jacksons, a printing firm in Louth in 1826. With their payment for the book, it was to the sea at Mablethorpe they went to celebrate, reciting poems along the way.

In 1828 Alfred went to Trinity College Cambridge where he met his friend Arthur Hallam. A year later, Alfred won the Chancellor’s gold medal for poetry with his poem ‘Timbuktu’. When his father died in 1831 Tennyson returned to Somersby to help his mother and family.

Near to Somersby, Gunby Hall and Harrington Hall provided a social life, friends and a source of inspiration for Tennyson. Between 1834 and 1836 Tennyson wrote poems to Charlotte Rosa Baring, one of two sisters living at Harrington Hall. He later wrote the poem ‘Maud’ while living on the Isle of Wight, which is believed to be about Rosa. Standing on Harrington’s terrace garden, the ‘high Hall-garden’ I could picture Tennyson striding across the fields and calling:

‘Come into the garden, Maud,
I am here at the gate alone’. Maud

Gunby Hall where the Massingberd family lived also featured in Tennyson’s poetry. A framed verse in the entrance room, handwritten by Tennyson and dated 1849, reflects the delight of Gunby Hall for visitors today:

‘And one, an English home – grey twilight pour’d
On dewy pastures, dewy trees,
Softer than sleep – all things in order stored,
A haunt of ancient Peace.’ The Palace of Art

Tennyson liked to compose poetry as he walked, whether it was in the Lincolnshire Wolds or on the coast of the Isle of Wight. It is fitting that during the 2017 Wolds Walking Festival his poetry was read at key points along the routes. Over 100 people took part on the first two walks when a new walking leaflet was launched, ‘In the Footsteps of Tennyson’. A children’s ‘Tennyson Trail’ and another longer walk ‘Tennyson Country’ were also part of the walking festival this year. I joined the children’s walk which began at Bag Enderby church with the reading of a poem before we crossed the fields to Somersby House’s garden.

‘Come from the woods that belt the grey hill-side,
The seven elms, the poplars four
That stand beside my father’s door,’ Ode to Memory

St Margaret’s church in Somersby is the sister to the Bag Enderby’s St Margaret’s church. Both churches were built from local green limestone. All the Tennyson children were christened in the font and under the bell tower there is a bust of Tennyson. St Margaret’s church at Somersby has undergone recent restoration work during which graffiti was found scratched into stone hidden in the tower. It reads ‘AT 1837’, the year Tennyson left Somersby and perhaps he was leaving his mark before he left.

Tennyson married Emily Sellwood in 1850, the year he also became Poet Laureate. They eventually moved to Farringford House, on the Isle of Wight but Tennyson’s memories of Lincolnshire home continued to influence his writing, as shown in the dialect of the ‘Northern Farmer’:

The death of the Poet Laureate, a Victorian celebrity, affected many people including Queen Victoria who had bestowed his title on him in 1883. Thousands of mourners attended Tennyson’s funeral on 12th October 1892 in Westminster Abbey. He is buried in the Abbey with Thomas Woolner’s bust of Tennyson in Poet’s corner. The Royal Mail issued four commemorative stamps in March 1992 to mark the centenary of his death. The stamps show portraits of Tennyson, imposed with paintings showing scenes form his poems. ‘Poems on the Underground’ have featured Tennyson’s poems in the past and are showcasing another one to mark this year’s anniversary in the autumn.

Tennyson has inspired many people with his poetry. The Tennyson Society promotes the life and work of Tennyson with events organised for members, including a birthday memorial service at Bag Enderby church and a wreath laying service in Westminster Abbey in October. The Tennyson Research Centre in Lincoln has unique items from the libraries of Tennyson and his family. There are manuscripts, proofs and first editions, over 9,000 letters, photographs and possessions. I saw a letter of sympathy written by Queen Victoria on the death of their son, Lionel and the handwritten annotated manuscript of ‘In Memoriam’. There is an exhibition in October, called ‘The Poet’s death and how he survived it’. Along the Water Rail Way, a cycle and walking route from Lincoln to Boston, six pieces of art were commissioned to celebrate Tennyson’s work. They feature the poems ‘The Lady of Shalott’, ‘The Brook’, ‘The Gardener’s Daughter’ and ‘In Memoriam’:

Whether driving or walking in the Wolds, I feel our Lincolnshire poet’s voice still echoes along the babbling brook, across the waving barley fields and in the hoot of an owl in the tree.