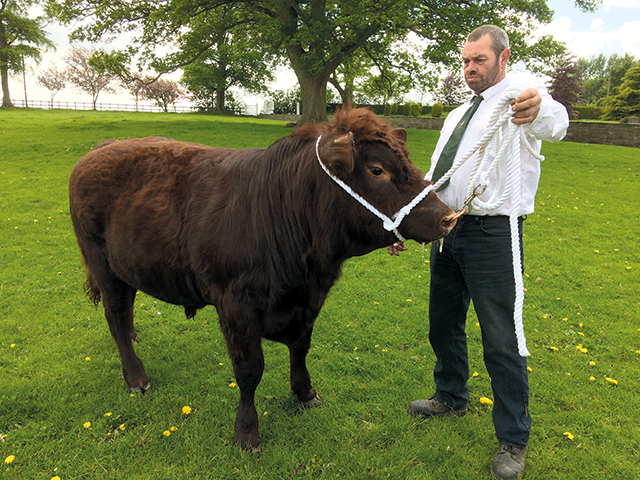 Finest of his breed

Hedley Needler is well known and respected across the UK as a leading breeder of Lincoln Red cattle. His Walmer herd, based at Ranby, has been his life’s work producing prime beef and memorable championship winners for decades.
Mr Needler celebrated his 100th birthday at the end of last year but he is still out each day overseeing the 163 strong herd, his stockmen and the breed book. He is a member of the Lincoln Red Cattle Society and is looking forward to catching up with friends and fellow breeders again at this year’s Lincolnshire Show.

He is the son of James John Needler who started a herd of Lincoln Reds with twelve cattle on a farm at South Elkington in 1920. The family moved location several times, to farms at Acthorpe and Limber but in 1946 Hedley set up on his own with one-third of the Acthorpe herd at Walmer House Farm, South Killingholme. The forty-three females, nine heifers and seven yearling bulls were the foundation of today’s Walmer herd. Hedley Needler married Winifred Alice Leech in the same year and their daughter Jo was born in 1950.

When the Walmer House land was bought for oil refinery development in 1966 Hedley, his family and his growing herd moved to Vicarage Farm, Killingholme before settling at Ranby Grange in 1970. The Walmer herd today consists of around seventy breeding cows, as well as calves, bulls and heifers.

Asked why Lincoln Reds have been a life-long passion, Mr Needler said: “Well I suppose I don’t like change,” but this masks his pride as custodian of his animals, his quest for the perfect specimen and the pleasure that he still finds in showing and sharing the bloodline.

The breed has also been undergoing a real resurgence in the past couple of years with top bloodlines much sought after for their commercial attributes and herds are growing.

So what does make the ultimate Lincoln Red? Even fleshing, no excessive fat and the Walmer herd had Tuscan Chianina blood introduced in the 1970s, which greatly improved fleshing and size to the strain.

Every owner has one animal which is exceptional, which finds a place in people’s hearts as well as filling the trophy cabinet with its awards and for Mr Needler, so far, this has to be Walmer Lobelia. Lobelia passed away last year but the offspring of this multi-award-winning cow are a strong presence in the herd. She was chosen to be photographed for a postcard book of Championship Breeds called Beautiful Cows, so her legacy lives on in print as well as in the new generations.

The Needler family used to visit up to eleven shows each year and although Mrs Needler has passed away, Hedley and Jo remember many happy times at the Royal Show, Highland Show, Yorkshire Show and many others showing their best animals. The list of achievements of Walmer cattle is astonishing including winning Supreme Champion at the Royal Show 10 times, 76 Supreme Championships across the UK, 71 male championships and 45 female championships.

Hedley Needler cannot remember missing a Lincolnshire Show except for illness maybe or the occasions when the show was not held. He has been a cattle judge himself at many county shows but he doesn’t lead his cattle in the ring any more and a courtesy vehicle is available to make sure he can meet old friends in the livestock sheds.

The Walmer herd will be represented in the show ring with six cattle and two calves this year, all new to their classes. Walmer Winston, an 18-month-old bull is gaining show ring experience, will add more bulk yet but is a good contender. A beautiful calf, named Lobelia, will be led out with her mother. Walking the bull is the job of stockmen Michael Whitwood and his son Ashley. Jane Benge helps part-time with cattle administration on the farm and in her other role as a local hairdresser has skills which ensure the cattle are turned out with immaculate grooming. Jane will lead Lobelia and the other calf – a job she loves and will also fulfil at two other shows this year, Woodhall Spa and the Yorkshire Show – for the Needler family.

Mr Needler did say that identifying and nurturing potential new champions begins at their birth. In his experience there are more disappointments than unexpected successes but the new generation of the Walmer herd are already showing the finest attributes of their pedigree and the exceptional knowledge of their breeder.