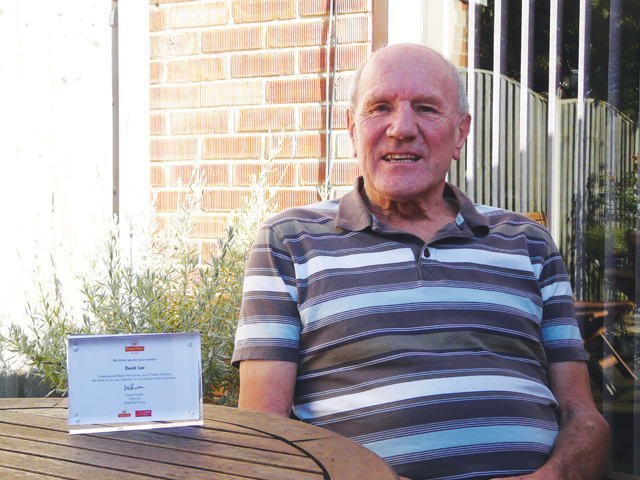 It’s been quite a few years since Grantham lad David Coe started working at the Post Office. In June 2015, at the age of 73, he finally hung up his postbag after 57 years of service, making him one of Britain’s longest ever serving postmen.
In 1958, just a few weeks after his fifteenth birthday, David (or Sid as he later became known at the sorting office) joined the General Post Office, or GPO. As a telegram boy his first job was to deliver across a wide sweep of the Lincolnshire countryside.

“I loved it,” says Dave, “it was very glamorous for a young lad, with my BSA Bantam motorbike, leather tunic and peaked cap. Everyone knew the telegram boy.”

It was a time when everyone rode a motorbike, or at least wanted to, and so to be able to do so as part of your work was a dream come true, Dave explained. It was also a time when receiving a visit from the telegram boy was not always seen as good news. In fact for many it could mean only one thing, a death in the family.

“At least a couple of times I had ladies faint merely at the sight of me,” recalls Dave.

At the age of sixty-five, after a mere fifty years of service, Dave was given the option of continuing to work for a few months more, the laws governing retirement having been changed just a few months earlier. Six months became seven years. On that occasion he received an invitation to attend the annual garden party at Buckingham Palace in honour of his long career. “My wife, Kelly, and I really enjoyed that day,” he recalls. “The Queen was there, although we weren’t introduced, and she was wearing her usual white gloves. I can remember being struck by how short she was!”

Dave’s career was very nearly cut drastically short when, just a few months after starting on his motorbike round, he was hit by car and spent ten months in hospital. Undeterred he was soon back on the three-week rotating shifts that the Post Office then operated on.

“One week on the Skillington Buckminster round, one week to Fulbeck and Caythorpe and then one week doing nights at Grantham station,” says Dave. It was one such night, he remembers, when the Great Train Robbery took place. “We were sorting the mail going north and south that night, and obviously when we heard about the robbery it was a big talking point. It was so audacious and nothing like that had ever happened before.”

There have been big changes to the postal service over the course of those six decades but, he feels “deep down they were probably for the better. Without it the service would have become a dinosaur.” He continues: “Although I’m not sure the service you get now is what it was in my day.”

One of the biggest changes was in the working environment. “Our uniforms had to be immaculate and if the inspector saw me without my cap on…” Dave finishes his sentence with an intake of breath and raises his eyes to the ceiling. “It was very regimented really, and a lot of the staff where in fact ex-military. We were always addressed by our surname and the inspector was ‘Sir’… it’s much more relaxed now.”

Pressed on the more unusual sights he must have come across over the years, Dave is of course the height of discretion. “Do you just want to hear about the repeatable ones,” he jokes. He then shows me a certificate on the wall that reads ‘David Coe, for your resourceful and exceptional conduct following a heart attack of one of your elderly customers’ and goes on to explain that he had had to break into the old gentleman’s house when he saw, through the window, feet sticking round the corner. “I managed to revive him and call an ambulance, but sadly a couple of weeks later he died in hospital.”

As to what he liked most about being a postman, there’s no hesitation in Dave’s response: “Three things… being outdoors, being independent but most important of all being part of the community. For some people I was the only contact they had and so I would make a point of taking time to have a chat. I found that both heartening and disheartening at the same time,” he says with a hint of sadness, and then continues with a smile, “it also explains why my rounds often took longer than anyone else’s. Not that I minded, though, because I didn’t see them as customers but as friends.”

He has to think a while about any downsides to the job, and then remembers that of course there was one. “Sometimes the weather could be terrible. I used to deliver round Fulbeck and Caythorpe by bike and would then have to cycle back to Grantham. That was tough sometimes. The weather up on Caythorpe Heath can be horrendous and huge snow drifts sometimes blocked the road,” he says, “but we had to deliver whatever the weather, that was our job.”

Even when delivering by van the weather could be a problem, particularly snow. “Everytime I got back into the van a bit more snow would come in on my boots and melt. By the time I got back to Grantham the footwell was two inches deep in water and my heel was numb with cold.”

A good pair of boots was essential and for many years the Post Office supplied Doc Martens, “the best boot by far,” he pronounces confidently. “When you walk twelve to fourteen miles a day for forty years that makes all the difference.”

After fifty-seven years in the service and thirty-eight years doing the Fulbeck and Caythorpe round, what will he miss the most? “The people, most definitely. I’m loving retirement and don’t miss going into the office and doing the sorting at all. But I do miss the people.” Dave gets up and goes into the next room, returning with a large bundle of cards. “These are the cards I got from people in the village when I retired,” he says. There must be at least a hundred, all saying nice things. He reads a couple out, ‘Thanks for being the cheeriest person around and for all the kind help over the years’ and ‘You’re the best postman in the world’ (written in a child’s writing). There is, not surprisingly, a hint of emotion in his voice.

For all the years of service and friendship, the community, young and old, will undoubtedly miss Dave. It is hard to quantify what he gave but even harder to replace. As a token of appreciation, he was invited back to the Harvest Supper in Fulbeck last September as a special guest and to receive their thanks. No doubt in the future there will always be a welcome cup of tea somewhere in the village.