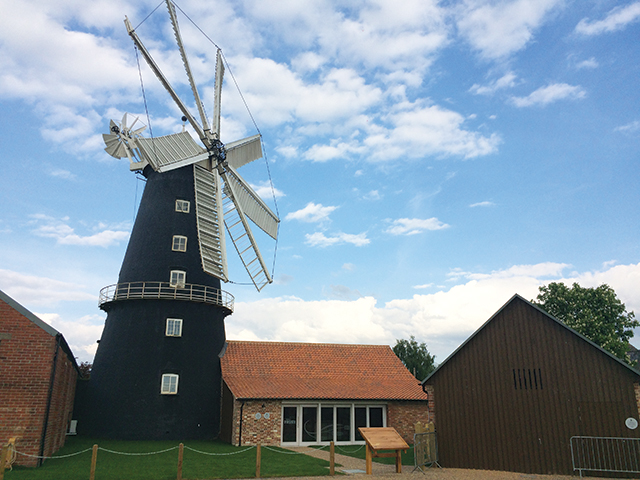 It’s the culmination of a ten-year plan for the eight board members and more than sixty active volunteers who have worked tirelessly to oversee the £1.7m regeneration of an iconic and popular county landmark – and now thanks to their efforts Heckington Windmill is home to a first class visitor centre.
Heckington Windmill is the only eight-sailed tower windmill with its cap and sails intact, operational in the world.

As well as transforming the granary and cart shed into the new visitor facility, Heckington Windmill Trust has also created a new entrance area, incorporating space for talks, education and displays on the site of the former piggeries.

This in turn has made it possible to add a new disabled lift providing direct, level access to the ground floor of the eight-sailed mill, where a pair of millstones is being re-installed so disabled visitors can also enjoy the full milling experience.

The trust has turned the original bake house into a baking school with teaching and demonstration areas large enough to accommodate up to fifteen pupils, extended the tea room, relocated its shop and created a new car park and toilet block.

“It’s a large team who have a wide range of expertise and skills. This has allowed the project to move forward – without them it would have failed.

“It’s our job to look after this site for the foreseeable future; the trust’s sole purpose is to preserve Heckington Windmill – to open it to the public, to educate people in milling and to provide a place where we can continue the traditional process of producing a high quality food source from the local environment.” Jo Lewin, in charge of admin and finance, has worked alongside Jim to deliver the project.

Chairman of the trust, Charles Pinchbeck said the project began more than a decade ago when the Pocklington milling family offered the trust the opportunity to buy the neighbouring mill house.

“The bake house was the first part of the scheme to be completed and with its re-opening, baking has taken place on site for the first time in 100 years. Visitors are now able to bake bread using flour ground at the mill and volunteers are also making bread and cakes for sale in the shop and tea rooms.”

After a competitive tendering process two contractors were chosen to complete the remainder of the project overseen by Darren Dickinson of main contractors Newman Moore of Sleaford and Garry Farmer Builders looking after the extension of the tea room in the Miller’s House.

“The Miller’s House was first extended in the 1970s, so that has been added to that again to include extra seating for the tea room – we’ll have approximately thirty covers now,” said Marie Moonie, tea room manager.

Accessibility for all is very much at the forefront of the windmill’s regeneration scheme; the new additions mean volunteers will be able to show and teach disabled visitors how to use the milling machinery too.

“We have wheelchair level access into the entrance of the visitor centre and a disabled lift to take wheelchair users onto the ground floor level of the mill,” explained Mr Bailey.

Heckington Windmill produces white, brown and more recently self-raising flour from the grains harvested from surrounding fields. It is also the only working mill grinding malted barley which is used in the beer produced by 8 Sail Brewery, an on-site micro-brewery.

The five-storey mill, which dates back to 1830, has remained open to visitors throughout the regeneration work and will host an official opening ceremony for its new facilities later in the summer.

New sails were installed in 2014 and prior to this Heckington Windmill attracted around 4,000 visitors a year, since then it has been averaging around 7,000 and once the new project is fully completed the trust anticipates this will rise to in excess of 15,000 a year.

”It’s the end of a long hard journey,” said Charles. “We’re exhausted but absolutely delighted that such an important part of the heritage of the county and indeed the country has been saved. The buildings look stunning but more than that our visitors are flooding in and obviously loving it. It’s become a place people love to visit – the whole atmosphere is wonderful.”

To find out more about Heckington Windmill, its opening hours and forthcoming events visit www.heckingtonwindmill.org.uk/

VOLUNTEERS FROM NEAR AND FAR
Heckington Windmill is held in special affection by the local community and in all the trust can call on more than 300 supporters of which sixty plus are active volunteers.

Built as a five sailed mill in 1830 and owned by Michael Hare, the mill passed to local miller Sleightholme Nash around six years later when he married Michael’s widow, Ann. The Nash family ran the mill until a freak accident resulted in the caps and sails being destroyed. The mill was abandoned in 1890.

The story of the mill now turns to John Pocklington of Wyberton who bought at auction the eight sailed gear and cap from the defunct Tuxford mill. He acquired the tower at Heckington and spent the next three years installing his purchase. The Pockington family operated the mill into the middle of the twentieth century. Between the Nashs and the Pocklingtons there are plenty of local family connections which have spread across the globe.

Volunteering at the mill as part of their four month visit to family and friends in Lincolnshire are New Zealand residents Dave Foster and Susan Smith. Dave was born in Lincoln and Sue traces her family from descendants of Sleightholme Nash.

“Elizabeth Nash married Alfred Humberstone and they moved with their family to New Zealand in 1914. Sleightholme Nash is my five times great grandfather,” explained Susan. “We are proud of our connection to the mill and have enjoyed doing our bit with handiwork and adding finishing touches to this fantastic project.”

But the work does not stop here– volunteers are also striving towards museum accreditation with the help of an archivist, Michelle Andrews and have been carrying out further research into the history of the building, its inhabitants and various milling artefacts, their findings from which will also eventually go on display.

As well as continuing with general maintenance of the site and buildings the team is also forging ahead with experiences and events, including a display of world-renowned Tuxford machinery due to take place next year.

Run solely by volunteers – apart from the tea room manager Marie Moonie and bakehouse manager Veronica Marris who are employed – the trust is always keen for more people to get involved in its work.

“We are open to anybody to volunteer,” added Charles Pinchbeck, “We have fourteen year olds helping out and our eldest volunteer is ninety-three.

“We have such a diverse amount of roles available from giving mill tours, working in the mill, to the tea room and the bake house – there’s lots of opportunities for everyone.

TAKE TEA IN AN EDWARDIAN PARLOUR
The renovation and extension to the Miller’s House has given the trust the opportunity to redecorate the parlour and study in vintage styles.

The Miller’s Parlour is in Edwardian style to reflect in which the next generation of the Pocklington family would have spruced up their new home. Michelle Andrews and her research team have created the interior design, sourced furniture and artefacts and added photographs and memorabilia from the family at that time.

The parlour and the nearby study have been re-instated to as near their original layouts so visitors can sit in there, take high tea and enjoy the rooms as they would have been in the miller’s day. The Miller’s Study which had been used as an office has a well preserved 1930s tiled fireplace which has been the inspiration for décor, furniture and artefacts from that decade.

Tea room manager Marie Moonie has been at the mill for ten months and has seen the transformation: “This really has created a ‘wow’ factor which customers love. Whether they are enjoying refreshments inside the tea rooms or outside in the courtyard, the whole scheme is a stunning backdrop for the mill and wonderful visitor experience.”

An extension to the tea room, named the Garden Room, has patio doors which open onto the garden. It will make an ideal venue for events and open days – the mill was recently involved with the Sleaford Live festival – of which there are plenty more this summer.