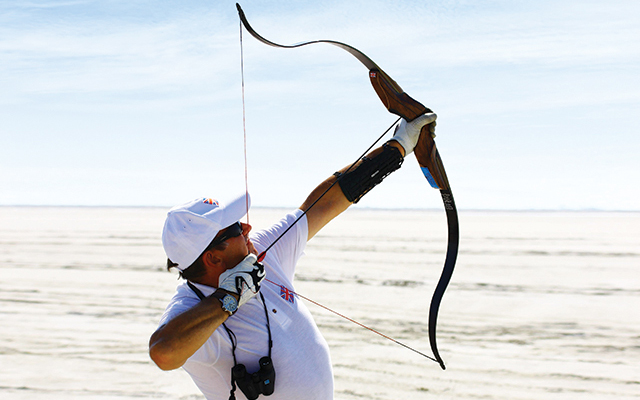 What Michael Willrich doesn’t know about archery isn’t worth knowing – it’s a bold claim but with a sporting career spanning several decades, and numerous medals and world records to his name, there’s no doubt he’s an expert in the field, says Kate Chapman.

And so is his wife, Janice. Between them the couple have achieved more than 50 flight archery world records and have recently returned from America with more silverware after competing in the WRS USA Open Flight Championships and World Archery Flight Championships.

Flight archery is a minority discipline of archery – rather than shooting at a set target, the object is to shoot your arrow as far as possible. There are numerous bow classes – with bows ranging from 35lb up to 70lb plus unlimited bow weight divisions – and Michael and Janice have both represented Great Britain at flight archery on many occasions.

“Sadly flight archery doesn’t get too much publicity because it’s a minority sport and not an Olympic one,” explains Michael, “but it’s thanks to our development with the equipment and arrows that enables target archery to flourish. If it wasn’t for flight archery, Olympic archers wouldn’t have seen such innovations made with their bows.

“I suppose it’s a bit like throwing the javelin – but with a bow. For me, I just love the challenge of trying to go further. When I first started shooting arrows in the field behind our house, I’d achieve distances of about 80 yards.

“I’ve shot in the GB flight championships for around thirty years and won the unlimited target bow class 29 times. In 1989 my winning distance was 378 yards – this year it was 622 yards. That’s a huge difference, which is all down to the equipment and development and I really enjoy working on that side of things too.”

Michael’s lifelong passion for archery began when he was a youngster, growing up in Staffordshire. He stayed with an aunt in the summer holidays and her housekeeper bought him his first bow in 1955, when he was 8.

“This particular summer, I remember we were out shopping and the housekeeper just asked me if I would like a bow,” recalls Michael, who moved to a village in the Wolds a couple of years ago.

“She took me into a sports shop and bought me a three-foot bow with sixteen-inch arrows and I used it to practice with in the field behind the house, trying to shoot the arrows as far as I could.”

Michael joined his first club – the Hollybush Bowmen – in 1969, where he recalls there was only room to shoot distances of around thirty yards, so he moved on to another club the following year and started representing his county in 1971, continuing to do so until 1992.

As well as traditional target and flight archery, Michael also has a keen interest in Clout archery – a discipline where archers shoot arrows at a flag (known as ‘the Clout’) from a relatively long distance and score points depending on how close each arrow lands to the flag.

He began focussing solely on flight in 1992 after a problem with his shoulder meant he was unable to fire the large number of arrows required for target contests. Over a two-day contest competitors shoot in excess of 280 arrows and this coupled with holding a heavy bow made it incredibly difficult for him to compete.

In comparison flight archers fire considerably fewer arrows in competitions, and at a different angle of forty-five degrees, which meant Michael could still continue in this discipline.

A former industrial chemist by trade, he began representing Great Britain in 1995 – winning two golds and a silver in his first international competition, where he also secured two world records. Since then Michael has won more than 34 golds, numerous second and third spots as well as achieving 24 world flight records, three of which he still holds.

He also makes aluminium points and nocks (devices that enable an arrow to fit the bowstring) that are used in flight and wooden barrelled arrows for his longbows, which he experiments with and makes from various different wood laminations.

Janice came to the sport slightly later after being encouraged to take it up by her husband.

“I was in my fifties when I first started. Because I was going to the competitions Michael just said to me ‘come along, you can do this and I will teach you’,” she recalls.

“He is a really patient teacher – he eats, sleeps and breathes archery, because he’s been doing it for so long he really is an expert; in fact what he doesn’t know you could write on the back of a postage stamp!

“I’ve really enjoyed it and have achieved so much, gaining 28 world records, but I have a few health issues now, so at my age after the World Championships I’ve decided to retire and let other people have a chance.

“I’m not going to break any more records now – I still go to our local club and stay involved, as we have so many friends who we have made through archery, it’s been wonderful.”

As for the future, Michael is keen to continue competing and record breaking – his current longest distance is 968 yards with a specialist flight bow and since 1989 he has gained 30 British flight records.

“It’s been lovely to be able to compete together with Janice, now she’s retiring I still intend to keep on going, although I only really shoot once a month now,” he added.

“I have won all the classes and weight divisions I have entered since 1989 at some time or other and have shot a world or British record in them too, but I would like to break the NAA 70lb field bow regular class which has stood since 1997 – I was only off 14 yards at Bonneville
this year.

“There are only four competitions held in this country as it’s difficult to find the space to hold them, that’s why it’s so much more popular in America. It would be good to start an East Midlands Flight Championships if anyone has a grassed field long enough between 800 and 1,000 yards long.

“Maybe one day we’ll see it included in the Olympics – it would be great for the sport to gain more recognition.”