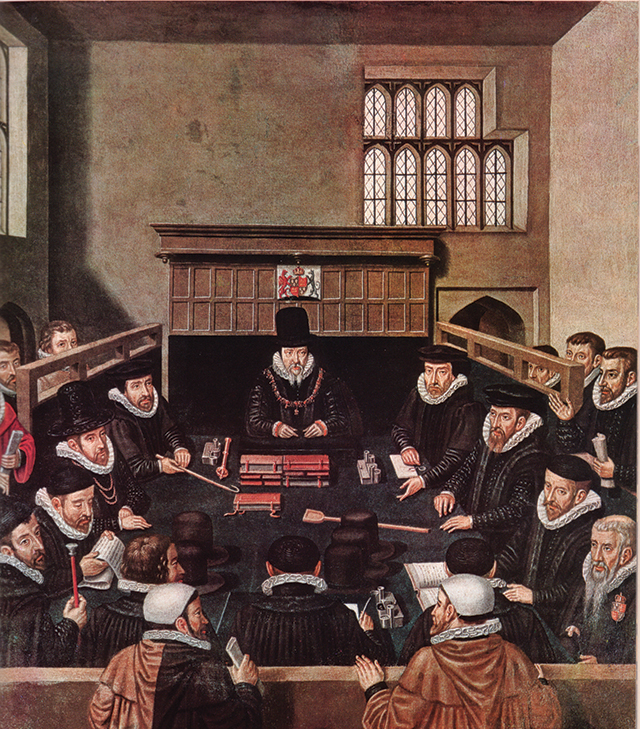 Founder of a dynasty

1541 – William Cecil marries Mary Cheke, whom he met whilst at Cambridge

1542 – Birth of William’s eldest, Thomas Cecil,
who will serve against
the Armada

1545/6 – Cecil marries
for a 2nd time, to Mildred Cooke, the daughter of
Sir Anthony Cooke

1563 – Birth of Cecil’s son, Robert Cecil, who will succeed him as the
queen’s chief minister

1567 – Persuades Elizabeth I to aid the French Huguenots

1585 – Persuades Elizabeth I to aid the Dutch Calvinists

As anniversaries go, they don’t come much better than a 500th. Stephen Roberts looks at the fascinating life of William Cecil, 1st Baron Burghley, who was born in 1520 in Bourne.
He would go on to be a statesman of the first order, chief advisor to Elizabeth I for most of her reign, twice Secretary of State, and Lord High Treasurer. As the father of Robert Cecil, 1st Earl of Salisbury, he was also the founder of a dynasty that bestowed two Prime Ministers on this nation.

William Cecil was born on 13th September 1520 in a house in Bourne town centre that is today’s Burghley Arms, which sits next to the 1821 Town Hall. A plaque proclaims, ‘William Cecil, Lord Burleigh, KG Lord High Treasurer in the reign of Queen Elizabeth I, born here, 13th September 1520’ (Burleigh is an alternative to Burghley). He was the son of Richard Cecil of Burghley (c.1495-1553), who rose to prominence in Henry VIII’s service and left large estates on his demise, although it seems to have been Richard’s father, William’s grandfather, David Cecil (c.1460-1540), who moved the family from its ancestral home on the Welsh Marches to Stamford.

William was educated locally (King’s School, Grantham and Stamford School), and, whilst just a nipper, was a ‘page of the robes’ at court, before heading to St John’s, Cambridge in 1535, where he showed ability in his studies, displaying ‘diligence and aptitude’, but also in romancing, as he struck up a friendship with a wine-seller’s daughter.

William and Mary Cheke married in 1541, not long after Cecil had embarked on a legal career at Gray’s Inn. Sadly, Mary (sister to the humanist John Cheke) died quite soon after, but not before she’d bestowed a son on William, who was named Thomas (1542-1623) and went on to be a soldier. William’s sojourn at Gray’s Inn saw him not only studying the law, but also history, genealogy and theology, as he put in place the academic building blocks that served him well later on. Cecil was soon married for a second time, in 1545, to Mildred Cooke, daughter of Sir Anthony Cooke, which also, handily, secured him the patronage of the Protector of the time, Edward Seymour, 1st Duke of Somerset, who made him Master of Requests in 1547 (when Henry VIII died in January 1547, Somerset was the first Lord Protector (1547-49) during the minority of Henry’s young son, Edward VI).

At court, you had to be careful who you aligned yourself with. Protector Somerset also appointed Cecil his secretary (1548) but then fell from power (October 1549) and almost took Cecil with him. William undoubtedly learned a lesson about power politics and allegiances as he spent two months incarcerated in the Tower of London. Come 1550, however, he was rehabilitated due to his obvious abilities and became secretary of state under Somerset’s successor, John Dudley, Earl of Warwick, who would become the 1st Duke of Northumberland the following year. In the same year (1551) Cecil was further rewarded with a knighthood.

Cecil showed his mettle during the decade or so leading up to the accession of Elizabeth I, when England went through monarchs, Protestant and Catholic, like a dose of salts. Those were troubled times and Cecil showed himself to be an astute politician. Amongst other things William was responsible for improving trade by throwing it open to all comers and abolishing restrictive monopolies. When the Catholic Mary I succeeded Edward, William embraced Catholicism, so ‘keeping his head down’ in other words.

Before Mary’s death, Cecil had already started colluding with her younger sister and when Elizabeth acceded to the throne (1558) the 38-year-old Cecil, by now a master of his trade, could once more avow his Protestantism (such as it was) and become her principal secretary of state. For the next forty-odd years Cecil would be the chief architect of the first Elizabethan age of greatness. He was Elizabeth’s most important and best appointment. One of his first moves was a reform of the coinage (1560-61) which saw monetary chaos replaced with a new currency and much-needed stability.

As far as religion was concerned, Cecil was more sympathetic to the Puritan cause than his boss and persuaded Elizabeth to support both the French Huguenots (1567) and Dutch Calvinists (1585). His good advices reaped rewards and in 1571 he became the 1st Baron Burghley, becoming the queen’s Lord Treasurer the following year, a position he held until his death. Cecil presided over the Court of Exchequer, resulting in many important financial reforms as his influence spread like a web. He was ‘shrewd and cautious’ in both domestic and foreign policy, leaving no stone unturned, yet also displaying liberal values. When he had to act and act decisively, however, he did just that. He was never one for ‘favourites’ or indeed for harbouring grudges, sentiments that make his stewardship sound much like a meritocracy.

Cecil’s undoubted wisdom was passed on to his son, Robert (1563-1612), in various letters, including ‘I advise thee not to affect, or neglect, popularity too much’ (so, balance in all things) and in a tome of March 1596 ‘obey her majesty’s commandment … she, being God’s chief minister, it shall be God’s will to have her commandments obeyed’ (know your boss and act accordingly). Cecil’s devotion to Elizabeth extended to his employment of a network of spies to root out plots threatening to topple her. If it sounds at all underhand, his justification would have been that her enemies were equally determined and ruthless and information was power. The chief spymaster though was Cecil’s sidekick, Sir Francis Walsingham (1532-90), whose methods exposed the Catholic plots that led to the execution of Mary Queen of Scots.

The circumstances surrounding Mary’s execution in 1587 have always been mired in controversy. Under house arrest in England, Mary had undoubtedly been plotting against Elizabeth, with Catholic conspiracies aplenty looking to lift her from captivity and place her on the English throne at Elizabeth’s expense. Whether Elizabeth was reluctant to see her executed has always been a moot point, but, in any case, the smart money seems to be on Cecil having persuaded her, by hook or by crook, to sign Mary’s death warrant. On Cecil’s watch, Elizabeth remained safe and papal power would not return to these shores.

If the fate of Mary was one policy where queen and minister may not have seen eye to eye, the other was the queen’s marriage, or rather non-marriage. Cecil believed it was vital Elizabeth married, both to end the nation’s isolation, but also secure the dynasty with an heir, but the lady, as the Lincolnshire saying goes, was not for turning. Otherwise, they were pretty much in accord. Elizabeth’s problem would be to find men of the stature of William Cecil once he was gone. He had proved himself efficient, sensible and devoted to the queen no matter their differences and had guided the ship of state through the great Armada crisis that followed the year after the Scottish queen’s execution. His foremost gift was to intuitively understand what was in the national interest. Whereas the fervent Protestant, Walsingham, had always been advocating war with Spain, the more moderate and pragmatic Cecil, whose religion never outranked his duty to sovereign or indeed Cecil himself, counselled caution. War would come, but it would be Spain’s doing. A master of discretion, Cecil learned ‘to walk invisible’, to go unnoticed, yet, at the same time, have great influence.

Elizabeth’s legacy may not have been secured through marriage, but Cecil’s was. On his death (4th August 1598, aged 77, in London), he was succeeded as the queen’s chief minister by his younger son, the hunchbacked Robert Cecil, who served both Elizabeth and her successor, James VI and I. William Cecil began work on Burghley House just a few years before Elizabeth’s accession (from 1555), a project that lasted over 30 years. It was based on the privy lodgings of Richmond Palace, where Elizabeth spent much time after she became queen. Burghley remained a residence of Cecil’s descendants although in 1961 its ownership reverted to that of a charitable trust, the Burghley House Preservation Trust, set up by the family. William spent lavishly on his homes, including Burghley, and was buried in St Martin’s, Stamford. The William Cecil at Stamford, a Hillbrooke Hotel, lies within the Burghley Estate, the centrepiece of which is Cecil’s former home.