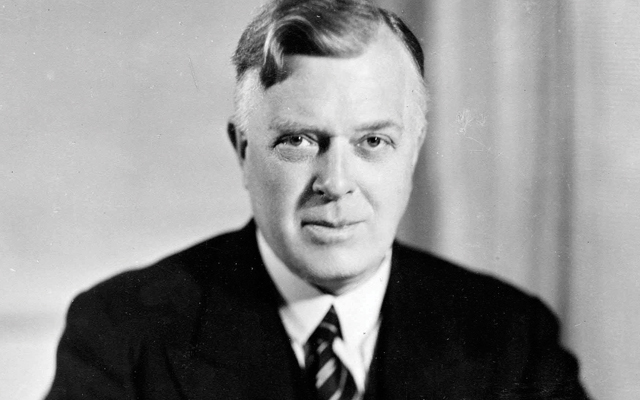 Frank Pick – the man who gave London Underground its identity

Take a stroll around our capital city and you’ll find signs directing you towards the London Underground at almost every turn. Incorporating part of the oldest section of underground railway in the world, the network celebrates its 150th anniversary in 2013, but few people know of the links tying its identity to a Fenland market town.
Both the familiar red Underground logo and the iconic map were among the many designs commissioned by Spalding born Frank Pick, the manager credited with creating what was regarded as Europe’s best urban passenger transport network during the first half of the twentieth century.

Pick was responsible for numerous characteristic features of London life. He introduced destination blinds on buses and concrete bus stops with panels for timetables to be displayed on, while on the Underground itself he oversaw the installation of the first escalators, free-standing seats bearing station names and station signs on platform walls. He also instigated coin-operated ticket machines that gave change in 1928.

Taking inspiration from his travels across Europe, Pick commissioned leading artists to create posters and requested attractive but hard-wearing upholstery fabrics from the best textile designers. He had a new typeface designed and commissioned Henry Beck to create the instantly recognisable diagrammatic map, based on an electrical circuit, in 1933 all as part of his scheme to create an identity for the Underground.

His influence was not just confined to London either: Pick played a pivotal role advising on the construction of systems across Europe, including Moscow – for which Josef Stalin awarded him the Soviet Union’s Badge of Merit.

Architectural historian, Nikolaus Pevsner described Pick as ‘the greatest patron of the arts whom this century has so far produced in England, and indeed the ideal patron of our age’, while other historians compared his influence on London Transport to that of Lord Reith’s on the development of the BBC during the interwar period.

Stemming from a humble background, Pick was the eldest of five children born to Congregationalist draper, Francis and his wife Fanny on 23rd November 1878 at Bridge House, 26/27 Bridge Street, in Spalding.

Biographies describe the young Pick as bookish, preferring to read and build collections of moths and butterflies and other objects found on the beach rather than take part in sports. Before becoming a draper, his father had wanted to be a lawyer and so he encouraged his son to pursue this career path. Pick attended St Peter’s School, York, on a scholarship and was then articled to solicitor George Crombie, qualifying in January 1902. He completed a law degree but was never interested enough in pursuing law and so he began a career in transport, by working for the North Eastern Railway. His first role was in the statistics office, before becoming an assistant to the company’s general manager, Sir George Gibb in 1904.

Gibb moved to the Underground Electric Railways Company which controlled the Metropolitan District Railway and at his invitation Pick followed him, again becoming his assistant.

Following this, Pick quickly moved up the ranks, first taking on the role of publicity officer in 1908. It was while working alongside general manager, Albert Stanley that he began developing a strong corporate identity and visual style for the Underground.

Four years later he became the commercial manager with the specific responsibility of increasing passenger numbers for the tube, rail, bus and tram companies owned by the group. Pick saw that the best way to do this was by encouraging the use of the services outside peak hours and began commissioning posters by artists in various styles promoting the recreational use of the Underground and other transport links to reach the countryside around London and attractions within the city.

A common advertising policy followed, which improved the appearance of stations by standardising poster sizes, limiting the number used and controlling their positioning. Pick then commissioned calligrapher and typographer, Edward Johnston to design a new typeface to make the Underground Group’s posters and signage even more distinctive. The sans serif typeface (known as Johnston) was first used in 1916 and was so successful that, with minor modifications, it is still used today.

He also experimented with the positioning and size of station name signs on platforms and in 1908 settled on the arrangement whereby the sign was backed by a red disc, creating a bull’s-eye – the earliest form of today’s roundel. A year later the bull’s-eye logo was combined with the Underground brand on posters and by 1916 it had been developed further, to include a ring and a bar. The form used today is based on a design by Johnston which Pick commissioned. It was first used in 1919.

In 1921 Pick was promoted to joint assistant managing director of the Underground Group and seven years later became joint managing director. When the Underground Group was taken into public ownership to form part of the London Passenger Transport Board in 1933, Pick became chief executive officer and vice-chairman on a salary of £10,000 (around £530,000 in present day terms). In 1940, with his health failing, he retired from the board. Pick had married Mabel Woodhouse in 1904 but the couple had no children.

Pick also held a number of industrial, administrative and advisory positions – during the First World War he was responsible for the control of the rations and distribution of domestic fuel supplies and in the lead up to the Second World War he was appointed by the government to plan the transport operations for the evacuation of civilians from the capital in 1938.

Despite his place on the world stage, many people in Spalding and indeed Lincolnshire are unaware of the connection tying the county to the development of London’s transport network – but this is due to be rectified when a second blue plaque is installed, on the wall of a building alongside the River Welland, where his Spalding birthplace once stood (the original property has since been demolished).

Spalding and District Civic Society president, John Charlesworth said the organisation only became aware of Pick’s link to the town recently, when a local transport enthusiast put his name forward as one deserving of a plaque.

The unveiling of the memorial is a timely one, with numerous celebrations planned to mark the Underground’s 150th anniversary, acknowledging both its past and present, while highlighting its important role in the London economy.

Events planned include exhibitions and the commissioning of new artworks, alongside the release of a collection of twelve short stories – one on each tube line – by well-known authors.

A set of Royal Mail stamps is also being released as well as a series of heritage rail trips including the use of steam trains.