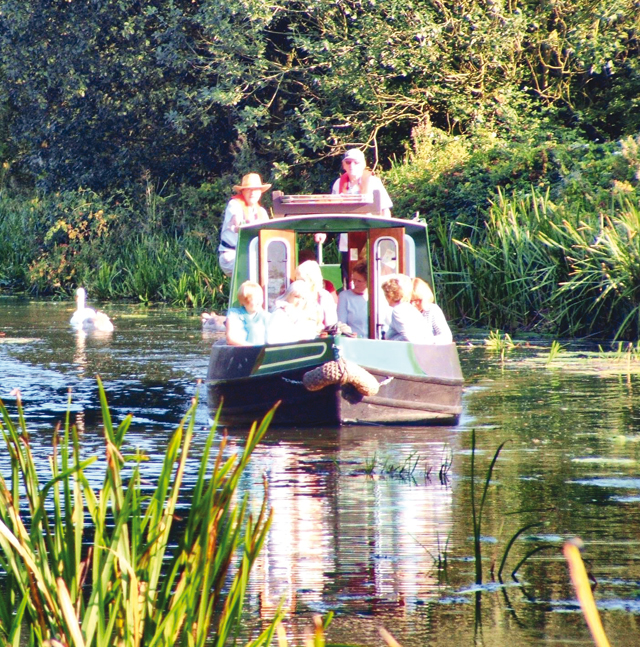 Many of the canals in England are surrounded by some of our finest scenery and it is a well-known fact that these waterways form the basis for some of the most idyllic and peaceful holidays.
Grantham Canal is certainly no exception, being thirty-three miles long and winding along the most stunning countryside through the Vale of Belvoir. With a chequered history reaching back as far as 1793 this jewel in our heritage has experienced varying status, from its prosperous commercial beginnings to its inevitable decline and latter day total disuse.

The initial concept was for a method of supplying coal at a cheaper price to the town of Grantham. The principal engineer was one William Jessop, who was surveying the Nottingham Canal at the time. In 1792, a bill was put before Parliament but it was defeated; apparently due to the coal merchants who were already supplying coal to Grantham by road. The suggested route was revised with the new canal junction at West Bridgeford and to include another 3.6 mile branch to Bingham. This second bill was put forward and it received the Royal Ascent in 1793. It authorised an initial sum of £75,000 to be raised for construction with an option to raise a further £30,000. The canal was completed and opened in 1797 but the section to Bingham was never built. The whole length of thirty-three miles utilised eighteen locks to lift the water level 140 feet from the Trent to Grantham with eleven of these situated on the first few miles above the Trent.

Profitability allowed for the repayment of substantial debts in 1804 and 1805, after which the shareholders received dividends on their shares. The canal’s income from tolls, together with other income peaked in the late 1830s and early 1840s. After the coming of the railways, decline was inevitable and with the line opened between Ambergate and Grantham, the canal owners sold their rights to the Ambergate, Nottingham, Boston and Eastern Junction Railway in 1845. The rail line was completed in 1850 but the railway company did not honour the agreement, resulting in long and protracted litigation and the eventual settling for lower figures. Through railway mergers, the canal was taken over by the Great Northern Railway in 1861 and later by the London and North Eastern Railway.

Grantham Canal became more and more neglected with traffic down to just 18,802 tonnes in 1905 and tolls amounting to a mere £242. There was no canal traffic at all after 1929 and in 1936, an Act of Parliament was passed to close it. This Act stipulated that the water level in the canal must be maintained at a depth of two feet, in order to supply local agricultural requirements. It ensured that the canal had water but it did not provide for the upkeep of the locks and infrastructure. This deteriorated rapidly and with the introduction of transport improvement schemes during the 1950s no less than forty-six of the sixty-nine bridges over the canal were lowered – creating a problem with the refurbishment projects going on today.

As with so many of our bygone industrial gems, the recognition of their present day worth, not merely as reminders of our historic past, but as essential preservation projects – in addition to being priceless environmental areas – is essential. Identifying the need for the preservation of the Grantham Canal was, however, only the beginning of the total operation. It was only after the British Waterways Board in 1970 tried to obtain an Act of Parliament aimed at its being allowed to cease maintaining the water levels of the canal that the whole question of abandonment broke loose. Eventually the Grantham Canal Society was formed and this body was responsible for the prevention of the canal being filled in. Together with the British Waterways, the Inland Waterways Association, and the Waterway Recovery Group, the Grantham Canal Society began the huge task of the restoration of this waterway back to navigation. It was to be a major undertaking and it is one that is still ongoing today.

The Grantham Canal Partnership was inaugurated in 1997 with the aim of moving the project forwards. The partnership consisted of British Waterways, the Inland Waterways Association, the Grantham Canal Restoration Society, representatives of the six local authorities through which the canal passes and the Grantham Navigation Association – a 1992 breakaway group from the Canal Society. The main outcome of this amalgamation was the formulation of a draft business plan for the canal by British Waterways. Over time, societies and associations come and go but the canal is presently owned by the Canal and River Trust – a government funded national body which is in itself a spin-off from British Waterways.

For most of the canal between the locks, restoration does not present any major logistical problems, but one of the biggest challenges will come with the end at Nottingham where it joined the Trent. Modern development and construction of the A52 has effectively ensured that an alternative route will have to be chosen. In 2009, three possible alternatives were identified and discussed. Similarly, at the Grantham end, the terminal basin has been filled in and an embankment carrying the A1 blocks the line of the waterway. A tunnel has been proposed as the solution in this particular case.

One of the larger problems to solve in 1992, after permission was granted, was the removal of an old railway embankment blocking the route of the canal near the top of the flight of locks at Woolsthorpe. After the fitting of new gates to the top three locks, and the rebuilding of Casthorpe Bridge by Lincolnshire County Council, 4.4 miles of the canal were opened for navigation. The restoration of a further 2.3 mile section further along between Hickling Basin and Hose was enabled by way of a derelict land grant amounting to £400,000 in 1993. The next part of the overall project is for the restoration of a section between Woolsthorpe and Muston containing four locks. After this there are plans to remove a bridge at Bardney. All this takes time – and a lot of money. The restoration project has recently been awarded a stage one grant from the Heritage Lottery Fund and the application is now in the pipeline for stage two. It is much-needed money, as anyone who has access to the cost of materials will readily point out. In the last ten years, £7 million has been spent and when one considers it costs around £30,000 to install a pair of new lock gates, it is not hard to understand what is needed by way of funding.

Currently driving the whole operation is The Grantham Canal Society, which is made up of a dedicated core of professionals prepared to volunteer their time and steer such a huge undertaking forward. The Society, which is also a registered charity (No 507337) also retains a group of skilled volunteers who are experienced in the various disciplines necessary to both complete tasks themselves and train others.

The restoration work provides a wealth of experience in many trades and offers valuable training, particularly for students and work experience candidates. All the equipment is provided by the Society, which then oversees the various tasks. Training may be in arboreal work on one occasion and bricklaying the next. Whatever the interest, getting involved with the canal restoration programme is a wonderful opportunity for so many people from all walks of life, irrespective of age.

The eventual restoration of this beautiful waterway, for the enjoyment of boating enthusiasts and walkers alike, will have some excellent side benefits for other groups too. Being a supreme and high quality rural expanse, it plays host to an abundance of wildlife. It is a natural, safe setting for the protection and conservation of many species of flora and fauna. There is one Site of Special Scientific Interest (SSSI) situated on the Leicestershire section of the canal. Anglers, too, are well catered for here with probably the most peaceful surroundings possible. Part of the National Cycling Route is also contained within the canal’s geography, as it plies its way between Bottesford and Grantham.

If proof was ever needed of the success of the overall restoration project, then one has to look no further than the narrowboat trips that are now in operation on the newly refurbished stretches of this beautiful canal. The Grantham Canal Society runs pleasure cruises on its boat ‘The Three Shires’ from Woolsthorpe landing stage, just above lock number eighteen. They last for up to two, four or five hours and can accommodate parties of up to a dozen. Light refreshments are available on board – you can even bring your own picnic. Perhaps stop off at a pub for a meal and return later! Personally, I couldn’t think of a nicer way to spend a summer afternoon. Hire fees and charges are displayed on the website or telephone the trip options number. Website www.granthamcanal.com, Telephone 01949 850999.