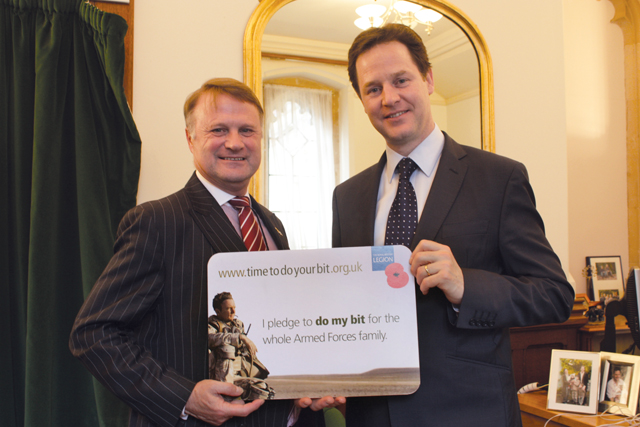 Fundraising year round to support the Armed Forces

With an annual income and expenditure exceeding more than £270 million and 1,300 staff under his leadership, no two days are ever the same for Royal British Legion director general, Chris Simpkins.
He took over the top job at the charity, which is best known for its work organising the annual Poppy Appeal, back in 2007 and is keen to highlight how its remit is far more wide-reaching than many people realise, while fundraising goes on all year round.

The Legion is the UK’s leading services charity – it has around 2,500 branches including ninety-two abroad, with more than 350,000 members – and has been providing practical care, advice and support to serving members of the Armed Forces, veterans of all ages and their families for more than ninety years. It receives no government money but relies on a massive network of volunteers to carry out its fundraising, which in turn enables it to deliver welfare services and other projects. It also actively campaigns with all the UK’s political parties to improve the lives of servicemen and woman past and present and their families.

Mr Simpkins, who has a UK and international public sector background spanning more than thirty-five years, said: “This is a massive organisation. Everyone relates us to Remembrance and around the Armistice and therefore the Poppy Appeal but our fundraising goes on throughout the year. It’s used to support the armed forces community – that’s around nine million people who can access us, which includes anyone who has served for seven days and their family.

“We spend £1.7 million every week on welfare services for the Armed Forces community. In addition to all that we actively campaign on their behalf too.”

Last year the Legion was instrumental in getting the Armed Forces Covenant enshrined in law. Mr Simpkins is thrilled with this success, explaining that it changes the way in which the Armed Forces are treated, by providing a broad set of principles about the lifelong duty of care the state owes to those who make the ultimate sacrifice for their country. The covenant means that Armed Forces personnel should not be disadvantaged as a result of their service when it comes to getting financial, educational and social support.

Now in its ninety-first year the challenges facing the Legion have changed dramatically since its creation by Lance Bombadier Tom Lister in May 1921, when four national organisations established following World War One were united together.

Mr Simpkins said the way in which the Legion supports our troops has had to adapt to meet demands – especially since those approaching it for support are increasingly much younger. This, coupled with medical advances means that people are surviving life-changing injuries they previously might not have, but will need support for the rest of their lives – perhaps the next sixty, seventy or even eighty years. He explained that in many of these cases no one really knows what kind of long-term impact their injuries are going to have and so more research and support are needed. In addition to this people are also generally living longer, which is leading to other issues such as dealing with dementia. The Legion has a number of its own homes which can care for sufferers and it also has several support projects to help them remain living on their own for longer.

Last year the Legion spent £20 million running care homes and break centres, which in turn gave 8,000 people a well-deserved rest and it is constantly investing in more.

Also in 2011 the Legion enabled 1,000 service leavers to set up their own businesses thanks to its Be the Boss scheme and a further 11,000 individuals received help from its Benefits and Money Advice Service, with the average beneficiary £3,100 better off as a result.

On top of that it funds a varied programme of groundbreaking research projects, while other schemes involve helping those who have lost limbs in conflict to live as full a life as possible and regain their physical abilities. Another recent initiative is the development of a free handyman service.

Looking to the future Mr Simpkins is overseeing a massive re-organisation, the biggest in the Legion’s history, while continuing to deliver and increase the day-to-day support it already provides. All this while it continues striving to safeguard the memory of those who gave their lives for our freedom through Remembrance education and events and organising the Poppy Appeal to remember those who have given their lives in service.

Speaking of his role, Mr Simpkins said: “It’s definitely not a nine-to-five job – no two days are the same.

“This is a vast and complex organisation providing a huge range of products and services. One afternoon I could find myself speaking at an event in the House of Commons promoting the needs of the Armed Forces community with the Prime Minister, while the next day I could be in the Ministry of Defence with ministers and officials or I could be attending a small branch meeting.

“The calls for our help are increasing year on year and that trend is going to continue as a result of the legacy of operational activity in the last ten to twelve years.

“The Legion is a fantastic organisation, doing great work – but it couldn’t do that without its huge network of volunteers who we rely on and the support of the public.”

Prior to taking up the director general role Mr Simpkins spent the previous four years as chief executive of the Falkland Islands Government and head of the Falkland Island Civil Service, during which time he led a modernisation and improvement programme. Before that he served as chief executive of South Holland District Council, based in Spalding, for fourteen years where he led the authority to Beacon Council status.

Active on health service and rural issues Mr Simpkins has also served as chairman of Stamford College of Further Education, director of Lincolnshire and Rutland Connexions and on the Rural Affairs Forum for England.

He lives near Spalding with his wife Denise and the couple have two grown up children, both living in Australia. Despite having lived overseas and working abroad and in the capital city, Mr Simpkins is always pleased to return to Lincolnshire, adding: “I always like to get back home to rural Lincolnshire – I love the tranquility.”

* For more information about the Royal British Legion and its work supporting our Armed Forces visit www.britishlegion.org.uk