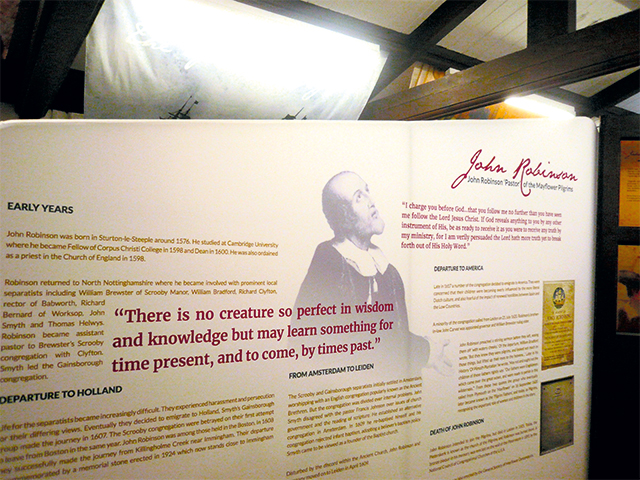 Stephen Wade continues his reports on the Mayflower Celebrations.
John Robinson is one of the most significant figures in the Mayflower Pilgrims story. This year his name will be at the heart of celebrations in Gainsborough, and his place not only in the 1620 events but in the later developments of worship in the town will be centre stage. A new exhibition will add to the work already done by the Old Hall.

This special attention is largely owing to the work of the Revd Dr Gillian Poucher, Minister of the United Reformed Church in Gainsborough, who has written a booklet on Robinson’s part in the epic tale of the separatists and their strivings to worship their God in their own way. The church has a special exhibition, organised by Createinn, and the booklet recalls the story of both Robinson and John Smyth; the latter’s Gainsborough group made their journey to Holland in 1608, heading first for Killingholme Creek.

With the help of Susan Bee, the church secretary, Dr Poucher has done her best to make sure that the celebrations are noticed. Heritage Mornings are planned between February and November this year, being held between 10am-11.30am; then there will be coffee mornings on Tuesdays and Saturdays, at 9.30am-12noon and 10am-12noon respectively.

John Robinson never made the main voyage across the Atlantic. He died in Leiden in 1625, and today the church in that town, the Pieterskerk, is known as the church of the Pilgrim Fathers. Robinson is remembered in Leiden, with his name on a plaque, erected in 1891 by the National Council of Congregational Churches of the USA.

But there is also, in the exhibition and in the booklet, plenty of attention given to the later development of church life in the town, long after 1620. Separatism generally played a prominent part in the story of Gainsborough; the old adage that ‘as sure as God’s in Lincolnshire…’ may well be applied to the town, and this is confirmed by Dr Poucher’s reminder that in the eighteenth century one group of worshippers used a room in the Old Hall – later they found more stability when they acquired John Dean’s yard on The Causeway (Bridge Street today) to establish their own chapel.

At the centre of the commemorations, though, is the charismatic figure of John Robinson, and the plaque in Pieterskerk explains his significance in a nutshell: ‘Pastor of the English church in Leiden… his broadly tolerant mind guided and developed the religious life of the pilgrims of the Mayflower.’

The exhibition within the church is attractive and impressive, and I encourage readers to pay it a visit. Once again, the county is doing admirable work in helping the public to understand the importance of the Mayflower Pilgrims, and I intend to write again later in the year, when all the work has come together and responses have been given.