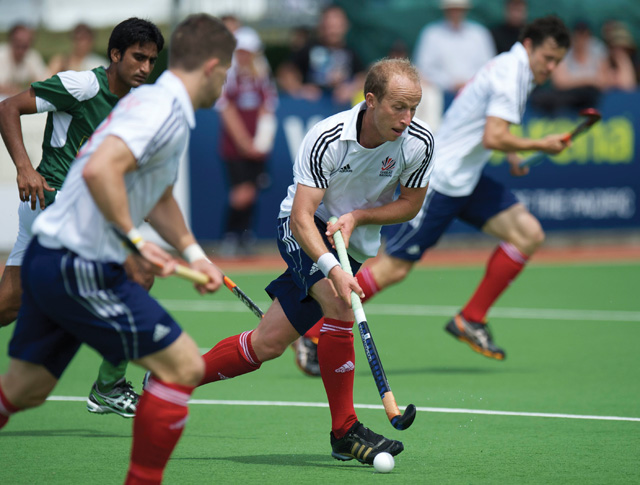 Game for a medal

An Olympic medal can change the lives of those lucky enough to be caught up in the fierce glare of success.
For a few fleeting moments, the athletes who create the thrilling spectacle of sporting competition will be somehow less mortal than before.

Many, though, remain thankful for a little anonymity.

“I don’t envy a footballer being mobbed every time they walk down the street,” said Team GB hockey player Glenn Kirkham, as he surveyed the sprawling, technicolour magnificence of London’s Olympic Park during a break in training. “I can walk down the street without anybody recognising me. It’s definitely one of the benefits of being in a lower-profile sport.”

Now the relative veteran of over 200 international caps for England and Great Britain, and likely to be a key player this summer, Kirkham himself had to choose between hockey and football during his teens as a member of the Scunthorpe United youth team.

“I don’t particularly have any regrets – except maybe when I see the footballers driving around in their cars! The fact that I’ve been able to play at the top level of my sport for so long, I couldn’t have asked for any more really.”

The twenty-nine-year-old from Grimsby, an international of ten years’ standing, may finally experience the rarefied atmosphere of celebrity should the team continue the progress enjoyed throughout that past decade.

“Obviously we have to perform to our best, but we’ve got a bit more history behind us,” he said, buoyed by the confidence of a bronze medal in May’s Olympic test event, winning the 2009 European Championships and a fifth-place finish in Beijing in 2008. “It’s been a journey for a lot of us, together; we all got into the squad in our early twenties, started off ranked eleventh in the world, and hopefully London will be the pinnacle. This time around we think we have a game that is good enough to get into the medal playoffs.”

Even after four years of hard work, Olympic medals can be won and lost in a split second, but Kirkham is secure in the knowledge that nothing more could have been done to ensure that they produce the right performance when it matters.

“The increase in National Lottery funding has enabled us to be the best-prepared that any British side has ever been. No matter what the outcome at the Games, there has been no stone left unturned in our preparations. Now it’s all down to how we perform for those two weeks.

“You can’t expect to be in the best physical condition every tournament, and we tend to look to peak for one major tournament every year. Over the last three or four years, when we have felt at our peak we have usually competed at the top level.”

With a team spirit he describes as more akin to a club side, and totally devoid of any potentially divisive cliques, the challenge is to channel the fervour of the nation to positive effect.

“It’s a great venue and the way it’s nestled in the middle of the Olympic Village makes it pretty special,” he said of the 16,000-capacity Riverbank Stadium. “A lot of people have started talking of the pressure of a home tournament, but I definitely think it will be the positives we take out of it. We tend to play our best hockey when the pressure is really on and there’s a great atmosphere. That really pushes you on as a player. I don’t think there are going to be any negatives about playing a home tournament.”

The surge in interest has already attracted new fans to the sport – and helped to create that exhilarating atmosphere. “The Olympic test event had a different kind of atmosphere to a normal hockey crowd. They tend to be very quiet in their approach, studying the game, but this was a bit more like a football crowd. It was brilliant.”

For the past twenty years, every British national hockey side has lived in the imposing shadow of the gold medal-winning team from Seoul 1988. To many people, the names of Sean Kerly, Imran Sherwani and Ian Taylor – key members of the squad which also won bronze in 1984 – remain virtually the sum total of their hockey knowledge.

“They are still our inspiration,” admitted Kirkham. “Until a team does better than them at an Olympic Games, we’ll all be compared to them. Hopefully we can create a few more household names in hockey, but that 1988 team is obviously something we aspire to. They’re the inspiration behind a lot of the players in the squad.”

The game has developed apace in those intervening years, and so much so that even a midfield lynchpin such as Kirkham has had to move with the times and develop his own skills.

“I’m definitely not at the front of the fitness tests, or anything like that,” he said wryly. “I’ve had to adapt, otherwise I’d have been left behind. My game has had to improve the whole time, whether it be physically or technically or tactically. It’s never ‘job done’, there’s always something to improve and work on.”

Having begun as a defensive midfielder, the increase in pace and athleticism has necessitated greater mobility and attacking threat from every position. “A lot of the time, the strongest and the fittest get to survive, basically. There’s so little respite in the game,” he said. But, for all the hard work required to retain his own place in the team, he recognises how this can benefit the sport.

“The game has quickened up so much. I think the sport as a whole will be shown at its best at this Olympics. It’s such a dynamic sport, I think this really could be a turning point, especially if we have some home success.

“Every minor sport is competing for extra column inches in the press and there is that interest if you do have success – but it is the success part which is key. I think this time around the sport as a whole in this country is a lot more ready. There are a lot more initiatives from GB Hockey to try to make that interest continue rather than be a flash in the pan, when two months after it’s finished everyone goes back to football.”

An Olympic triumph would inevitably filter through to the grassroots of the game and provide a welcome boost for clubs such as Grimsby, who have enjoyed another glorious, title-winning year after almost folding in 2006 due to a lack of players.

“I genuinely think the opportunities are there,” Kirkham said, “and there’s a lot more promotion of the sport over the whole country. If we get some success this summer that will spur people on to take up the game.”