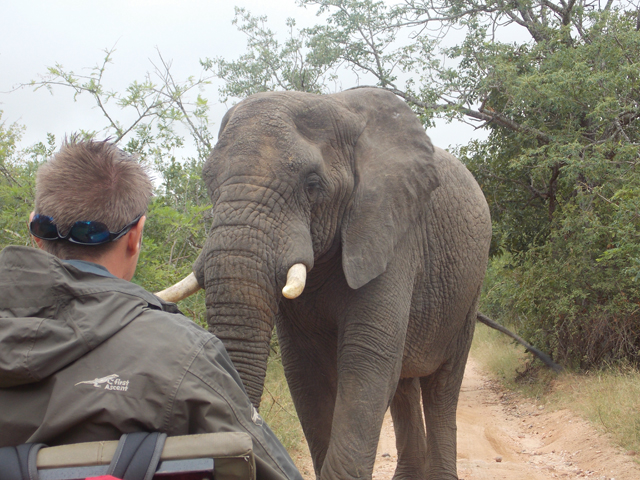 Game to live out a dream

The overwhelming call of the wild has led one Lincolnshire man to swap the county’s flatlands for the remote plains of South Africa, where he is living out his dream by training to become a professional field guide.
Jamie Featherstone, from Sutton Bridge, set off on his wild adventure in January and is spending a year in the bush – with six months’ training at three reserves and, if he gains his level 1 FGASA qualifications, a lodge placement for the following five months.

Living in an unfenced camp on a big five – that’s lion, elephant, rhino, leopard and buffalo – game reserve, Jamie has been learning how to walk in dangerous game country armed with just a rifle, so he can view the creatures on foot as well as studying all aspects of the area’s geology, ecology, weather, astronomy and cultural heritage.

A self-employed bricklayer by trade, twenty-seven-year-old Jamie decided to try for his professional qualifications after volunteering on a reserve in 2012.

“I went out there originally because I wanted something different for a bit,” said Jamie.

“I’ve always been interested in African animals and always wanted to work with them – and volunteering on a reserve presented me with a perfect opportunity.

“After I came home I kept wondering if I could ever make it as a field guide in Africa. I didn’t want to regret not giving it a go in a few years’ time when it was too late, so I decided to just go for it.

“After all, you never know whether you can do something if you don’t give it a go.”

Jamie applied for his yearlong Eco-Training course online, which will also see him study tracks and signs, first aid, bush medicine and basic birding, plus aspects of public speaking and how to provide an enjoyable guided experience in a natural environment.

The training is carried out on three different reserves – Selati and Karongwe, which are based in the Limpopo Provence near the Kruger National Park, and Mashatu on the Limpopo River in Botswana.

“An average day is, wake up at 4.30am and head out on a game drive, where we learn about the things you see in the bush, how to interpret animal behaviour and how to guide. We get back for breakfast at around 9am,” explained Jamie.

“This is followed by a two-hour lecture, and then self-studies, or a bit of downtime until lunch.

“An hour later we head out on another game drive to practice more skills and get back to the camp about 8pm. Dinner is usually a braai (barbecue) on an open fire before heading off to bed.

“Sometimes we sleep under the stars in a dry river bed with just a fire for warmth – we have to take it in turns to stay awake, so we can make sure nothing comes along to eat us.”

Visitors to the camp are not uncommon – including elephants, who wandered in one day while the students were working.

“Hyenas come into the camp most nights,” said Jamie. “We see tracks belonging to them and hippos going through most mornings. I’ve found hyena tracks outside my tent, and you could see where they had been stood to look in through the mosquito net.

“We can hear the lions and hyenas calling most nights, and the hippos in the early morning too.”

“We’ve had a lot during the last few weeks,” he said. “We had flash floods the other night at around 2am and had to evacuate the camp as we were on the banks of the Karongwe River.

“We all moved up to higher ground; fortunately no-one’s tent got washed away.

“The warm weather has certainly taken a bit of getting used to, having come from an English winter – I got a lot of sunburn initially.”

The weather is not the only thing Jamie has had to acclimatise to – staying in such a remote area also means he has to forego some of life’s creature comforts.

“We sleep in two-man tents and we do have a bed, so we don’t have to sleep on the floor. But there is no electricity, no phone and no internet signal; I quite like going back to basics though,” he said.

“We have running water, but the hot can be a bit hit and miss. The first fifty-five days were the worst as we didn’t get any time off and not a lot of time to ourselves – it’s all about studying and getting our qualifications. The second part of the course, up until you get your lodge placement is a bit more relaxed.

“When we do get time off we play volleyball, ultimate frisbee, or tag rugby – we try and play games so that everyone can join in.”

Jamie is unsure what the future holds once his year is up, but one thing’s for certain: he’s having the time of his life.

He said: “I miss my family and friends, Sunday roast dinners and a good pint of English ale but there have been so many highlights already, it’s impossible to choose.

“From the stories my instructors share with us, to laying in bed listening to the hyenas outside, to a big bull elephant coming up to me…

“I’ve seen cheetah cubs, watched a leopard kill a warthog, and the sunsets are amazing – the night sky is vast, you can see the whole Milky Way.

“There are all the animals you can possibly think of and lots of different types of vegetation and more birds than you could ever know. It’s just all been amazing.”

Good luck Jamie – as you say yourself, you really never know if something is possible unless you give it a go.