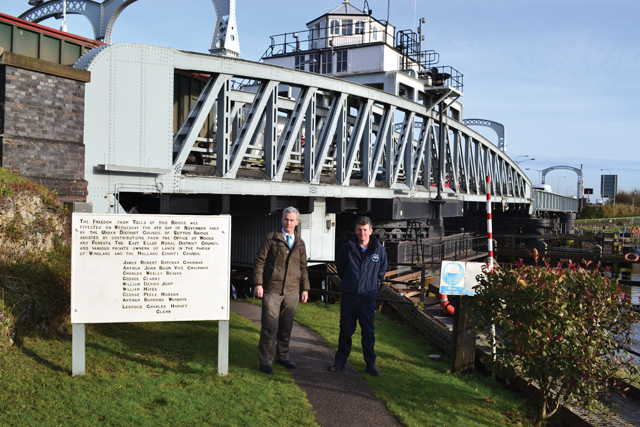 Gateway to the county

It’s an iconic landmark used by thousands of motorists every day, but few realise what a magnificent feat of Victorian engineering the Cross Keys Swing Bridge actually is.
Nestled at the gateway to Lincolnshire, on the border with Norfolk, the mammoth structure straddles the tidal River Nene at Sutton Bridge and is the reason the village is so named.

The 800-tonne bridge, which swings open via electrically powered oil hydraulics to enable river traffic to navigate up to the port at Wisbech, is overseen by a team of four men, who are on call twenty-four hours a day, seven days a week.

The role of bridge keeper is a fascinating one, with job specifications including the ability to work at heights and over water; it is their responsibility to make sure the bridge is properly maintained and ready to open. They must also reside within a ten-mile radius of the Cross Keys so they can respond quickly in an emergency situation.

“I’ve always liked mechanical things,” said Pete, who kindly took me on a guided tour of the bridge and its workings.

“It’s amazing how this all works. It’s one of the few remaining operational swing bridges of its kind, and is in remarkably good condition considering its age. It does have a very similar ‘sister’ bridge in Newcastle.

“As bridge supervisor I support the other operators, overseeing routine works and watching over any repairs – liaising with contractors and the ports. As the local point of call, I’ve got overall responsibility for it. It’s quite a big thing as, on average, the bridge opens up once a day – although sometimes it can be as many as four times.”

Despite its age – the Cross Keys was built in 1897 for the Midland and Great Northern Joint Railway Company at a cost of £80,000 – the giant structure opens effortlessly under the control of its custodians, who tell me the cost of replacing it could be anywhere up to £20m.

The Cross Keys Bridge first opened on 18th July 1897, when it was originally designed as a road and rail hydraulic swing bridge, taking road traffic on the northern side and trains on the southern.

Made of steel, iron and wood, it was built by A Handyside & Co, of Derby, and is topped by a wooden podium supporting a hexagonal wooden and glazed control room, which still contains the original control levers and historic machinery that used to power the giant turntable that moves the bridge.

“It’s a very unique and unusual job looking after the bridge,” added county council consultancy services manager, John Monk. “On the one hand it’s fascinating working with such an old piece of engineering. That’s what makes it so appealing – even with a ten-mile restriction on where the bridge keepers live, so many people are interested in working with this local landmark. Although due to the anti-social shift pattern, it can also be very lonely as they’re often working on their own.”

From the moment the barriers go down to stop traffic crossing the bridge it takes between ten and twenty minutes for river traffic to pass through, depending on its size.

John explains the bridge was originally powered by water hydraulics. The pressure was stored using accumulators located in the wooden tower, attached to the brick pump house in the nearby old railway yard. Much of this impressive machinery still works and can be seen through a small hatch in the turret floor.

Towards the end of the nineteenth century up to eighty trains were crossing the bridge each day, while it was opened for shipping as many as five times daily. However, the railway line closed on 28th February 1959, and was later dismantled leaving the bridge carrying the A17 road linking Lincolnshire to Norfolk.

The structure was heavily refurbished between 1987 and 1991, before Pete took up his post. The way the bridge opens changed from clockwise to counterclockwise, due to 100 years of wear on the gear teeth, and to prevent the newly fitted cantilever footpath from narrowing the 22m (72ft) shipping channel.

The operating system was also converted to electrically powered oil hydraulics, working through a computer program with the equipment located in a new pump house hung beneath the bridge; although the old original levers still can do the job if need be.

This also meant the old hydraulic engine house across the road also became defunct. The two were linked underground, but today the house forms part of a private dwelling.

More recently the Cross Keys has made its screen debut, appearing as a backdrop in the 2007 film The Golden Compass, starring Nicole Kidman and Daniel Craig, adapted from Philip Pullman’s fantasy trilogy His Dark Materials.

VITAL CROSSING
The Cross Keys is the third bridge to cross the River Nene at this point, the first being designed in 1831 by Sir John Rennie. Made of oak, it had a movable iron span, which divided in the middle and opened upwards to allow sailing ships to pass beneath.

The bridge was replaced in 1850, following improvements to the River Nene below Wisbech. Located 100 feet south of the original, the new river crossing was designed by Robert Stephenson and was made of cast and wrought iron, while the roads on either side had to be diverted to accommodate it. Both bridges were built for road use only. The railway arrived at Sutton Bridge from Spalding in 1862 and from 1st March 1866 both road and rail used the same carriageway when the line was extended to King’s Lynn.