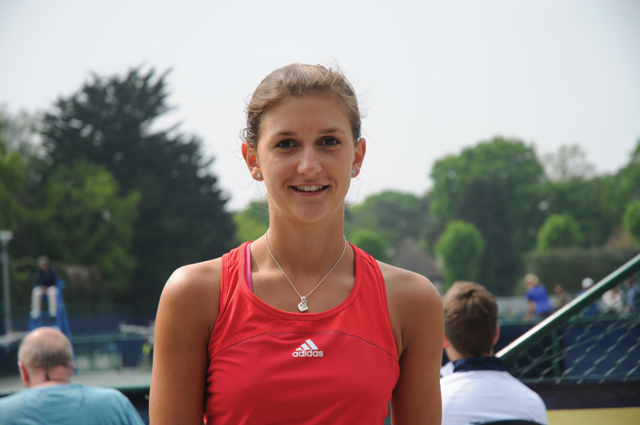 Gem of the court

After arriving in the top sixteen tennis players in Britain, Lincolnshire’s Jade Windley fancies a crack at Wimbledon.
It’s that time again! Strawberries and cream, rain delays, John McEnroe and Murray Mountain….. Sorry Henman Hill (could it ever be anything else). That’s right The Lawn Tennis Association (LTA) is just a few weeks away from opening the doors to Wimbledon 2011 and the country will once again pin their hopes on one man keeping the silver gilt trophy in Britain this year. As far as women’s tennis goes, Wimbledon hasn’t seen a victory on home soil since 1977, when Virginia Wade became the nation’s sweetheart.

However, from the depths of Lincolnshire a diamond has emerged from the rough, or rather a jade has emerged. Jade Windley is one of the bright young gems to come from the LTA’s push to produce players better equipped to compete on the world stage. The twenty-one-year-old has already competed against some of the top players in the world. Petra Kvitova, who made the Wimbledon semi-final last year and Yanina Wickmayer, who made the US Open semi’s in 2009 are two opponents who stand out for Jade. She also rated the talented Briton, Laura Robson, who has already made her mark on the tennis world at the age of just seventeen.

Jade is currently ranked in the top sixteen female players in Great Britain and with only six of her competitors above her at a younger age she has time to improve and move up the rankings. However, having turned twenty-one in April, the next few years will be crucial in her development. Caroline Wozniacki, currently the best player in the world, is three months Jade’s junior and reached the US Open Final in 2009, having just turned nineteen. Slightly harsh comparisons perhaps, but as Jade wants to reach the top then these are the standards to which she will be judged.

The jade gemstone is known for its toughness and durability, adjectives you might use to describe the twenty-one-year-old tennis star. Having grown up in the relatively humble surroundings of Woodhall Spa she has had to work harder than most to find success in the sport. After finishing her A-Levels at Queen Elizabeth Grammar School in Horncastle, Jade moved to Sussex where she now trains at the Esporta Brighton High Performance Centre, which has some of the best facilities in the country. As one of the nineteen LTA High Performance Centres, the training base offers access to the best tennis facilities, coaching and fitness programmes to meet the needs of the modern day player.

The local press have been following Jade’s career for a while and she is comfortable with the media attention, speaking eloquently, honestly and with personality, a tribute not always applicable to sports people. There is a huge amount of admiration for the stars that can charm the television audience and Jade will definitely have no problem with this if she reaches the top of her game. To be a successful tennis player from Lincolnshire takes a drive and determination that goes beyond the boundaries of the sport. As Jade was growing up she shared the limelight with Dan Cox, currently ranked number three in Britain. Together they fly the Lincolnshire flag in professional tennis but it was not easy for them. Training facilities and competitions are not at the same standard in our county and Jade had to work harder and travel further than many of her peers.

“I guess we’re out of the way in Lincolnshire. I had a good coach growing up, David Williams, and I was lucky to have a few connections, and I did a lot of travelling from a young age and that introduced me to more people, including my current coach,” Jade explained.

Jade trains about three to four hours a day, with just one rest day per week. Her schedule means training’s the same most days unless she is away, playing from 8am until 10am and then 1pm until 3pm in the afternoon and there’s usually an hour of fitness on top of that. She has one individual tennis coach, Guy Galpin, who she’s been with for quite a few years and at Esporta they have fitness trainers and physios as well. “My diet is slightly different to other people because I’m really trying to put on weight and muscle mass, so I have to eat over 3,000 calories every day and that mainly consists of meat, rice and veg,” Jade added.

Alongside her attempts to ‘bulk up’ Jade has had to deal with a back injury that limited her playing time at the latter end of 2010. Although much improved now, it got in the way of her progress at a crucial time in her career. Jade now has a new physio who has helped to ease the pain and keep it in a manageable state.

A major part of a tennis player’s life is travelling, and spending long periods of time away from her home, family and friends can be hard for Jade. But she enjoys visiting places she would never get to see if she wasn’t a professional tennis player. Her favourite places to play are Australia and Florida, which perhaps has something to do with the weather.

“It’s good, you get to see different parts of the world but it is quite lonely. I do a lot of travelling on my own and I guess it can be a bit boring at times. I do miss home sometimes, it’s nice to come back to Lincolnshire and see my family and friends. I got quite ill when I went to India for the Junior Commonwealth Games in 2008; it was nice to see it though. Overall I love the travelling. If I wasn’t playing tennis I don’t know what I’d be doing, probably at university like some of my friends from school.”

Jade admits she doesn’t have much spare time but when she does get off the court she enjoys the normal side of life, going to the cinema and shopping with friends. She tells me she is a ‘massive’ Leeds United fan, although to avoid outrage from readers we’ll keep that quiet. Brighton has quickly become home for Jade despite being a world away from Lincolnshire.

“Brighton’s completely different, I absolutely love it, it’s a nice change now I’m older, it’s busier and very lively. It’s nice being by the sea and the training environment is good, good group of coaches and a good group of players that I guess you probably wouldn’t get in Lincolnshire because there’s not that many players from there.”

The difficulty for professional sportspeople to build friendships is not one felt by Jade, who, despite the competitive nature of tennis, has made some good friends in the south-east. “The majority of my friends are from the tennis world, because that’s who I work and train with and see all the time. I have a few players who I know I’ll be friends with whether I win or lose but there are a few foreign girls who won’t talk to you if you beat them.”

The year started off in exceptional fashion for Jade, making the final of the Wrexham 10K only to go out to her former doubles partner Anna Fitzpatrick in three sets. Since then she has competed in tournaments across Britain and in Turkey, where she made the semi-final of the $10,000 events in Antalya and Bournemouth in April. With the summer now in full swing, Wimbledon is on Jade’s mind and the difficult task of qualifying for the tournament. Competing at Wimbledon as a junior gave her an impression of what it is like to play at the greatest tennis arena in the world, but nothing compares to the prospect of a place in the draw for the professional championship. Last year Jade played in the doubles qualifiers with Fitzpatrick, losing in three sets to Jill Craybas (UAS) and Marina Erakovic (NZ), who were ranked in the top 100 doubles pairs. Despite the loss Jade took a lot away from the match, enjoying the experience and building a greater hunger for success this year.

“There’s the wildcard playoff which gets you through to the qualifiers so in total you play six matches. The playoff’s are just British people so that’s not as tough, but once you get through to the qualifiers it’s the top 250 players in the world, but I fancy a crack at it! Playing at Wimbledon is my ultimate aim, it would mean the world, and hopefully, whether it’s singles or doubles I’ll be playing there one day.”