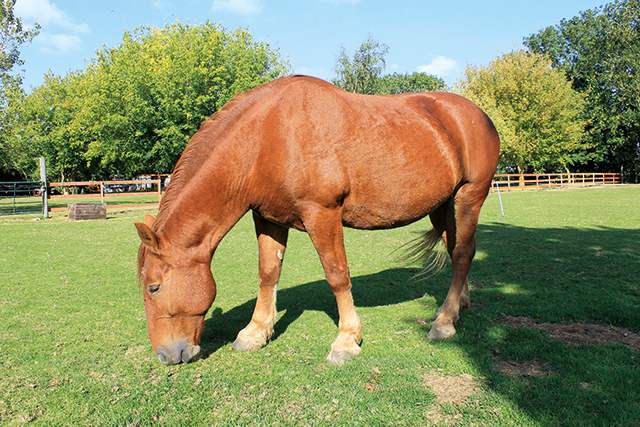 Get hands-on to help big breeds

Volunteers at Northcote Heavy Horse Centre have been providing a forever home for big horse breeds for more than 25 years. Kate Chapman paid them a visit to find out more about caring for these gentle giants.
Set up by Keith and Ruth Sanders back in 1988, the centre specialises in horse welfare and aims to provide somewhere the working breeds who pulled ploughs and drays in times gone by – such as Shires, Percherons, the rare Suffolk Punch, Clydesdales and Belgian Trekpaards – can see out their days, living the best life they possibly can.

Relying purely on donations, it is the only centre to offer a hands-on experience with the animals. It is run by volunteers in Spilsby, who struggle to raise more than £54,000 each year to provide food, shelter and warmth for the animals in their care, not to mention paying vet bills, admin costs and maintenance and repair work.

To bolster donations they hold a variety of fundraising events including medieval banquets and fetes and take some of their horses to outside shows to demonstrate them at work.

“With the heavy horses, a lot of them come to the centre through circumstances – their owners fall ill and cannot look after them anymore, or other sanctuaries turn them down because of their age or the ongoing cost to treat an existing medical condition,” explains volunteer Maria Cuthbert.

“There are lots of reasons we are asked to take a horse on really, others have been abused, are injured or disabled and can no longer work – but we don’t re-home them, they stay with us for life.

“They really are gentle giants. People come along, sometimes perhaps not too interested, thinking that they are just animals, but then they see the sheer size of them; they are tall, broad and strong and our visitors do hands on work with them.

“They follow a programme, they groom and lead them, help harness them; we really get our visitors involved and when we start doing that, they see how co-operative the horses are, how they are paying attention and that really amazes people.”

The Sanders were keen carriage drivers and kept their own horses prior to setting up the sanctuary, coming up with the idea when a contact asked if they would re-home a Shire horse at their yard.

“People from the local community used to ask if they could come and see him, so Keith and Ruth asked for a donation towards his food and they could come and spend as much time with him as they liked, and it just went from there really,” explains Maria, who lives in Essex but regularly makes the long journey to Lincolnshire to volunteer.

“They were contacted by other people about taking on their horses and Keith came up with the idea of re-homing different breeds of heavy horses, which people could come and see.

“The sanctuary is on the site of an old Women’s Auxiliary Air Force base, where the old shower block has been turned into some of the stables.

“It was never set up as a big business, but people in the local community came to see the animals and it just grew from there, as more people asked if it could take on their horse too.

“Over the years the centre has positively established the fact that the horses love to work. They benefit by being needed. Working within their individual capabilities they have an increased sense of well-being and contributing to the general need.”

Northcotes can look after a maximum of fifteen horses, depending on their size and currently has twelve in its care, as well as a few smaller ponies, four birds of prey and some alpacas. Among its current residents are Moose, a Belgian Trekpaard who has chronic progressive lymphedema and a heart murmur; a Percheron called Bosun, who at 17.3 hands is the centre’s chief worker; Suffolk Punch Rosie, who is a rare breed and Bonnie, a 48-year-old Shetland pony who has been there many years after her owner abandoned her.

It was also home to the biggest horse in the world for a time, Goliath, whose size saw him make it into the Guinness World Records at 19.2½ hands before his death in 2002.

“He was a big favourite,” adds Maria, “and a big draw for the centre. He was put to work too young and his joints did not develop properly. He fell over a lot and had a lot of cuts on his hips, we had to have a special crane made to help him get back up.”

Everyone at the centre gives up their time for free, including full-time manager Terena Bolam, who took over after Keith and Ruth retired to France six years ago. Maria says this year has been tough for the team as it continually tries to raise the required funds to meet its bills.

“It really has been dire this year; we’ve been living hand to mouth. It costs us around £150 per day, on average, although that does depend on the health of each animal,” she says.

“That £150 covers basics such food, shelter, medications, running the centre, heating, bills, electricity, and administration costs and then whatever is left goes on stable repairs, maintenance and making the place look nicer.

“Some of the really big horses are so large they have to have their shoes specially made – they are around £50 each, whereas the smaller ones tend to be £25 to £30. All these costs add up.

“Wendy, one of the Shires has a growth in her eye and we had to raise £800 for her to have an operation – we managed to do it in three days with Just Giving and she was able to have her treatment, which was brilliant.

“But we’re always looking for more help and more volunteers – they don’t have to like horses either, as there are other roles and things that need doing such as mechanical work, maintenance, building work and repairs to make. There are lots of different opportunities.”

The centre has a Wish List on Amazon so supporters can donate specific items and has a variety of events planned including medieval tournaments in May and August.

A summer fete will take place in June, along with a Christmas show in December and Maria says the horses are also available to hire for demonstrations at outside events, while the centre itself is open to visitors from May to September on specific dates.

“Whatever happens the horses come first, we just want to give them the best life we possibly can,” says Maria. “If anyone is able to help us do that it would be fantastic.”

For more information about Northcote Horses and Animals, its opening hours and about donating or volunteering visit www.northcotehorses.com