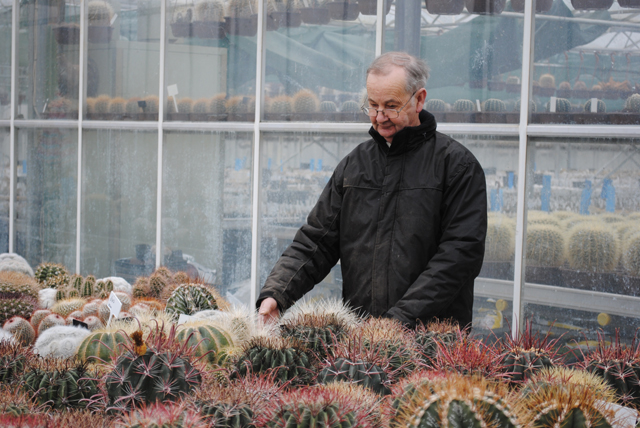 Getting creative with cacti

Lincolnshire’s rich, fertile soils are a far cry from the dry, arid deserts of the Wild West typically regarded as the home of cacti.
But that hasn’t stopped Bryan and Linda Goodey establishing Southfield Nurseries – the country’s biggest cactus nursery, in Morton, near Bourne, which thanks to their passion and dedication to creating spectacular new hybrids, is now home to more than 800 varieties.

The couple returned from showing their vast range of plants at this year’s Royal Horticultural Society (RHS) centenary Chelsea Flower Show with their twenty-fifth gold award.

“It was something we really wanted to do,” said Linda. “Especially with it being Chelsea’s centenary year – we’re thrilled to be able to celebrate both at the same time.

“But even after twenty-four golds, you can’t take it for granted. You have some idea of what kind of display you will put on, but it all comes down to the judges’ opinions on the day, and so much of it comes down to the weather too.

“Chelsea is really for the public; a lot of people are not used to seeing lots of cacti, other than one or two stuck in the corner of a room. They can be very pretty, so we like to include as much colour as we can in the displays and really showcase our plants.”

Bryan’s fascination with cacti began at a young age, when as a boy he attended the Lincolnshire Agricultural Show with his father, who gave him one of the plants, while Linda has grown to love them since meeting her husband.

“I still have that original plant my father gave me, a Ferocactus, called Fred, almost fifty years later,” said Bryan.

“Initially it was the spines on the plants that attracted me; there were huge variations from microscopic spines to spikes over twenty centimetres long.

“Now I’m intrigued by the flowers on the cacti – the wide range of colours and sizes and variations in markings.

“Cacti have been my hobby for a long time and I have been growing them commercially for over thirty years. I’ve also been hybridising Rebutia, Echinopsis and Lobivia varieties to increase their flowering times and produce interesting colour variations, with some very successful results.

“The flowers that we have developed have amazing qualities and are just so striking to look at. It’s a long process and can take many years. I’m just driven to see what flower I can create next.”

Two new varieties were created for Chelsea, although hybridising, as Linda explained, is not a quick process – it can take up to a decade for a new variety to be perfected.

“We cross different varieties together, so we can try and get them to flower more freely. It also gives us better combinations but it all happens very slowly,” said Linda.

Bryan initially set up his business as a nursery in Holton-Le-Clay, near Grimsby, and grew a much wider range of plants for the house, rather than focusing purely on cacti as he does now.

As time progressed he switched his focus purely to the spiky plants, and around twenty years ago made the conscious decision to relocate his family to Morton.

“By this time we were exhibiting at more flower shows up and down the country, and it was really a strategic decision to have more of a central location,” explained Bryan.

The Goodeys’ list of accolades is impressive too; as well as winning their twenty-fifth consecutive Chelsea gold this year, they are also the proud owners of more than 160 RHS gold medals for their displays.

And in February 2012 Bryan was presented with the RHS Lawrence Award for the best floral display at any of the RHS flower shows from March 2011, for his display at the Malvern Spring Flower Show (May 2011).

“May is a particularly good time of year for the cacti, as many of them are beginning to flower,” explained Bryan.

But all these honours would not be possible without the dedication of the Southfields team, which also includes Bryan and Linda’s daughter Eleanor, who runs the website and looks after customer services.

Setting up a display for a show like Chelsea takes the Goodeys up to three weeks, and involves creating displays at home, before transferring them to the venue, where in the case of Chelsea they have to man the show site for twelve hours a day for the whole week.

As for the popularity of cacti as a household plant, Linda says it has been fairly steady over the years.

“A lot of people have conservatories now, and that has made a difference, as these are too hot for a lot of normal house plants, but for cacti they are ideal.

“And in a lot of cases, people want bigger plants, rather than small ones, so they can take centre stage and make a statement.

“Depending on variety, cacti can easily last for twenty or thirty years. Some of the much bigger ones can last for up to 400 years.

“A lot of people say they do not flower out in the desert, but they are indoor plants here, and if they’re looked after and watered regularly they should do well.

“We always tell people to put them in a good position like a windowsill – all ours are in glass houses here – and water them once a week to every ten days, and don’t let them sit in water.

“They also need to be kept dry in winter.”

* Southfields Nurseries, Bourne Road, Morton, is open to visitors from February to the end of October 10am to 12.15pm and 1.15pm to 4pm and in November, December and January by appointment only.

You can also visit the nursery’s online shop at www.cactusland.co.uk