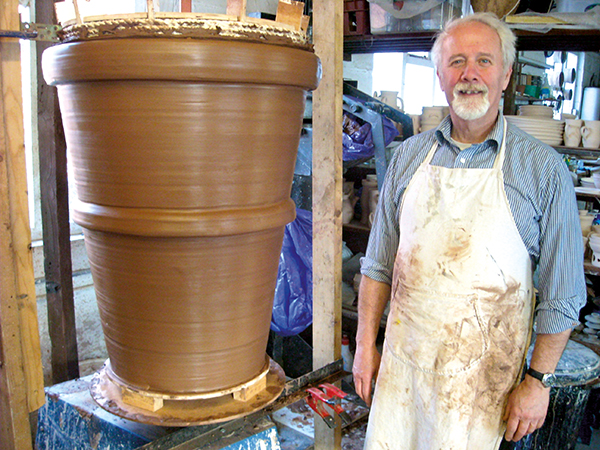 Getting creative with clay

Alford Pottery has a series of events planned over the summer including a French Pottery Day on 14th August (French National day) with French live jazz music by Pat McCarthy and John Le Voi, “two of the best musicians in the region”, along with food. There will also be a weekend dedicated to vegan food and appropriate pots for preparation and serving.
Alford Pottery is open Monday to Friday from 9am to 5pm, although visitors are advised to check before travelling.

Michel and Heather Ducos, the artistic duo behind Alford Pottery, home of unique stoneware designs, discuss the background leading up to the pottery’s 50th anniversary this year with Barbara Young.

With a distinctive design and unmistakable creative flair evident throughout its collection, the unique and timeless creations from Alford Pottery have long stood the test of time and over the years have built up an eclectic customer base worldwide.

Established in 1972 by husband and wife team Michel and Heather Ducos, this creative and inventive couple have combined their passion for all things pottery, with a shared and genuine love and dedication for their range of exceptional stoneware created in their workshop in Alford’s Commercial Road.

Over the years, Heather and Michel have supplied shops, galleries, restaurants and private buyers around Britain, as well as many countries from Finland to Australia and Europe to the United States, with dinner services and a selection of distinctive tableware.

“Our pottery has always been centred on food, kitchen and table, with a few lines of giftware for local holiday visitors,” explains Michel, who was born in Algeria, where he lived until the end of the Algerian independence war in 1962.

As a child he recalls using lumps of plaster from the walls of bombed out houses to carve into all sorts of shapes.

“I was always creative and making things but my first contact with clay and pottery was during holiday camps in France when I was about nine years old.”

Heather also enjoyed playing with clay as a child, especially while on family holidays in Devon, where she was attracted by the clay found on the riverside which she used to make her first

Having trained as an occupational therapist, Heather learned the rudiments of pottery, and later set up ceramic workshops in hospitals as part of therapy sessions, while days off were spent at Cilladon Pottery in Walthamstow, where she helped potter Priscilla McGirr and also met Michel.

Learning their craft
As part of his studies at Bordeaux University, Michel Ducos came to London to complete his year as a French assistant at Hackney Downs School. Here a chance meeting with Priscilla and her husband Don in a pub in Walthamstow led him to helping out at their pottery on Saturdays, meeting Heather when they were both in their early 20s.

“This is where we got used to stoneware clay and learned how to make our own glazes. Heather was developing her throwing skills and I learned a bit about clay and fettling, plus other simple tasks.

“Initially, I went to evening classes in London, but we learned the major part of our craft at Cilladon Pottery, which provided us with a form of apprenticeship.

“For the rest, we are mainly self-taught. I would say that to be a good potter first and foremost, you must have a love of clay and pottery, as well as patience, resilience and determination!”

Having made the decision to make pottery their main focus, the couple moved to Alford while still working part-time; Heather as an occupational therapist and Michel as a thatcher’s assistant.

Then as the pottery became busier and the business grew, they both left their jobs to become potters and moved to their present premises.

Tableware is made in high fired stoneware clay and terracotta clay is used for gardenware, tiles and special projects: “I also make and use a very large amount of paperclay for all my sculptures and occasionally porcelain for special designs.”

Inspiration and trends
The couple’s inspiration for designs comes from requests from customers and the trade, as well as studying trends and fashions.

“We visit galleries and exhibitions and talk to many potters. We read ceramics magazines and newsletters, as well as cookery reviews in national newspapers. For example, when a famous chef uses a certain type of pot, within days we will be inundated with requests for these pots, e.g. pestles and mortars and also Buddha bowls.

“Hand-thrown pottery has a distinctive attraction because not only does it feel good in the hand and is pleasurable to hold and use, but also, because it is handmade no two pieces can ever be the same.

We have always been a small-scale production pottery which means that we repeat numerous lines, including mugs, plates, teapots, etc. We used to make 20 to 30,000 pots per year, although in recent times we have slowed down a bit.

“In the 1970s and 1980s we couldn’t make enough pots, however nowadays we no longer supply big shops or accept large trade orders or do shows and markets. We only make small orders and commissions.

“For us, the most important and original idea is to make pots for everybody, so we work fast and hard to keep the prices affordable.”

Pottery process
The couple started with kick wheels but have been using electric wheels for the past 40 years.

“Kilns have greatly improved over the years and we have worn out eleven so far. Nowadays, they have computerised controllers, although we do not use other machinery and everything is handmade.

Michel says it is difficult to estimate precisely how long the process of making a pot takes.

“It takes several minutes to wedge the clay and weigh the lumps to try and make them all the same.

This is followed by 10 hours’ firing and 24 hours cooling before glazing and decorating, before returning to the kiln and firing for 12-14 hours depending on the packing, followed by 48 hours to cool.”

The couple also take on private commissions: “It is the mainstay of our business. Most of them are challenging, which is what we like. For example making ridge tiles for a church was different, while a 7ft x 5ft wall tile sculpture was also a challenge.

“We make mainly tableware and the range has grown to cover all the necessary pots for the kitchen and the table and have produced a limited number of ‘50 years’ celebration mugs, as well as a “We make our own glazes with a large range of matt and shiny glazes and all our wares are safe for use in microwave ovens and dishwashers.

“We also make one-off decorated pots to celebrate weddings, births and any other special events, as well as mugs and tankards with stamps applied for special occasions and fundraising and corporate ware, such as business gifts and personalised pottery.”

Bespoke designs
Over the years, Michel and Heather have made bespoke commemorative pottery for events including royal occasions, pots for Lincoln Cathedral, mugs for the British Antarctic Survey Team and mugs for Lincolnshire County Council.

The couple also create sculptures generally made from stoneware paperclay and have worked on many themes and garden ideas, as well as home sculptures.

“We accept commissions and among some unusual creations we have produced are a guitar for a musician’s retirement, a Gladstone bag for a doctor’s retirement and a fire extinguisher for a fire equipment company.

“Contact us with your idea and we will tell you if we can make it and give you a quote.”

They are also one of the few skilled potters creating timeless pieces using the traditional and historic method of rope pottery (Poterie à la corde), which uses a simple wheel to make very large pots.

“This method is still occasionally found in the South of France mainly for demonstration or for architectural size pots and, depending on who you ask, it originated in early antiquity (4,000 years BC), or in the 17th century or 19th century, and apparently there is an engraving of rope pottery making dating from 1421,” explains Michel.

“Whenever and wherever it started, the simplicity of this method of manufacture allows for some very impressive pots, made in one piece and only limited by the size of the kilns and the logistics of actually moving the pots from making to firing.

“I believe I am the only potter in the UK making this type of pottery and make these pots which measure up to one metre, for fun, although I do need help to move them.”

The couple’s sons William and Martin are in their 40s and Michel and Heather are hopeful that William, who is already a “very capable” potter, might one day carry on the unique Alford Pottery brand.

care greatly about our customers.

“The best part is doing what we want and being our own bosses. A lot of people would pay to do what we do!”