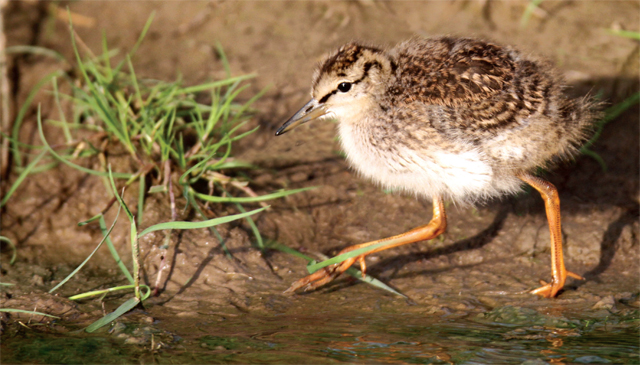 Giving back to nature

Caroline Bingham spent a morning in Burgh le Marsh on a farm owned by Jim Dodsworth and was shown around the wet grassland project that he and his family have developed with the help of Roger Wardle.
It didn’t really matter that it was raining quite heavily on the day I visited. After all, I was there to see a marshland project that has turned 180 acres of Jim Dodsworth’s Middlemarsh Farm into wet grassland. The land is still rented out and grazed productively with a suckling herd, dispelling the myth that it is either the environment or agriculture. The cattle have been joined by increasing numbers of breeding waders and wildfowl, and migratory birds as the reserve habitat has become established.

Jim, his wife Janet and son Simon operate Pinetrees Leisure Park on the land adjoining Middlemarsh Farm and provide an example of how the management of this part of the Lincolnshire coastal strip can be a combination of leisure facilities, farming and wetlands, which not only provide attractions for visitors but also employment and commerce for the local community.

Jim has worked hard since his days as a tenant farmer to accumulate the 350 acres he farms and his application in 2006 for change of use for 180 acres was a big step. The land had previously been planted with arable crops. “We have a big stake in the hospitality industry in the area and my wish was to not only create a green attraction for Burgh le Marsh but also to give something back to nature and the people of the community,” explained Jim, as we looked through archive pictures of the initial stages of the transformation.

That the project has been so well documented and executed is thanks to Roger Wardle, a wetlands and grassland consultant who now also works for the Lincolnshire Coastal Grazing Marshes Project based at East Lindsey District Council. In 2007 with Roger’s help a successful application was approved for Natural England’s Higher Level Stewardship Scheme that funded most of the work. Carefully designed excavations were undertaken to create pools and channels divided into fifteen discrete hydrological cells which hold and control the water. With support from the Lincolnshire Coast Grazing Marshes Project and valuable funding from the Esmée Fairbairn Foundation and later through the Heritage Lottery Fund, Roger was able to assist the enthusiastic Dodsworth family with the development and all-important habitat management.

Roger told me: “There were initial concerns from the Internal Drainage Board (IDB) that the project could cause local drainage problems. These were quickly dispelled when it was demonstrated that each of the fifteen discrete water cells would act as flood storage facilities with controlled flows of water into the IDB drainage system, avoiding surges at times of flood risk.”

We climbed into Roger’s 4×4 to visit Middlemarsh Farm and see how the water channels were coping with the recent downpours and the abundant wildlife already established. It is deceptive how much soil has been moved to create the shallow, concave landscape which surrounds each of the channels. Rainfall is gathered and flows to the centre of each ‘dish’ in the middle of which is a water ‘cell’. As a civil engineering task it has been immense and refinements are still being made. As a wetlands reserve, the land has been reclaimed by nature remarkably quickly and there is a timeless tranquillity to the landscape. Visitors can park in one of two car parks at either end of the reserve and walk along 3.4 kilometres of public permissive footpaths, much of it with disabled access. A length links to the Lincolnshire Coastal Path and there are three purpose-built hides.

As soon as we entered the reserve lapwings began to swoop and swirl around us trying to distract us from nest sites and clutches of eggs due to hatch at any time.

Roger warned me that I was probably a week too early to see any young lapwings, but pointed out numbers of red shank and avocets.

“Red shanks are known as an umbrella species.” he explained. “They are indicative of good wet grassland habitat and that in turn benefits other less well known species of equal importance to colonise the site.

“So far this year we have sighted golden plovers, little ringed plovers, ruff, whimbrel, greenshank and yellow wagtails which are a red listed RSPB bird and wood sandpipers. Scarce ducks including the attractive gargany have also been recorded. During the winter teal, widgeon and whooper swan can be seen attracting the peregrine falcon. You may also be lucky to see the short eared owl and continental bitterns pass through.”

Jim and I watched, trying to keep track of just some of the activity around us. Birds were rising and falling, feeding and swooping. He told me: “I have been staggered at how quickly, once we had sown the special grass mixes and introduced native plants, nature has shown its resilience and taken grip on the site.”

A little-known but threatened Lincolnshire native, the greater water parsnip has been reintroduced. Not on the menu for humans but a favourite with water voles, this plant is thriving along with clusters of cowslips, meadow butterup and knapweed to add patches of colour to the grassland.

We arrived at the top of one of the embankments and just above us frantic lapwing parents were trying to lure us away from their newly hatched brood of four beautifully marked chicks, probably the first of the season to appear. We quickly withdrew to avoid distress. It was a wonderful finale to my tour of the reserve. Simon, who farms the Dodsworths’ remaining acreage, has more plans for habitat improvement including establishing more tussock grass and more islands capped in stones for terns to nest upon. Lincolnshire Wildlife Watch groups are regular visitors to the site as well as Probus groups and tourists to the area.

Jim summed up what the establishment of Middlemarsh Farm Wet Grassland Project has meant to him: “I find it personally very satisfying and immensely therapeutic to sit and watch the wildlife here knowing that I have made a lasting contribution to leisure and tourism in this area and allowed nature to take up its rightful place on some of my land.”

You can visit Middlemarsh Farm Wet Grassland Project on Middlemarsh Lane, Burgh le Marsh by parking in one of the project designated car parks and following the linear path. Visitors should note that although the site is disabled accessible there are no toilet facilities within the reserve.