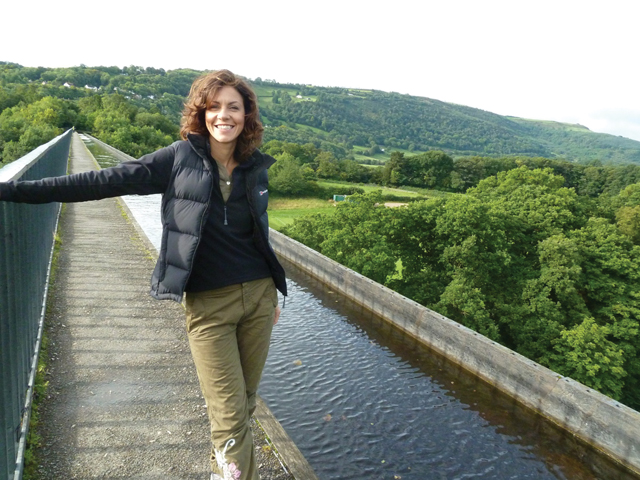 BBC Countryfile’s Julia Bradbury tells ‘Lincolnshire Life’ of a landscape love affair that keeps her coming back for more…
Nestled amongst the shrubs and greenery of Rutland lies a 400-year-old rectory where a little girl, when not exploring the wonders of the picturesque reservoir, would scrump apples from nearby orchards. That Julia Bradbury would go on to make a living out of what she loved doing most, walking, is down to application and knowledge, of course; but more than that, a perfect passion for the outdoors, as she tells ‘Lincolnshire Life’.

“My Dad is a Derbyshire lad, I was born in Dublin but I grew up in Rutland and went to school in Sheffield,” she begins. “From a very early age, probably about six, I’ve been exposed to the outdoors. What do I love about it? It’s so engaging. It’s all around you and there’s nowhere you can’t explore – it’s where your imagination and your walking boots will take you.”

Somewhat of a country bumpkin, Julia Bradbury first made a name for herself when landing one of the presenter roles on BBC One’s ‘Countryfile’. A clutch of walking documentaries and news jobs followed, notably ‘Wainwright Walks’, a stunning series first aired in July 2009 which saw Julia explore the Lake District, following in the famous footsteps of guide writer, Alfred Wainwright. It even earned her the title of ‘Walking Man’s Totty’!

Julia recently strapped on her boots again for a brand new walking series entitled, ‘Julia Bradbury’s Canal Walks’; a slightly easier stroll given the relatively flat terrain, save the odd series of locks! A new DVD accompanies her strolls in which she plots a route along a number of Britain’s man-made waterways, and learns the stories behind them.

Despite travelling the world with co-presenter Matt Baker, for Julia, home is where the heart is and her favourite outdoor partner is still her Dad. “My Dad was my walking mate and he’ll always be that. We still head out to this day – it’s a great relationship,” she says. “I was somebody who did the camping thing, I did the walking thing, tickled the trout, and all that stuff. And apart from when I was off scrumping, he was always by my side!”

Julia’s family moved from Dublin to Rutland in the 1970s. Attending Edith Weston primary school in Oakham, she did her O-levels in Sheffield before taking a job in advertising. A stint working in the family business back in her home county led to her first job presenting, with Chrysalis TV.

Nowadays, her busy schedule is filled with filming for Sunday night’s ‘Countryfile’ and walking the length and breadth of the country – for work, or for pleasure, following in the footsteps of ancestral warriors on the Viking Way, or treading the dusty footprints of industrial history on railway track beds slowly reclaimed by nature.

After any long walk, Julia likes to relax with friends and family: “Whether at home or staying with friends, there’s nothing like winding down from a long walk by having a good meal, with local food. And there’s doubtless a bottle of wine to savour as well.”

The Lincolnshire lady loves a bit of pub grub and she says there are plenty of places to explore around the breathtaking Rutland and Lincolnshire areas.

“The Olive Branch is a place that we go to eat – our favourite local,” says Julia. “Or you’ll find me and the family in Barnsdale Lodge, which is on the other side of the reservoir, opposite the house. I love a Barnsdale lunch, there’s a good bar in there too!”

Julia describes Lincolnshire as picturesque and beautiful, and insists she has always been quick to correct those who say the flatness of the land lends a certain starkness to it. “I couldn’t begin to tell you the number of people who describe where I’m from as flat or uninspiring or even bleak,” she explains.

“I don’t find it a boring landscape at all. It’s expansive and breathtaking. And the oolite stone that is used for the villages is absolutely beautiful. It’s the same stone that they use in the Cotswold, that lovely sandy golden colour, so really pretty. The landscape is definitely not as rugged as say the Yorkshire Moors or the Peak District – fair enough – but it has a very quaint quality to it. And I’d say it’s undulating rather than flat!”

Like Rutland and Lincolnshire, Julia believes that Britain as a whole has a great deal of undiscovered beauty, with variety leaping out of every copse and across every plain.

“We’ve got a terrific coast line too, which varies wildly,” she says. “People talk a lot about the Lake District which, geologically, is just fascinating, and stunning to look at. But there are great expanses all over, just waiting to be explored. I don’t think people have realised exactly what this country has to offer; you can do so much in Britain.

“You can go from the Scilly Isles up to the Highlands, and all the way engage in outdoor activities and pursuits, from canoeing and scuba diving, to swimming with seals; there’s just so much to do here.”

It’s for this reason that despite having a home in west London, Julia never moved away from Rutland. “I never left,” she says. “This place is still ‘me’, and it always will be. Sure, London is my work base, but Rutland and Lincolnshire are where I feel myself.”

But soon enough, the forty-year-old’s life won’t all be about mud trekking and mountain climbing, given that there’s a new arrival on the way.

Julia is now six months pregnant with what she has called ‘a miracle baby’. Suffering with endometriosis, Julia feared she might never fulfil her ambition to be a mum.

“I have no more plans for the rest of the year,” she reveals. “My next journey will be into motherhood!”

Julia and her partner, Gerard Cunningham, are expecting their child in August, and she accepts that this will undoubtedly be one of the most fulfilling challenges to date. But you get the feeling that, for someone who has taken on a raging Icelandic volcano, motherhood won’t be a step too far either!

BOILERPLATE
Julia Bradbury is the familiar face of ‘Countryfile’, ‘Wainwright Walks’ and ‘Railway Walks’. Her latest DVD, ‘Canal Walks’, which accompanies the BBC series, was released in June.