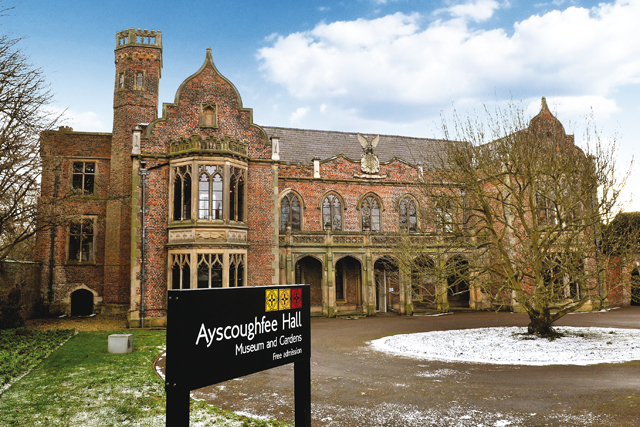 Grade One status for historic hall

If you love historic properties, are intrigued by tales of the past or just simply want to be impressed, there’s a Lincolnshire landmark that delivers!
Set your car’s sat nav on course for Spalding and seek out Ayscoughfee Hall, which lies a stone’s throw from the town centre and gazes out over the River Welland.

Today, Ayscoughfee, which stands proudly within five acres of beautiful parkland is deemed so precious that English Heritage has bestowed it with Grade One listed status.

In a nutshell, this distinctive property is officially among the cream of England’s 300,000 listed buildings. Just two-and-a-half per cent of those fall into this prestigious category.

But what is so special about this one-time wealthy merchant’s house, which is now a museum owned by the people of Spalding, and whose roots can be traced back 500 years?

Decorative and imposing, the early medieval Ayscoughfee was an ‘H-plan’ building with two wings and a central hall. One wing, housed the family rooms and it had a tower attached.

Inside, the spiral staircase, still in place today, linked the Lord’s bedroom with the Lady’s bedroom. Precious family possessions would have been stored in the undercroft.

The other wing provided the ‘service rooms’ including the kitchens, guest apartments and a brick-vaulted staircase, which provided a discreet access. You can still see the remains of this.

Over the centuries, Ayscoughfee’s obviously wealthy residents have made changes to the hall, reflecting changing architectural fashions.

Examples include the eighteenth- century Georgian ceiling and details, the 1840 neo-Gothic façade, Adam-style plasterwork and a liberal splash of Victoriana. In the library, the mahogany recessed bookcase even cuts through to the medieval staircase.

A succession of families lived at Ayscoughfee, so it has plenty of tales to tell. And, just in case you were wondering, some people are also convinced it has ghosts!

Intrigued? Then why not take part in one of its Paranormal Investigations, for an experience that takes you beyond the parts of Ayscoughfee which are out of reach of the general public?

Museum officer, Julia Knight said: “This was a family home for many years and inhabited by various families from 1450 through to the end of the nineteenth century. That is unusual.

“The fact that it is still surviving, when so many other homes around the country haven’t, is amazing. We feel very lucky to have it.”

The Hall, which has been a museum since 1986, was closed for major refurbishment and repair in 2003. A revamp and interpretation work carried out between 1999 and 2006 helped to unearth new items and information, including the fact that the roof timbers are older than originally thought. These findings help Ayscoughfee to achieve its new status.

“We’re absolutely delighted that our listing has been upgraded to Grade One, it reflects the significance of the hall and its importance regionally and nationally,” said Miss Knight.

Tradition has it that a wool merchant, Richard Aldwyn, built the Hall – which lies at the lowest crossing point on the River Welland, for miles, where goods could easily be loaded onto barges. However there is no evidence to support this.

Ownership passed to the Ayscough family, who were landowners who originally hailed from Stallingborough, near Grimsby. (Ayscoughfee may be a corruption of the Ayscough Fee Hall – a Fee was an area of land given to a knight by a monarch). Whatever the truth, by 1556 the Ayscoughs no longer owned the house.

Maurice Johnson (second) inherited the property on the death of his father in 1747. The avid collector and antiquarian is thought to be responsible for bringing the wonderful stained glass Oriel window to Ayscoughfee. This is a beautiful feature.

Johnson’s interest in antiquities led to the formation of the Spalding Gentlemen’s Society in 1710. This was one of the earliest in the country and members included famous names, including Isaac Newton, Lord Tennyson and Alexander Pope. The Society still meets.

The Johnson family had the property from the seventeenth until the end of the nineteenth century, but it did get rented out at times. The last tenant was Charles Bonner Foster and his family in 1874.

Isobella Johnson finally sold this magnificent pile to a Committee of Spalding Citizens in 1898, for the princely sum of £2,000. It is now managed by South Holland District Council.

Though decorative and imposing, the first thing you notice about Ayscoughfee when you step through its doors, is how airy and spacious it is.

Your eyes are naturally drawn to the wonderful first-floor balcony and high ceiling, which give an instant impression of its original grandeur. On the ground floor you can explore the intimate library, which is bursting with books, the Victorian kitchen and range, and a large room which contains items of historical interest and which is also ideal for wedding ceremonies.

The Georgian staircase leads up to the balcony and further rooms which contain further exhibits that give a real flavour of Fenland life in days gone by. Exhibits include a punt gun – which was capable of killing up to thirty ducks in one go!

You should complete your visit by enjoying a wander through Ayscoughfee’s five acres of garden, which contain a war memorial designed by Sir Edwin Lutyens, an ice house dating from the 1700s, impressive yew hedges and a lake. There is also a café.

“We attract between 22,000 and 24,000 visitors a year. Obviously we would love to increase that, especially with our increased events programme that we hope will appeal to a wide variety of people,” added Miss Knight.

Tony Calladine, head of designation for the East of England at English Heritage said: “English Heritage is pleased to have been able to recognise the outstanding importance of Ayscoughfee Hall, by recommending the upgrading of its listing to Grade One.

“It is a wonderful, multi-period building with great interest in its phases of development and a wonderfully complete and beautifully preserved, medieval roof with complex medieval carpentry of the highest quality.”

South Holland District Council’s heritage champion, Councillor Christine Lawton said: “I am very proud for the people of South Holland that this architectural gem has been recognised and has been awarded Grade One status.”

AYSCOUGHFEE GHOSTS
There’s some debate about whether Ayscoughfee Hall is actually haunted – but the brave have the chance to make up their own minds, by visiting this unique property ‘after dark!’.

Museum officer, Julia Knight said: “People have said that a White Lady has been seen floating past the downstairs windows, that they have smelled smoke in the library and other areas and also heard children’s voices.

“However, I have never seen, smelled or touched anything and neither have my staff, so we are skeptical.”

Dru Hunter of UK Ghost Hunters, who runs public Paranormal Investigation sessions at the Hall every two months (in addition to being involved in ongoing private investigations), sees things differently.

“We stage sessions where we set up scientific equipment, including electromagnetic field and environmental meters, as well as video and CCTV cameras, so that groups can see what is happening,” said Ms Hunter.

“We have not witnessed the White Lady, but we have smelled smoke, seen mist on photographs, noticed light anomalies and felt an unseen cat rubbing around our ankles. We have also heard children’s voices and, being a medium, I have made contact with a little boy.

“There is a positive, but quite buzzy atmosphere at night, and I think there is definitely something unexplained going on,” she added.

Up to twenty people at a time attend the Paranormal Investigations sessions, which take them into private parts of the house, including the roof area and medieval bedrooms.