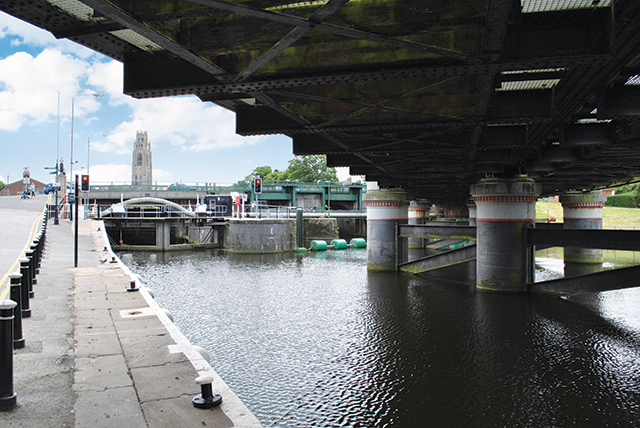 Grand by name, grand by nature and 250 years old

One of Boston’s most significant developments has its 250th anniversary this month. Grand Sluice can be seen up the river from St Botolph’s footbridge, at the same time taking in a view of Boston’s other iconic structure, the Stump (St Botolph’s Parish Church).
Many thousands pass over Grand Sluice every day, but many may not realise that it is more than just another bridge over The Haven. Its construction coincided with, some might say delivered in great part, a major industrial expansion of Boston and its population, becoming the largest town in the county.

Grand Sluice was the Boston Barrier of its day – a structure to control waters in the River Witham, separating the tidal Haven from the non-tidal river sweeping down across country from Lincoln and beyond. The incorporation of a lock secured river navigation. It stopped what had been regular flooding between Boston and Lincoln and allowed reclamation of 111,000 acres of productive agricultural land.

In the true no-limits British engineering style of the day Grand Sluice was not built on the river; it was built on a greenfield site and then the river was brought to the sluice – diverted from its original course, tamed and canalised. Today houses occupy the wide and meandering course of the old river in the Fydell Street, Orchard Street and Castle Street areas. Most of Witham Way Country Park has been developed on one of the widest former stretches of river and marsh.

Sluices had been constructed to prevent sea flooding from 1142 onwards, but agreement was reached in the 1760s to build a much more substantial and long-standing structure and to straighten the river to a scheme developed by engineers John Grundy, Langley Edwards and John Smeaton.

Construction began in 1764 and was completed two years later. The lock was enlarged in 1881.

A wooden railway bridge alongside Grand Sluice was built in 1848 as part of the Great Northern Railway London to Lincoln and Grimsby route. It was replaced by the current railway bridge in 1885.

Boston Borough Councillor Richard Austin has led the Grand Sluice 250th anniversary group. He said: “We couldn’t let this important date in the history of one of Boston’s most important developments pass by without notice.”

It is possibly the earliest surviving tidal outfall sluice still in a substantially original state, and it continues to serve its original purpose.

A new information board, provided by Boston Borough Council, Lincolnshire County Council, the Environment Agency, The History of Boston Project, ICE – the Institution of Civil Engineers, the Society for Lincolnshire History and Archaeology, Witham East Placecheck Group, the Canal and River Trust and Internal Drainage Boards, telling, with illustrations, the story of Grand Sluice, is to be unveiled at the site on Monday 10th October, by the Lord Lieutenant of Lincolnshire, Mr Toby Dennis, at 10.15am. All are welcome to attend. Afterwards he will board the decorated Boston Belle for the ceremonial passing through the lock of the Grand Sluice to the site of the proposed new Boston Barrier and returning.

A plaque dedicated by ICE and attached to the Grand Sluice will also be unveiled.

On Monday 3rd October, ICE will present a lecture about Grand Sluice by local historian and industrial archaeologist Neil Wright. Neil’s talk will describe the engineering challenges the project faced and its impact on Boston and the surrounding fens. The lecture, beginning at 6.15pm at the White Hart, is free but places must be booked at www.ice.org.uk/events/grand-sluice-boston-250th-anniversary

THE ENGINEERS
John Grundy lived in Spalding from 1739 and his legacy is his report books – seventeen volumes containing copies of his reports and supporting documents from most of his drainage and navigation schemes and in some cases the only surviving records of some major engineering projects. They were rediscovered in 1988.

Langley Edwards lived at King’s Lynn and worked on navigation projects for the Rivers Nar, Ivel, Blyth and Nene. His report on the Grand Sluice project said: ‘…it will be a lasting honour to those who are the promoters of it; a great addition of fortune to those who have the property in the land to be regained; a great and extensive benefit to trade and commerce by opening a certain inland navigation from Boston to Lincoln… a great addition to the health of all the inhabitants of the circumjacent city, towns and villages, by removing the cause of those noxious vapours which must arise from stagnant waters, and which by the various action of the winds, are wafted into the nostrils of those who are seated within reach thereof’.

John Smeaton was the most accomplished of the trio. In addition to being regarded as the father of civil engineering, he was also an accomplished mechanical engineer and a physicist.

He left his father’s law firm to become a mathematical instrument maker and developed an instrument to study material expansion and a maritime navigation aid. He won a national award for his work on the mechanics of waterwheels and windmills, contributing to the efficiency of water power. The lift equation used by the Wright brothers to get the first aeroplane off the ground was due to Smeaton, who calculated drag coefficient as part of his energy from waterwheels and windmills work.

He went on to design the third Eddystone Lighthouse (dismantled and re-erected at Plymouth Hoe and known as Smeaton’s Tower), pioneered use of mortar which could set under water and developed a technique for dovetailing granite blocks. His work led to the invention of Portland cement.

His commissions included the Calder and Hebble Navigation, the Coldstream Bridge over the River Tweed, Smeaton’s Pier in St Ives, Cornwall, the Perth Bridge over the Tay, the Ripon Canal, the viaduct which carried the Great North Road over the River Trent, the Forth and Clyde Canal, Banff harbour, Aberdeen bridge, Peterhead harbour, Hexham bridge, the Birmingham and Fazeley Canal and St Austell’s Charlestown harbour in Cornwall.

He was the first ‘expert witness’ to appear in a court when he gave evidence in a case regarding silting up of the harbour at Wells-Next-The-Sea in Norfolk.

He coined the term civil engineers, founded the Society of Civil Engineers and is one of six civil engineers immortalised in stained glass at Westminster Abbey.