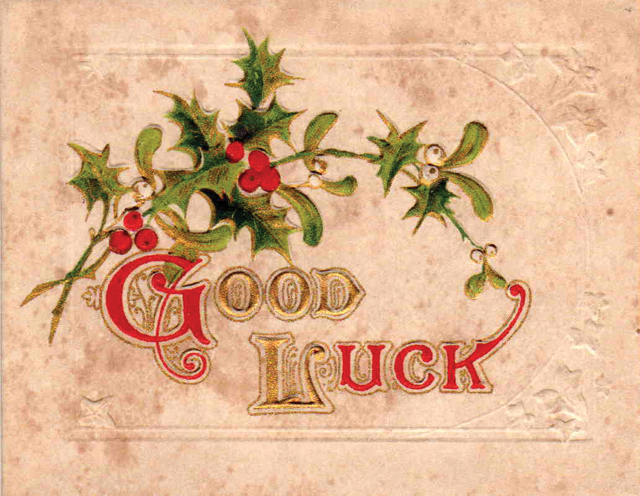 Greetings from Christmases past

In the latter years of the nineteenth century a young Lincolnshire girl began collecting Christmas and New Year cards. Each year, as greetings from friends and family rolled in to her Coningsby home, Kate Babington carefully stored the cards away, until she had a collection of some seventy or more.
At this time the greetings card was still something of a novelty, although gaining popularity year on year. Their designs varied widely, and often seem somewhat extravagant to modern eyes. Few had the images that we usually associate with Christmas today; there were no robins, no snowmen, and no baby Jesus lying in the manger, waiting for the Wise Men to appear. Sometimes, though, more traditional themes did appear in the form of red holly berries against green leaves and the occasional sprig of mistletoe. Whatever their design, the cards were sentimental in tone, with heartfelt greetings couched in remembrance of friendship, times past and hopes for a bright future.

The images to be found on Kate’s cards often seem to be at odds with the Christmas season. Spring flowers bloom and blossom on many of the cards, twining around little vignettes of homely cottages or distant landscapes. Then you remember that in the Victorian and Edwardian eras, people were well-versed in the subtle language of flowers. Violets, for faithfulness, pansies signifying ‘thinking of you’ and ‘forget-me-nots’ for memories – each had a special meaning in those days. One other significant plant abounds on these greetings cards and that is ivy. This plant showed that the sender and the recipient were linked by bonds of eternal friendship, as in the old song, ‘Just like the ivy, I’ll cling to you.’

Many of the cards that made their way to Kate’s Lincolnshire home had sculpted edges, with scrolled and flowered borders and delicate ribbons looped along the fold of the card. Others had inserts of paper ‘lace’, delicately pressed out by precision machinery to make a frame for the central image. Each card was individual, varying in theme, shape and size from all the others cards in Kate’s collection. All kinds of other images decorated the greetings cards: horseshoes, lucky clover, playing cards, even an anchor and ship’s wheel in one example – perhaps the sender of this card, Ethel, was far away across the sea. One of the more surprising images, to our eyes, is that of a young chick bursting from an egg. Rather than a Christmas card, this one looks as if it should have been saved until Easter. Even so, with such a wealth of artistic detail, it is perhaps not surprising that these decorative and appealing cards were kept as treasured mementos for so many years.

As some of the cards bore the address as well as the name of the sender, it was possible to track down a few of Kate Babington’s correspondents. However, some senders are more mysterious and their connection with Kate and her family is now lost. One of these was Albert W Eveleigh, who sent cards for several years from his home near London. Another gentleman who favoured Kate with a card was Frank M Wetherall, of Spring Place in Leeds. Perhaps they were admirers of Kate as she grew to womanhood. Other cards were obviously from family members and other loved ones. Her brother, William, and nephew Freddie, sent cards as did friends, Louie, Mabel, Minnie, Nellie and Violet.

Several of the cards showed that changes had taken place in Kate Babington’s life. One, from a Nurse Aline, was addressed to Kate at the home of her married elder sister, Mrs Elizabeth Kiss, with whom Kate was then living. The front of the card shows a radiant golden sun, its rays shining through a drift of violets and ivy. The verse reads,

As this particular Christmas approached, Kate may have needed some words of comfort. Some time before, her widowed father had died, leaving Kate in need of a new home. Luckily, she was taken into the home of her elder sister, Elizabeth and her solicitor husband, James Kiss, who lived at Ida Road in Skegness. Mr and Mrs Kiss also had a small son, doubtless a favourite with his aunt Kate, who went by the splendid name of Thomas Eric Babington Kiss.

As Kate Babington’s life entered a new phase her treasured collection of cards went with her. Perhaps as she reached adulthood her passion for collecting faded away. However, the greetings cards from her childhood were evidently kept for many more years, perhaps in a decorative box tucked away at the back of a drawer. Maybe sometimes Kate would take out her treasures and think of days gone by and her Lincolnshire childhood. Whatever the case, the day inevitably came when her effects were cleared. Her collection of cards made its way onto the open market, ending up in a glass cabinet in an antiques centre. That was where I found these reminders of a bygone age, still bundled together as they had been for over a century. Now, once more, Kate’s cards give pleasure as evocative reminders of friendship and remembrance that endured throughout the years, renewed time after time at that most special of festivals, Christmas.