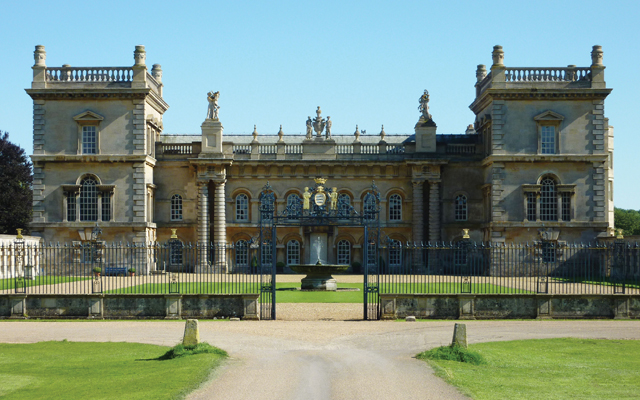 “Jakie, is it my birthday, or am I dying?” So asked US-born British politician Nancy, Viscountess Astor of her son on 2nd May 1964. His reply to these, the last words she ever spoke, was, “A bit of both, Mum.”
This exchange took place at Grimsthorpe Castle, Lincolnshire, fifty years ago, when Nancy Astor stirred momentarily to see her family gathered around her bed. The words were addressed to John Jacob (‘Jakie’) Astor, her youngest child. Nancy Astor was such a leading figure in early twentieth century politics that I was intrigued how these events came to take place in Lincolnshire; albeit at what is Lincolnshire’s grandest house, close to the picturesque village of Edenham. Here there are stone cottages, a large church shaded by 100-year-old cedars, the shaft of a medieval cross and a nearby vicarage, where Charles Kingsley is reputed to have written ‘Hereward the Wake’ in the 1860s. History proliferates.
Grimsthorpe Castle is the home of the Earls of Ancaster and it is the family monuments (the Willoughby de Eresby fraternity, i.e. the Dukes and Earls of Ancaster) which really stand out in the church. The 12th Baron fought and died at Edgehill in the arms of his son, who fought in turn at Naseby and was brave enough to attend the funeral of King Charles I. A monument to the 3rd Duke tells us that he lived ‘with magnificence and liberality’, but died of a ‘lingering, bilious disorder,’ which sounds like an acute case of over-consumption. The de Eresby family have been here since 1516, when the castle was granted to the 11th Baron Willoughby de Eresby on the occasion of his marriage to Maria de Salinas, a lady in waiting to Catherine of Aragon.

The castle stands in 2,000 acres, about four miles from Bourne, and can easily be seen more than a mile from the road. It is not a castle in the strictest sense of the word, much of the structure having been constructed in times when grandeur and comfort were more important than defensibility. It has a magnificent chestnut avenue and is noteworthy for herds of red and fallow deer. Most of the original, quadrangular building, with central courtyard was erected by Charles Brandon, Duke of Suffolk, who was close to Henry VIII, as vividly portrayed in TV’s The Tudors. Brandon had married the 11th Baron’s daughter, who had inherited the estate as a seven year old, in 1533. Henry VIII would grace his confidant Brandon with his presence in 1541 when he paid him one of his stately visits. Some of the edifice is older than Brandon, however, with a bastion in the south-east corner dating back to the thirteenth century.

Sir John Vanbrugh was employed to rebuild the castle’s north side using stone quarried from the estate in the early eighteenth century. This would be Vanbrugh’s last great achievement as he would die four years after completing this notable commission. The magnificent chapel, begun by Vanbrugh, had to be completed after his death – in all likelihood by his protégé, Nicholas Hawksmoor – and is an oasis of calm today. Vanbrugh’s magnificent 100-foot great hall is testimony to how the Willoughby de Eresby family came by their considerable wealth; here hang portraits of seven kings served by members of the family in the role of Lord Great Chamberlain. It was this influential position which enabled generations of the de Eresby family to accumulate thrones and fine furnishings from the old House of Lords. It was the 17th Baron who splashed out on Vanbrugh following his ennoblement as the First Duke of Ancaster and Kesteven. He would have been dismayed to learn that his impressive new façade was already out of fashion by the time it had been completed in 1726.

The castle also has a surprising Jane Austen connection, for Jane’s eldest brother, James, married the eldest daughter of General Edward Matthew – whose wife was Lady Jane Bertie, the daughter of the 2nd Duke and Duchess of Ancaster, of Grimsthorpe. The sole issue of this marriage would be Anna Austen, Jane Austen’s niece, who was born in 1793.
Some of the treasures that adorn the castle are almost beyond description: the ‘dress’ worn by Charles I for a portrait by Van Dyck, which is also present; coronation chairs, including that used by George IV at his coronation banquet; robes worn by sovereigns since James II; the House of Lords clock which stopped at the moment George III died and the table on which Queen Victoria signed her accession. By comparison the Brussels tapestries and paintings by the likes of Lawrence and Reynolds seem almost humdrum. In spite of the house’s external grandeur and rich fittings, many rooms have an intimacy, a very human scale, unusual in a house of this size.

It is also worth mentioning that the castle grounds were utilised by the armed forces in both the First and Second World Wars; the Royal Flying Corps / RAF having an emergency landing ground in the first conflict, whilst a company of the Parachute Regiment was based here in WW2, preparing for the assault on the bridge at Arnhem.

The spectacular house is not sold short by the gardens either, which surround the castle on three sides and were landscaped by Capability Brown. Further from the castle the garden becomes semi-wild with woodland and spring bulbs. The topiary gardens are overlooked by the castle’s irregular Tudor south front; the west front overlooks the lake and colourful herbaceous border – particularly in the summer – whilst the east front looks down on formal gardens and a walled kitchen garden. That lake was where composer Thomas Linley the younger (the ‘English Mozart’) met an untimely death whilst staying at Grimsthorpe in 1778, aged just twenty-two. The sailing boat in which Linley was enjoying the lake capsized and the young performer’s attempt to swim to shore ended in tragedy, his lifeless body not being recovered for forty minutes. Linley was buried in the church at Edenham among the monuments to his hosts.

So, what of Nancy Astor? How did the lady from Danville, Virginia, USA, come to die at such a grand example of the English stately home? Nancy Witcher Langhorne was born into a prominent family in 1879 and moved to England following her divorce from her first husband, Robert Gould Shaw II in 1903.

She then married English politician William Waldorf, 2nd Viscount Astor in 1906. William was proprietor of The Observer newspaper and MP for Plymouth from 1910. When he moved up to the Lords in 1919 it was Nancy who succeeded him in the lower house as Conservative MP for Plymouth (Sutton Division), becoming in the process the first woman in British political history to take up her seat in the House of Commons. Nancy Astor’s maiden speech was delivered on 24th February 1920, in which she strongly advocated the return of the strict drinking laws that prevailed during the Great War. We could do with a few more like her today. She would continue to hold the seat of Plymouth, Sutton until her retirement from politics in June 1945 and was also Lady Mayoress of Plymouth during the Blitz.

Nancy was known for her interest in social problems, especially temperance. She devoted much time to the causes of women and children, education and nursery schools. She also became involved with the cause of appeasement in the years leading up to World War II.

She was also an authoress, having penned a book about her life, ‘My Two Countries’ (1923), and was outspoken and quick-witted, becoming well known for the weekend gatherings at Cliveden, the Astor family home. She was also a fascinating lady of contrasts: favouring temperance, yet liking to ‘throw a party’; outspoken and independent, yet needy of her friendships; wealthy yet generous; liked and disliked in turn.

Nancy had six children (five boys and one girl) and it was the girl, Nancy Phyllis Louise Astor, who married Gilbert James Heathcote-Drummond-Willoughby in July 1933, thereby becoming Countess Ancaster and establishing the Astor link to both the Willoughby de Eresby family and Grimsthorpe Castle. It was therefore at her daughter’s home at Grimsthorpe that Nancy Astor passed away in May 1964 and where she uttered those memorable last words. Having come into this world in the same month eighty-four years before, those musings on birth and death were entirely appropriate.

Grimsthorpe Castle has much history to impart from the medieval and Tudor times, through Vanbrugh and the Austens to the more recent history of Nancy Astor. Absorbing knowledge can be dehydrating though, so respite is provided by the Georgian Coach House, now converted into a comfortable licensed tea room with seating for over fifty, with outside benches tempting on sunnier days. Knowing the contradictory character of Nancy Astor, I’m sure that she would have approved of licensed premises that also purvey a traditional pot of English breakfast tea. Afternoon tea, after all, is still a recognised part of visiting historic houses. Close to the Coach House, the old stables have been converted into a shop, with many items unique to Grimsthorpe, including honey harvested from the edge of the estate.

The link with Nancy Astor and her passing in 1964 lives on today. The current owner, the 28th Baroness, is the granddaughter of that eminent lady who moved from the States to England, forged a career in politics and became the first lady MP to ever take up her seat in the House of Commons. That in itself is worthy of a pause for reflection when you next visit Grimsthorpe.